How to calculate the FIDE Percentage Expectancy Table

Section 8 of the FIDE Rating Regulations provides the following table 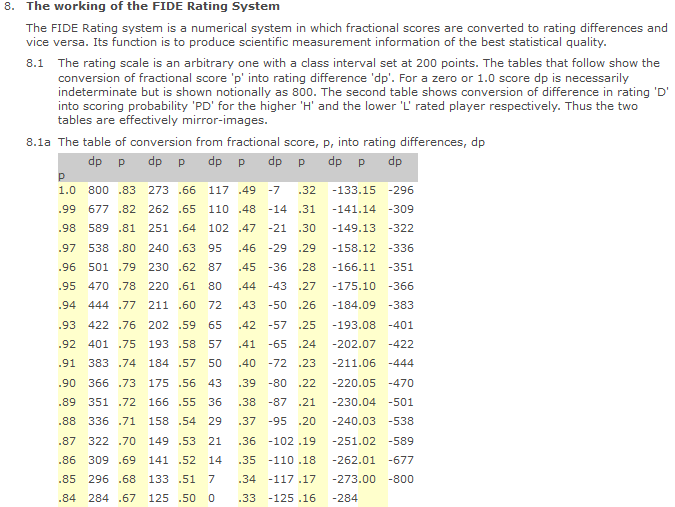 I understand that dp=800 and dp=-800 are arbitary caps at the top and bottom of the table.

However, in relation to the other scores, what's the formula for the conversion of p into dp, and vice-versa?

As noted in the comments, the regular Elo formula almost works but does not quite work. Does anyone know what the formula is for the adjustment made in the tails?

That table is based on the expected score formula mentioned here:

but it's also possible to directly generate table 8.1b from this formula. For example, a rating difference of 92 points (in A's favor) leads to EA = 0.6294.

The inverse formula, calculating the rating difference which corresponds to a certain expected score, is RB - RA = 400 log10(1 / EA - 1).

As stated in 12.1 the formula above gives a close approximation to tables 8.1a and 8.1b. However it does not explain the precise construction of the table. Take fore example Rb-Ra = -736. According to the table 8.1b, the resulting expectation equals 100%. But according to the formula, the expectation is 98,57%.

2
Probability of winning based on Elo rating