For long OTB games, what is the percentage of players who have a rating which is below X FIDE Elo?

I am looking for statistics on the FIDE Elo of chess players.

I would like to know what is the percentage of players who have a rating which is:

I'm making it clear that I am only interested in statistics for the FIDE Elo, not the USCF Elo. And I am only looking for statistics for OTB games (not correspondence) of long time control (not rapid, nor blitz).

You can get the FIDE rating list here. I used R statistical software to analyse the data for the latest OTB rating list (of 15th Sep. 2014). At the moment there are 383543 active FIDE players. Among them, slightly less than one third (107320 players) are rated.

As noted by others, the FIDE rating floor is 1000:

"Players whose ratings drop below 1000 are listed on the next list as ‘delisted’. Thereafter, they are treated in the same manner as any other unrated player." (FIDE Rating Regulations effective from 1 July 2014, article 7.21).

From that I understand that players going below 1000 Elo are unrated at all effects. However, the list shows 14 people with a rating of 0 (I do not know what this means, though). 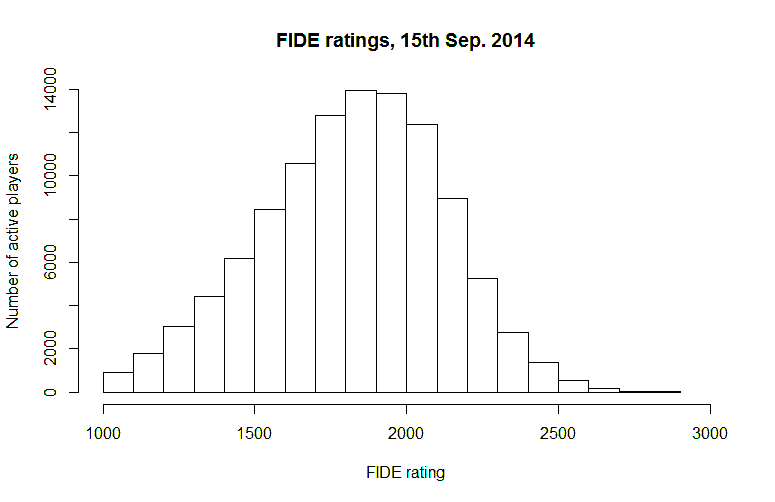 According to this site http://www.metrowestchess.org/Compete/FIDE/FAQ_FIDE_Ratings.htm, the absolute FIDE floor is 1000 so the answer to your first five bullet points would be 0.

I found the absolute number for each of your last 2 bullet points here http://en.wikipedia.org/wiki/Elo_rating_system#FIDE_ratings but have been unable to locate a figure on the total number of rated players in the world so I can't tell you percentages. According to that link, there are about 11000 players above 2200 and 800 above 2500.

Not the answer you're looking for? Browse other questions tagged rating statistics elo otb-chess or ask your own question.

5
Where can I find a rarity table of chess player ratings?
7
Elo distribution

6
Weighted adjustment for relative Elo
2
What would approximately be the ICCF rating of a GM with no external help and of a computer with no human judgment?
5
What is the percent of players in the top X that are women for different values of X?
4
What is the percentage of players who are women in the sections where both men and women can play in?
2
In Swiss tournaments, is it common to play weaker players when playing White?
25
How do age and initial rating correlate to decline in playing strength with age?
7
Why do women have a lower Elo requirement to obtaining (women) FIDE titles?
0
What sets the absolute value of players' Elo rating?