While browsing the Chess and Puzzling Stack Exchange sites, I've come across several instances where people have found loopholes in the rules of chess, causing these loopholes to be patched out eventually. In fact, while reading through the current (since Jan 1, 2018) FIDE Laws of Chess, I noticed the following paragraphs:

It is not mentioned which pieces start closer to which player, so according to this interpretation, it is technically not illegal to start with the white pieces on the side of the board closer to Black. "Front" would then mean that pawns could only move one step (assuming you get the pieces out of the way), but not promote afterward (since the promotion rank is defined in paragraph 3.7.5.1 as "the rank furthest from its starting position"). Alternatively, a player could rotate the chessboard by 180° before moving.

I'm aware that all this is nitpicking the rules, of course, that's not the intended way to play chess, I get that. So here's the question I'm actually interested in: Suppose that during a FIDE tournament, some player makes a move that is legal only by one of the above interpretations of the rules. How would this situation be resolved properly, considering Articles 11 and 12 of the Laws? 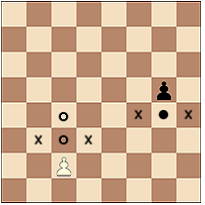 Not the answer you're looking for? Browse other questions tagged rules fide pawns loopholes or ask your own question.

9
Draws, en passant, and the FIDE's 2014 rulebook revision
6
According to official FIDE rules, when queening a pawn, can you pause the clock?
14
What is the result? (Rules + puzzle)
14
FIDE threefold repetition and possible moves
13
Touching a captured queen -- must I promote to it?
10
Official rules for castling in Chess960? (Is there a loophole?)
7
Does a loophole still exist in the defintion of castling?
17
What is the process for amending the rules of chess?