This is a task related to this question: Theoretical limit for the number of consecutive checks?.

By a sequence of consecutive check, what we mean is white giving check, black replying with a check, white replying to that with a check and so on. Note that we are talking about a theoretical situation so that 50 move rules or three-fold repetition are irrelevant.

In the linked question, he is asking for the longest sequence of consecutive checks with two conditions:

Suppose we remove the 2nd condition, and relax the 1st one to allow more pieces than legally possible (say, 9+ white queens or 3+ white knights). With these relaxations, is it possible to have an infinite sequence of consecutive checks?

I think the answer to the above question is no (but no complete proof yet).

If such an infinite sequence is there, it should contain a loop for sure. Therefore, the sequence cannot contain pawn movements or captures.

PS: For this question, I am not interested in involving fairy chess pieces or chess variants.

No, it's impossible to have an infinite sequence of checks

Let's remember that there are 3 ways to parry a check :

2 and 3 aren't sustainable over an infinite number of moves, because the chessboard has finite space, only 64 squares and necessarily less pieces than there are squares. So the only way to get an infinite cycle of checks going would be for both Kings to escape checks with method 1, by continually moving them.

This also implies that the King movement gives check. Since Kings can't come into contact, that means their movement must deliver a discovery check from a long range piece. This in turn, implies that after each move, both Kings stay aligned over some axis (rank, file, or diagonal), otherwise there would no longer be any discovery checks for lack of an alignment.

Let's say we're in such a position and it's Black to move. To summarize the constraints, the Black King must :

Hence, from all the above, I'd conclude that under the normal rules of chess, it's impossible for both players to perform at all an infinite cycle of checks. This is also valid under the 2 conditions you mentioned in your question, as they don't affect the reasoning used here.

As Umlin proved, it is impossible to have infinite mutual checks. However, that is with the standard set of chess pieces. With fairy chess pieces, it is indeed possible to have an infinite series of checks by both sides. I remembered a simple example from Tim Krabbe's Diary Entry #120, entitled "Mutual Discovered Perpetual."

In the example, the knights are acting as Nightriders, knights with an infinite range in one direction, aka line pieces. Both sides can mutually give check forever.

For reference, the original publication can be seen in The Problemist Archves on the British Chess Problem Society website. It is also in the Die Schwalbe Chess Problem Database. 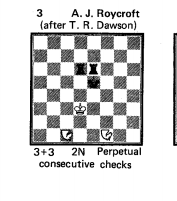 Not the answer you're looking for? Browse other questions tagged problems check or ask your own question.

19
What is the theoretical limit for the number of consecutive checks?

43
Can a piece pinned to my king put the opponent's king in check?
19
What is the theoretical limit for the number of consecutive checks?
7
Retrograde analysis of a position in "The Flanders Panel"
7
What is the longest possible sequence of double checks?
11
Outside-the-box mate-in-one challenge