Is chess a zero sum game?

"Chess is a zero sum game" is a claim you see often, even on this forum.

Game theorists will tell you that it is just obvious. Either the game is a draw, nobody wins or loses, or one side wins and the other loses. A win is equal and opposite to a loss and a draw is worthless. QED.

Economic trade is a classic example of a non-zero sum game. In fact it is a win-win game. If that weren't the case then there would be no trade. Nobody would trade freely if they knew they were going to lose in advance.

psychology evaluation
Share
Improve this question
asked May 7 '20 at 15:30

Edit: let me add something because this answer seems to be misunderstood. FIDE ratings are based on game scores (see the Mathematics of Elo Ratings. It was created by Arpad Elo as a method for calculating the relative skill levels of players in zero-sum games such as chess. A player's Elo rating is represented by a number which may change depending on the outcome of rated games played. After every game, the winning player takes points from the losing one. So, if chess is a zero-sum game, so are the FIDE ratings!

The question then is: are FIDE ratings a zero-sum game because of pairings of players with different K-factors? A question I reinterpreted in a more provocative way: is chess empirically a zero-sum game?

As stated in Brian Towers' answer:

In the May 2020 FIDE list of the standard rating (see here), I observe a distribution of K-values for 2,700 players rated with

The distribution is as follows:

Then, I plotted the estimated probability density function of the difference between their rating in April and May (given that the formula for updating a player's rating is based on the expected and the actual scores of the games played). As expected, the difference is centered on zero because the points lost by some players are won by others. 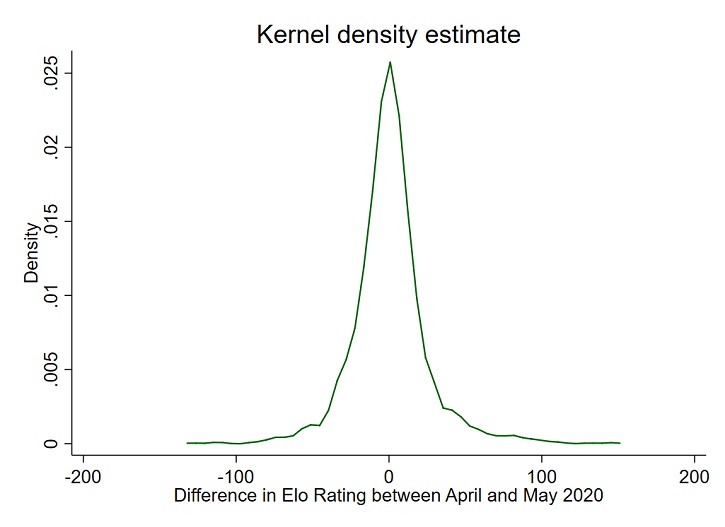 However, the sum of points gained is greater (23,144) than the sum of points lost (-21,564), which represents an average gain of +0.59 per game. However, this average is not statistically different from 0! Conclusion: we cannot reject the hypothesis that chess is (empirically) a zero-sum game!

One caveat: I did not observe the results and matches of these players; I assumed that the points won by some players in this list are lost by others in the same list.

This aside, I like very much the point about the experience gained and the sharing of ideas during and after a game, which suggests that "chess is anything but zero sum"!

When I said chess is a zero sum game in that answer, I wasn't referring to anything involving ratings. Obviously if we include ratings then chess isn't strictly a zero sum game, since the gains and losses aren't always balanced out. But different rating systems are arbitrary, and aren't part of the game of chess itself.

Your question should be "Is the FIDE rating system a zero sum game?"

Chess is a zero sum game. There is 1 point available and it is divided over the players, what one gains the other loses. It is a simple concept with a simple answer. Tournament rules mention some very rare cases where the result is 0-0 or 0.5 - 0, but in my opinion those are "outside the game". That a mobile phone may ring is not really a matter for the game theoretical analysis of the game of chess.

Chess games played in tournaments are not zero sum, but the tournament as a whole is. There are many situations where e.g. neither player wins anything in case of a draw, but a win by one of the sides puts that player in a prize-winning position. Not zero-sum. But a chess tournament, viewed as a multi-player game, is not the same game as chess. And the tournament as a whole usually has a fixed prize pool and is thus again zero sum.

Ratings are not a game at all. They are a method to estimate player strength by some third party, not a system of "points" that you "win". I could have my own private system of ratings that I never tell you about, based only on published chess results. I don't think you can be considered to be playing a game if you don't even necessarily know of its existence. When Jeff Sonas computed what ratings would have been for players before 1970, where those players retroactively playing the ratings game? That is absurd. Ratings are not a game.

This answer ignores the question of ratings, instead looking at a setting like a tournament, league, or similar.

Here, a single game of chess is indeed zero sum, under the typical scoring rules (1pt for a win, 0.5 for a draw, 0 for a loss) and assuming that the goal of players is to maximize points earned. That this is "actually 1-sum, not 0-sum" does not go against this assertion: Since the number of games each participant/team gets to play is fixed, one might as well score (+0.5 / 0 / -0.5) without changing the resulting outcomes at all. (That is why typically, the interesting property of a game is really being constant-sum, and not necessarily zero sum. The former are sometimes referred to as "rescaled zero-sum games".) If the goal is not to maximize points earned, but rather e.g. to place as high as possible in a given tournament, it is well possible that a match is not zero sum; say, if both players would need a win to move up a rank, and losing or drawing would not make a difference by that metric.

It is important to point out that the zero-sum nature of a match does not arise from the fact "Either the game is a draw, nobody wins or loses, or one side wins and the other loses." alone. In football ("soccer"), the same is true, but games are often scored 3 for a win, 1 for a tie, 0 for a loss. Thus, a match is not 0-sum (or constant sum): Two teams would e.g. rather trade wins than tie twice. Two possible aims of the three points for a win rule are to incentivize more aggressive, arguably more interesting-to-watch play, and curb potential for collusion.

The main reason why people often claim chess in a zero-sum game is simple: it is!

Considerations about ratings, the joy of playing, the scoring system for a certain type of tournament... are not a intrinsic part of the game of chess. The utility function for chess only considers three values: win > draw > loss. The value for the first player determines the value for the second player. When player 1 sees its utility function maximized, player 2 sees it minimized and vice-versa.

Please note that the distinction between "sum-0" and "sum-1" is irrelevant here since chess strategy would be exactly the same if the scoring system were "0.5, 0, -0.5" rather than "+1, +0.5, 0". In contexts like business this distinction is important because you have the "0-monetary-value choice" of not participating. But once you are in a game of chess, the only way to opt-out is to lose

Chess if therefore a zero-sum game.. Your "chess career" may not, though

I've seen a lot of answers here discussing wins and loses, piece trades, and even ratings. Here is my take on chess being a "zero-sum game":

A different take on the question "Is the FIDE rating system a zero sum game?": one could define a player's scaled ELO rating with the formula

There are two exceptions, because of how the factor k is defined:

These are always positive variations, and when a new players gets a FIDE ELO score it is positive. So technically chess is a positive-sum game: the sum of the scaled ratings of all players in the world (living and dead) is an increasing quantity.

However, the events that make this sum increase are probably not what you imagined. (In particular, there are at most 3 in the life of each player).

The claim that chess is a zero-sum game is clearly nonsense, apart from in the most theoretic way. Just looking at the scoring system gives the game away -

OK, joking aside, what about rating? Surely if we play a game and the game is rated then what one side gains in rating points will be matched by the other side's loss in rating points? Rating-wise it is zero sum.

Putting these purely numerical factors aside it is clear that it is mostly a non-zero sum game. There is a FIDE rule which says that for a game to count as being played for rating purposes each side must have made at least one move. The event which lead to this rule was a weekend tournament in the 1970's when Tony Miles (England's first OTB GM) and Stewart Reuben (later an IA and long time member of FIDE's Rules Commission) agreed a zero-move draw. This guaranteed Miles first prize and gave Reuben a share of second prize. For them it was win-win, at least until the organizers saw what they had done, disqualified them and asked for the money back!

Whenever I play a serious/rated game against a much stronger player it is clear that even if (when!) I lose I don't actually lose anything real and in fact I gain. I gain the experience of having my ideas tested by a much stronger player. If there is time after the game and my opponent agrees to a postmortem then I also gain a free lesson.

Clearly chess is anything but zero sum.

Not the answer you're looking for? Browse other questions tagged psychology evaluation or ask your own question.

20
How to minimise your opponent's fun in a game?
12
Are Elo Ratings Zero-Sum?

13
Is chess a game of skill or chance? To what extent?
4
What does autopilot mean in chess?
1
chess win expectancy by material difference table or calculator
3
Calculation for game phase
2
Chess evaluation function
4
Help with game phase identification
8
Is chess a good game to fight against gambling addiction?
25
Is chess a good game for recovering addicts?
12
What is the physical response to a high level chess game?