If you are familiar with watching chess broadcasts on ChessBomb, you'll know they have an engine running on the server which evaluates moves, and colors each move according to whether (according to SF) it was the correct move, an imprecise move, a mistake, a blunder etc. with colors ranging from bright blue (good) to bright red (bad). When switching to a game, one can then instantly see how well the game was played, and where a blunder/mistake may have occurred.

Does anyone know if a similar feature is available in other chess software or websites where one can upload their own games? And get such color codings for their own games?

I'm only looking for something equivalent or very similar to this; I know some software uses graphs to display the +/- score as a function of the move number, and some software can auto-analyze all moves and annotate it with ? and ?! and such. I'm not looking for that.

Edit: below is an example of what I mean, when viewing a game in the mobile browser. It instantly shows all the moves and highlights which moves were good/bad.

Here's how color-coded analysis looks on the lichess desktop site. 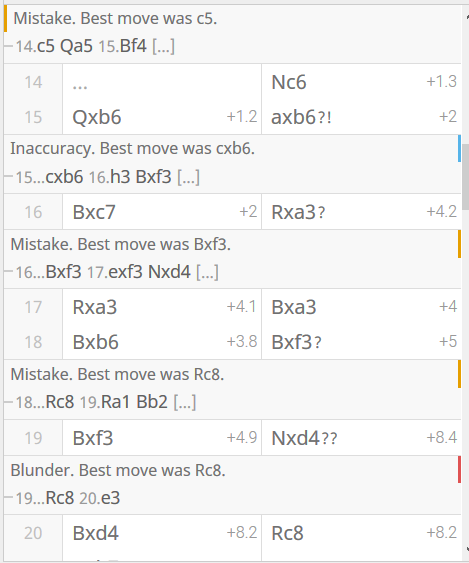 As you can see, depending on the severity of the error (according to Stockfish), different colored bars pop up on the game analysis - blue for an inaccuracy, orange for a mistake, and red for a blunder. A black bar will show if a player loses a forced checkmate sequence or blunders into a forced checkmate sequence. I don't have the app, currently, but I believe that the same thing shows up there, since I used to play exclusively on the app.

You get this color-coded analysis by clicking "request a computer analysis" - it's on the bottom of the screen on PC.

If anyone has the app downloaded at the moment, feel free to screenshot this feature and add it to this answer.

Not the answer you're looking for? Browse other questions tagged engines software evaluation or ask your own question.

16
Software for opening repertoire practice
51
Is there a good online opening training software?
1
Chess software that shows current score
8
Arena: How to have the engine only analyze and let me play as both White and Black
13
Chess software to analyze games
1
Software with support for Database with opening analysis
3
Looking for special chess freeware
0
What are some free chess software for showing the best moves in the final output analysis?
1
Alternative to ChessBase Replay training feature