im posting this from my blog: http://chessratios.altervista.org/

Surprisingly engines like Stockfish and Houdini (the top 2!), Are not very close in this table ordered by Captures.

Carlsen is 1 point under the other humans. 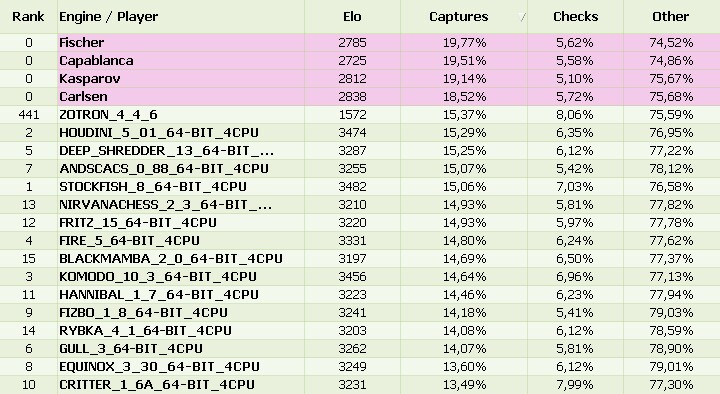 What do you think about this?

The Following data analysis of chess games where made by me, the Engines games where extracted from de CCRL page in the category of “40 moves in 4 minutes” , also known as “404”.

The analysis was made game by game, and move by move… so the information, I think, is very precise.

All the analyzes and indicators presented here do not mean that one engine or person is better than another, they are only characteristics of their personality.

Captures: This are amount of captures that the engine or player made in proportion to the other moves.

Checks: This are amount of checks that the engine or player made in proportion to the other moves.

Other: Represents all the other moves that are not Captures or Checks.

Rank: The Rank column is the rank in CCRL of the engine at the moment when the data was downloaded.

All calculations are averaged with the number of games of each engine/player.

I add 4 human players to see the difference against the Engines analysis of these factors. And also added a ‘middle strength’ engine name Zotron (Ranked 441), also for the same cause, to see how these factors behave in different Engines.

I don't think the human-engine comparison is fair, because the engine data is restricted to 40 moves in 4 minutes, whereas the human data is, as far as I know, not restricted in the same way.

Given this limitation, I will address the possible differences between the human-computer data:

I'd be careful drawing conclusions from this data only. Most captures (in %) happen in the opening/mid game, so shorter games will result in a higher percentage in the "captures" column. I would expect this to be the main reason for the data you see in that column (and not Carlsen avoiding capturing pieces). Perhaps you could analyze the average number of moves of the players!?

There can be various reasons for shorter/longer games:

20
How can one improve their over-the-board analysis skills?
7
Chess engines for analysing games
19
Why do chess engines sometimes miss good moves (or take forever to spot)?
20
Free online analysis engine?
23
Does white really have a win in this pawn ending, as claimed by Tim Krabbé?
5
Formulating a Precise Definition of "Space" in Chess
3
Analyzing using Chess Engines - Giuoco Piano/Steinitz Variation
4
Is there an analysis of World Champions' games that shows the statistics of their game?
6
What is the difference between a brilliant move and the best move?
4
Queen versus rook endgame: to check or not to check?