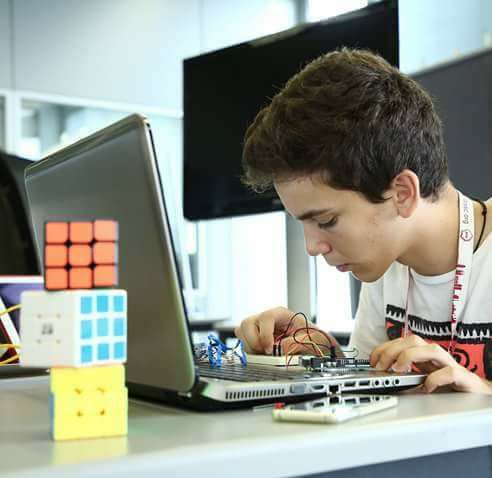 When I was in highschool, I used to make movies as a hobby. I would write screenplays, call some friends, start recording, and edit everything. What I realized is that as much as I loved movies, I liked creating something new, something from scratch and on my own. That is the reason why I started programming.

After learning some Javascript online, I decided to sign up for the local robotics team in 2015, where I started introducing myself in Arduino and also acquired important values such as leadership and teamwork since I ended up being the team captain.

In 2016 I participate in an IT campus in Madrid at Carlos III University and ended up with a high performance diploma in Cyber Security.

In 2017 I was selected to participate in a research project at La Salle University where we had to program smart cars, which was a great opportunity for me to continue developing my Arduino skills.

When I turned 18, in 2018, I decided to go abroad to pursue a career in programming so I moved from Spain to The Netherlands to study Computer Science at the TU Delft, one of the best universities in Europe.

Since that moment, so many things have happened, I gave a TED talk, I won pitching competitions, went to conferences, courses, learned many more programming languages and cool stuff during my studies…

We respect a laser-like focus on one topic.

0 Is there any software that will analyse games offline? Jan 2 '19