Are there statistics on the frequency of tactical motifs?

I'm going to suppose that compiling this sort of data would be nearly impossible because the question is, while it seems very specific, is actually far too broad. As a database developer I face these kinds of scenarios very often. One of my special favorites is just the idea of a date and time. It seems so simple but the second you start to really look at it you see it is in fact very deep and has many facets.

You see where I am going with this. There are so many things that need to be considered before the data can actually be transformed into something informative that it becomes impractical. This should not really be surprising for a topic that chess players through the centuries have had a difficult time defining: what is a tactic? What is a combination? Is a combination just a set of forcing moves even if it leaves the position exactly equal? What if it leaves the player who initiated it weaker? It's like the US supreme court justice said. We might not be able to define it, but we "know it when we see it." But that sort of definition doesn't help us transform a mass of data into actual information.

I think Robert Kaucher's answer addresses some of the difficulties in finding an objective answer, but I'll do my best at a subjective answer based on my own game play:

In slow tournament games, pins and forks are far and away the most common tactical motifs. Skewers are a distant third. To be clear, I am lumping double attacks in with forks (i.e. threaten mate and a loose piece with one move to win a piece).

In my games, forks don't usually appear on the board because my opponents don't usually miss a one move knight fork, for example. The threat of forks often dictates moves though, and one side or the other will use these threats to make some positional improvement. Double attacks are slightly different. In one of my slow games this month I was able to win the exchange from this position: 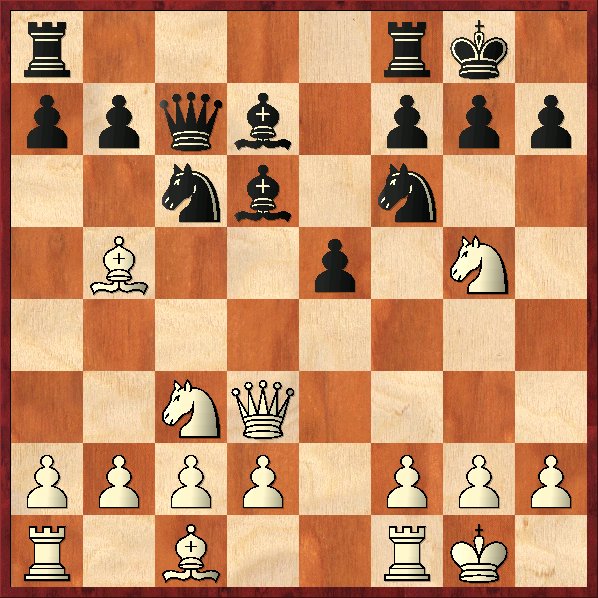 I find that double attacks are usually only threats as well, but since they are usually more complicated to "see" over the board, the actual tactic happens in the game more frequently.

Pins, however, are fairly common. Players are much more likely to allow a pin (at least temporarily) because there is usually not an immediate loss of material.

As a final note, in games between lower rated players and in online blitz games (usually lower quality than slow chess games), forks and pins are still the most common, but they are executed on the board more frequently as opposed to just being threatened. I think this is because one player simply misses the threat and allows it to happen.

Not the answer you're looking for? Browse other questions tagged statistics tactics or ask your own question.

5
Statistics on how a rating or winning percentage corresponds to the (opening, middle, end) game?
20
In Chess, are there simple "mechanics" that amateurs can learn to improve their game?
4
What are some good tactical opening moves?
5
What are some common statistical analyses we can run on many games (~20k games)?
8
In an opening tree on ChessBase, how can we fix the statistics so that transpositions are not taken into account in the total number of games?
3
Most drawish and least drawish opening
4
Is there an analysis of World Champions' games that shows the statistics of their game?
8
Is there any website that shows which opening a certain player struggles against?
2
What are the objective criteria which suggest the position needs immediate tactical attention?