How to propose a new game variant?

My daughter and I have devised a chess variant which we feel works very well: it preserves the basic moves and strategies of chess, yet adds new strategies and considerations. It is a form of "3-D chess", yet not gimicky as the current forms are, possibly because this variant did not start off with the intention to do another "3-D" idea. In fact, the 'stacking' of boards is a late addition to the game and not necessary for the rules to hold. It does help spatially-oriented human minds to relate to the game, though!

In our variant, a transparent (glass) chess board is suspended about 30 cm above another board. Standard gameplay occurs on the top board, with the bottom board initially empty. Whenever a piece is captured on the top board, it is moved to the same position on the bottom board. When the capturing piece later moves off the square, the piece below it (if still there) returns 'up' to the top board. Thus, pieces are 'buried' instead of 'captured'.

The twist is that a player can take his turn on the bottom board instead of the top board only if that move results in a capture. This is a traditional capture: the piece never returns to gameplay. Additionally, the rule that all bottom-board pieces have associated pieces above them is preserved.

The fact that each position (square) can have only a single buried piece makes gameplay very interesting. It becomes strategy to not defend pieces as taking an opponent's piece which just took your own piece will mean that your piece is forever captured. Other interesting strategy aspects emerge, such as 'wormholing' through the bottom board or tricking your opponent into capturing pieces that you prefer to have on the bottom board. Gameplay is much longer, but mistakes are more forgiving. To make it easier to find relative positions on the top and bottom board, the following squares have a small dot in the center of the square: 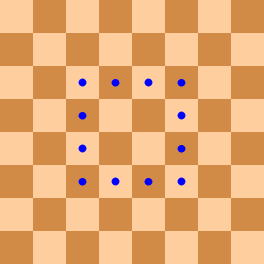 How might we present this variant for others to consider and enjoy?

The canonical site for publishing a new chess variant is https://www.chessvariants.com. Read some of the descriptions there to get a feeling of the format of presentation, register (it's free) and submit your chess variant. They have an intuitive form that helps you in the write-up.

5
Phone apps for playing chess variants
8
What is this battleship-style chess variant called?
3
Fairy endgame statistics for KDDDDvKN (D=dabbaba; '2,0' leaper)?
28
Is there a name for a chess variant where you are allowed to capture your own pieces?
9
Variant in which two pieces can occupy a single square
12
How much material is needed to force the capture of a lone queen (for example in horde chess)?
1
New Chess Variant
5
Is there a forced win in CastleChess?