Why was this game drawn?

So, I was having this game with my opponent (and losing), but anyways, here is the final position: 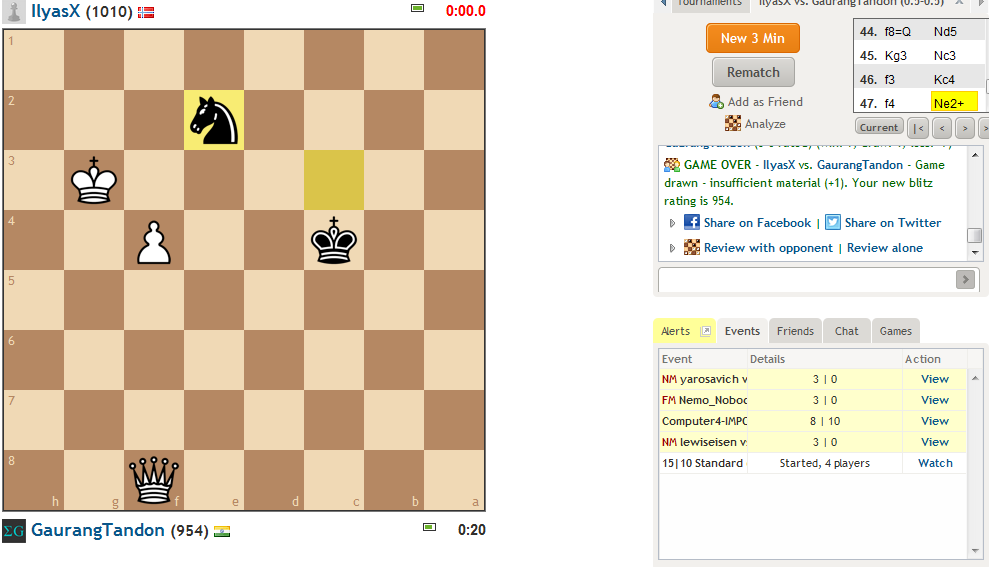 I checked the king with my knight on move 47 (i playing black). All of a sudden, the game was drawn by insufficient material rule. However, there was indeed a queen with my opponent there on the board. So, what exactly happened here?

Also take note that my opponent had no time on the clock, so practically, I should have won the game.

Chess.com, along with FIDE, awards the full point to your opponent if you run out of time, unless your opponent has insufficient material: not enough resources to feasibly carry out a win. This effectually concedes victory to both players, which is sensible since on the one hand, your opponent rendered you incapable, but on the other, you held him off until he had no time to finish you off.

Whereas FIDE calculates all possible futures; if one legal series of moves results in checkmate against the player whose flag fell, flag-fall is a loss for that player:

6.9
Except where one of Articles 5.1.a, 5.1.b, 5.2.a, 5.2.b, 5.2.c applies, if a player does not complete the prescribed number of moves in the allotted time, the game is lost by that player. However, the game is drawn if the position is such that the opponent cannot checkmate the player’s king by any possible series of legal moves.

Just for kicks, let's see one of these legal series of moves wherein you checkmate your opponent.

That's why FIDE would count flag-fall to be a win for you. Chess.com does not. To be fair, that or any line resulting in victory for you is so far-fetched that in this case, it's hard to complain that you could feasibly have won.*

Sources: FIDE Laws of Chess, Article 6.9; Chess.com forums - list of threads with "insufficient" in the title.

*There are a couple positions, however, in which King and Knight can force a checkmate vs. King and Pawn. For example, there would be ample cause of complaint if Black purposely runs out of time in the following position:

As your opponent overstepped the time limit, it is you who has to have sufficient material to mate him, to claim a win. His material is irrelevant, but your knight isn't enough.

Unfortunately for you this decision might be dependent on the chess server you are using. With queen and c-pawn there clearly still is a "series of legal moves that leads to checkmate", so I'm not sure this would be a draw under Fide rules.

You're right, with the flag fallen, the game should have been awarded to you, because it is possible to create a mate starting at the given position (e.g. if the pawn is promoted to a bishop). Seems like this particular online chess doesn't implement the rules correctly.

If your opponent runs out of time but you have no possible way to checkmate, the game is declared drawn (by FIDE rules). The rationale is that you couldn't have won the game no matter what, so you don't get a full point.

In your game you technically could have won with only a knight if your opponent played very badly. So according to FIDE rules the server should have awarded you a win. However, the server doesn't have to abide by FIDE rules (personally I think the no mating material rule is fairer in this instance).

Not the answer you're looking for? Browse other questions tagged draw online-chess or ask your own question.

17
The history of the 175-move draw rule
1
When is the right time to offer a draw according to the FIDE OTB rules
10
Why do some players never accept a draw offer?
4
Why was this game drawn on Lichess?
6
What are the downsides of fast tie-breaks after drawn games?
2
Lockheed draw rules
9
Chess.com insufficient material draw
14
Is it bad etiquette to try to make an opponent lose on time when a position is clearly drawn?
3
Tablebases say this position is drawn, but Stockfish disagrees-What does that mean?