It's not check but the next move is checkmate [duplicate]

Ask Question
Asked 6 years, 9 months ago
Active 1 year, 11 months ago
Viewed 4k times
2
This question already has answers here:
Is it technically a checkmate if the king is not in check, but all moves will result in check? (4 answers)
Closed 1 year ago.

I have 5 pieces left and my opponent only has his king. It is my opponent's turn and his king is not in check but everywhere his king moves is checkmate. Who wins?

checkmate check stalemate
Share
Improve this question
edited May 4 '15 at 0:07

If it is your opponent's turn to move and none of your opponent's pieces can move other than his king, and the king would be in check on any square it could move to, we would call that stalemate. In case of stalemate, neither player wins – the game is drawn.

Here are a few examples: 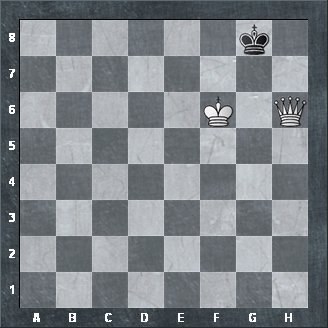 Black has 2 pawns and his king. His pawns can’t move forward or capture any pieces and his King can’t move anywhere as its surrounding is controlled by the pieces as shown in the image.

Positions like this one occur only very rarely! I believe it is a composition by someone and hasn't occurred in a real game. Here all the pieces are on the board and yet White has no moves to make. All his pawns are fixed, most of his other pieces are blocked by his own pieces and the only 3 pieces which have space to move are the rook on g3, the knight on d2 and the king on e1. None of these three pieces can move since that would leave the king in check! Unfortunately this is a draw, because it is a stalemate.

Excellent explanation of stalemate by Pavan, but I think there was still some confusion in the original post about checkmate too. Here is the logical way I try to think about it.

A king attacked by an enemy piece is called "in check".

It's illegal to play a move so that your king is in check (either by moving king into check, or by shifting a pinned piece out of the line).

If you have no legal moves, for whatever reason, then the game is certainly OVER. But how?

Not the answer you're looking for? Browse other questions tagged checkmate check stalemate or ask your own question.

13
Is it technically a checkmate if the king is not in check, but all moves will result in check?
7
Only the king remains, but he is stuck, can't move

13
Is it technically a checkmate if the king is not in check, but all moves will result in check?
4
Four way chess -checkmate
2
Check and checkmate on following moves
0
Is the game done if your only movement is getting out of check?