I have two questions.

1) Is there a position with all pieces on board such that the side to move loses?

2) Is there a position with all pieces on board such that the side to move is checkmated in 1?

Regarding question two, here is one example position that I’ve made where the side to move is checkmated immediately, but the knights are still missing.

Maybe, someone can improve this.

checkmate problems zugzwang
Share
Improve this question
edited May 30 '20 at 19:14

If you literally mean all pieces, the simple answer would be no, there are simply too many free pieces to move that you cannot enforce a real zugzwang scenario there.

Note that, if all pieces are still in board, it means there hasn't been any promotion yet either. Without capturing, the pawns cannot change their files, and continuing on the same file they'll toss on the opponent's pawn.

The side to move is checkmated in 1 is legit, but if you add the zugzwang condition that (let's assume the side to move is not under check to make it a legal scenario) without moving that same player would have survived the position, but only because of the necessity to move, they will get checkmated in 1; then we end up in the same disclaimer above: there's simply too many (16!) pieces around to enforce a full zugzwang.

Edit: Actually, if being realistic is not a requirement, you can reach a zugzwang scenario with all pieces on board with the real meaning: if not moving were an option, that would be the best move. With mate in 1, that's pretty much impossible to achieve. Also without being realistic, I don't see the point of setting up a zugzwang position, because the idea of such a position is that things were more or less equal up to now, but the next move will cause damage. Whereas in a scenario like this, the opponent already had many trivial chances to win material advantage. Anyway, for the sake of completeness, I'm posting such a position. Anything that doesn't resemble this will mean that one side has too many free pieces, hence that won't work.

Further edit: proof that it is legal, it just doesn't make any sense. 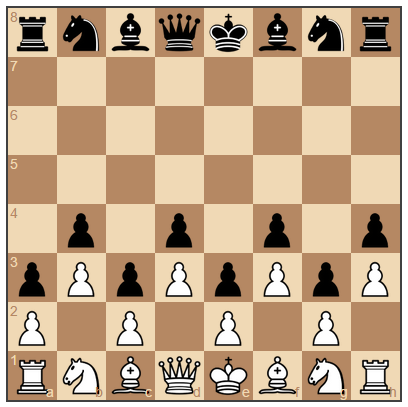 Not the answer you're looking for? Browse other questions tagged checkmate problems zugzwang or ask your own question.

16
What are the origins of the words 'zwischenzug' and 'zugzwang'?
23
What are some chess games that feature Zugzwang despite many pieces remaining on the board?
10
How can I identify Zugzwang opportunities?
14
Symmetric zugzwang positions?
6
Midgame zugzwang?
13
Mutual Stalemate
3
Book recommendation on zugzwang
0
What is zugzwang in chess?
2
Helpful Zugzwang?
1
Most possible movement by the losing side in a zugzwang position