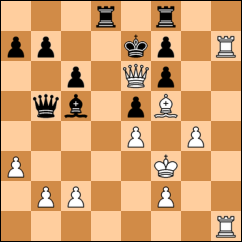 26
Is it ethical to tell your opponent how you are going to checkmate them?
10
Are there any grandmasters who always play until checkmate?
2
Are there decided recent games with 1. b4 at top level?
9
Who are the seconds of famous players?
1
Are there any vegetarian or vegan Masters apart from Anand?
13
What are the laws concerning copyright of chess games?
7
When you are winning, is it ethical to not go for a checkmate right away?
10
Have there been any titled North Korean players?