Is there any method to determine if the weaker side in KQPKQ has a perpetual check?

Is there any possibility to check, without the use of the tablebases, if a position in the endgame queen+pawn vs queen (KQPKQ) allows a perpetual check for the weaker side?

Whether there is a draw in hand depends on both the rank and file of the pawn in the following analysis.

The following as an analysis quoted in Wikipedia's article, queen and pawn versus queen endgame. All quotes and diagrams are taken from Wikipedia. Wikipedia cites table base analysis by the chess computer Belle from 1985, alongside John Nunn, Reuben Fine, Pal Benko and others.

Black king on white dots: win with White to move, draw with Black to move; on black dots – win with either to move; other squares – draw 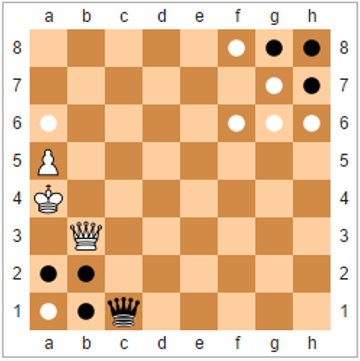 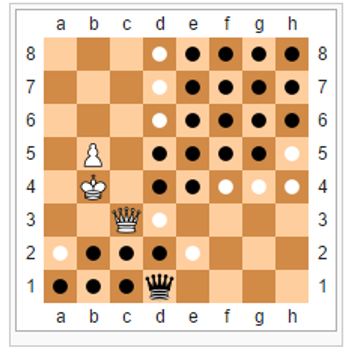 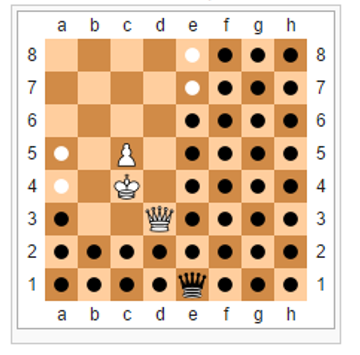 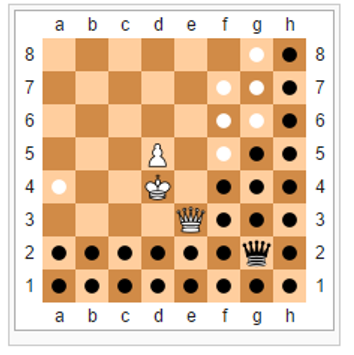 Not the answer you're looking for? Browse other questions tagged learning endgame tablebases queen-endgame or ask your own question.

12
How many legal but unreachable positions exist?
4
Longest DTC in the endgame KQPKQ depending on the place of the white pawn
4
Mutual Zugzwangs & Longest Checkmates (DTM, DTC and DTZ) in the endgame KRPP vs. KRP
3
Normal draw positions in the endgame KQPKQ with a bishop-pawn?
7
Can the bishops and knights triumph over the queen?
5
Which side has the advantage?
8
Amazon vs Chancellor endgame
10
Are there attempts at creating practical endgame tablebases?
10
Does a KQQ vs KQ endgame position with perpetual check exist?