Is this move valid in the rollerball chess variant?

Can the white King move a space to the right, into the original location of the black king? This would be disallowed in standard chess, as one cannot intentionally put themselves into check. However, in rollerball chess, moving the king into this square is supposed to end the game, giving white the win. Thanks in advance! 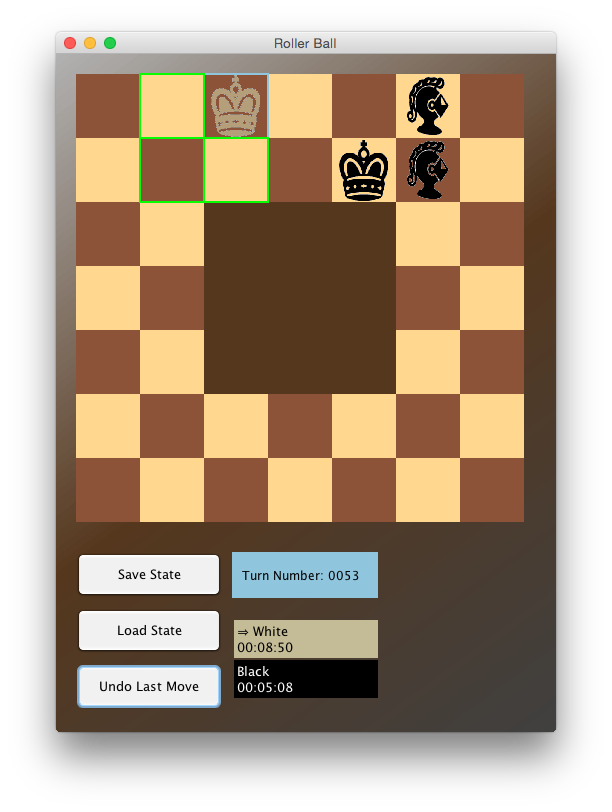 No it is not legal. Just like in normal chess the king cannot move into check, even if it would 'win' the game.

The rules on the official (according to Wikipedia) website on rollerball chess contain this text:

King: moves and captures exactly as in Orthochess to any adjacent square but never to a square where it can be captured. It is the only piece to have a symmetric move.

But the French rules only say:

Interestingly I found another inconsistency between the English and French rules:

End of the Game: There are 2 ways to win the game:

The second case of which differs from the French version:

So in the French version you have to complete an entire circuit with your King and it is not explicitly stated that it be clockwise. An anticlockwise (semi-)circuit is certainly very difficult anyway, since your opponent's pieces are much stronger in that direction than your own, so there does not seem to be a pressing need to forbid it.

In conclusion I find that the French rules, but not the English, leave open the option of winning by moving to the finishing square even when that square is threatened. I do not see any pressing need within the game to decide one way or the other, so best discuss which house-rule you use at the start of the game.

Not the answer you're looking for? Browse other questions tagged chess-variants illegal-move or ask your own question.

9
Could two kings force checkmate against a lone king?
3
Is attempting to capture the king advisable in this position?
7
Would certain checkmates be possible if the king could move into check?
9
Moving into check for a draw as black, why is it illegal? Comparison to Racing Kings
10
Official rules for castling in Chess960? (Is there a loophole?)
10
Variant in which two pieces can occupy a single square
5
Would move sealing make sense in chessboxing? Or do the chessboxing people explain why they don't have?