Is there any chess engine that can show if one side has a forced draw?

Is there any chess engine that has an analysis mode that can show if a position is a forced draw by either side?

Just to give an example of when this might be useful, if white doesn't need to win and just wants to be as sure as possible of getting a draw then they might prefer to play a move with evaluation +0.0 and a known forced draw even though another move with a higher evaluation is available.

Obviously there are positions where it is difficult or impossible to be sure whether a forced draw is available or not. But if the engine announces a forced draw then it must be possible to force a draw. False negatives are acceptable but there should be no false positives.

So in summary, I'd like to know for a specific position if one (or both players) have a forced draw available to them. Calculating the numerical evaluation of the position is not necessary, but if it also provides this at the same time, that's a bonus.

The short answer to your question is no, there is not a chess engine that can reliably show if one side has a forced draw. For example, this locked position is quite clearly a draw to the human eye: 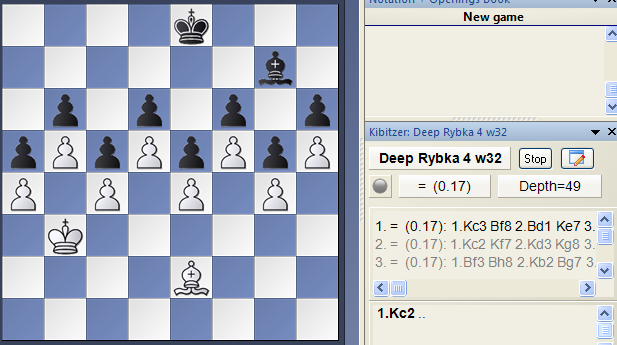 However, notice that the evaluation is 0.17, not 0.00. Houdini also give 0.05 - ever so slightly good for white. This is very important. This suggests that the evaluation of 0.00 is reserved by these programs for a specific reason, and indeed it is. Basically, even in an "equal" position, the computer will not ever say that the score is 0.00, instead it will give a minute edge to one or the other side.

So with that background, on to the specifics! First, if the game is just a draw due to the position (i.e. stalemate, insufficient material, etc.) most GUI's will pop up a message that says "Game Drawn", or something to that effect. That leaves the more complicated cases that you mentioned in your question. In order to cover most of those, I'll introduce another position. This is taken from Morphy-NN 1-0, New Orleans Blindfold Simul: 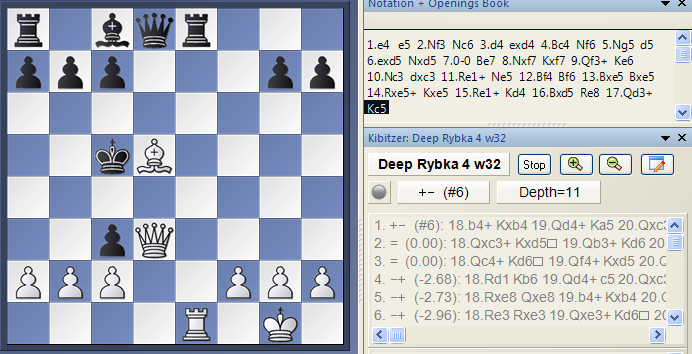 Notice that Morphy currently has mate in 6 starting with 18.b4+!. However, if Morphy somehow missed that this was mate, he still had a forced draw by repetition, which the computer quickly sees. By increasing the number of variations that the computer displays, it is possible to see that after white plays a move like 18.Qxc3+?, white can still force a draw, despite being down a rook and a piece. The evaluation of 0.00 again tips us off that this is a special position in that the computer can calculate a perpetual check. If the moves 18.Qxc3+? Kxd5 are made on the board, then the evaluation will be 0.00, indicating that white's best continuation is to force a draw. Failure to do this will lead to loss of the game with best play.

So to summarize, no existing engine can say with exact certainty that a position is a draw. However, the evaluation of 0.00 is special, and if that shows up as either the main score, or the score for a variation, that means that a draw is probably being forced in that specific line. The easiest way to check is playfully called "spacebar analysis" - when the user hits the spacebar over and over again to force the computer to play the top recommended move. Eventually you will get to a position that is obvious to a human as well as the machine.

And finally, to address your point about "contempt"

This is quite simply referred to as contempt among chess programmers. Most engines will allow you to set the level of contempt in the settings. A positive contempt setting (100 is usually a reasonable level for analysis) will tell the engine to try fairly hard (a pawn's worth) to avoid a draw. A negative setting will cause the engine to seek a forced draw (i.e. insufficient material, stalemate, or perpetual).

Just as engines can, at certain points, see a forced mate some number of moves away, because there are forcing enough lines that the engine can see everything perfectly in the remaining depth until mate, there are also junctures in chess games that would allow an engine to see a forced draw for the same reason of being able to completely survey the limited possibilities in play.

Moreover, it would be easy to tweak an engine's evaluation function in order to make it seek out and prefer moves that lead to such forced draws: just as achieving mate is typically given some enormous value that dwarfs all other numerical factors that the engine's evaluation algorithm considers in order to guide the engine's play toward the ultimate objective, one could instead give such an enormous numerical value to achieving one of the sorts of draws I have in mind.

For instance, automatically evaluate any position in which the opponent has insufficient material to mate as +1000000. Then, if the engine ever finds itself with the option of forcing off that much material of the opponent's, it will let you know. Also, tweak the evaluation algorithm to evaluate any three-fold repetition as +1000000 instead of the usual 0. Then, if there is a forcible repetition (as in a perpetual check scenario), the engine will love it and let you know about it. Similarly, give +1000000 if one can forcibly reach a tablebase draw.

You could also ensure that the engine will give these valuations only when there is complete certainty that the draws really are forcible (because the tree between here and there has been able to be fully checked), just as with an engine not announcing mate unless it is sure. Thus, you won't get any false positives, though there will of course be plenty of false negatives, which you sensibly/necessarily allow in your question.

Not the answer you're looking for? Browse other questions tagged analysis engines draw or ask your own question.

15
Is this endgame position a theoretical win or draw?
9
Chess Tempo #97369 - Theoretical win or draw?
14
Chess Tempo #97369 - Is the problem's solution wrong?
13
Sharp pawn endgame - can it be calculated to the end? With Computer engine?
3
Are there any engines that present evaluations based on probability of finding moves?
3
Tablebases say this position is drawn, but Stockfish disagrees-What does that mean?
7
Why do chess engines cause immediate draws rather than giving the opponent the opportunity to blunder or run out of time?
1
Why not immediately force a draw when losing is possible but winning isn't?
2
is The following position a win or a draw?