Illegal move or forfeit on time - who wins this 5-minute match?

In a 5-minute match a player makes an illegal move leaving his king in a check position. This usually gives the victory to the opponent, if he sees it and captures the king. Otherwise, if the opponent doesn't claim the illegal move within 2 moves, the game just continues as if nothing happened.

If the illegal move automatically loses, that raises the following theoretical question: What if nobody immediately sees the illegal move, and the game is considered to be lost on time. But after a while the opponent notices the illegal move and claims it. Is there a time limit to that, and how is it enforced after the clocks have stopped ticking?

And lastly, would the decision be any different, if the match was longer/shorter?

As far as the time/check priorities go... As far as I'm aware(and in any tournament I have played in thus far) any player that is first to claim for a win will win the game, UNLESS both flags have fallen in which case it becomes a draw. It is part of the game(especially in blitz) for a player to be aware of the clock and there is no default loss when a player's time hits 0 unlike online chess where this is done automatically.

Since someone wanted a conclusive pointer to a rule that enforces this... which took a while it is found in the fide rulebook which can be found at http://www.fide.com/component/handbook/?id=124&view=article There is also a short section regarding blitz(which is less than 15 minutes) which seems to handle the same format. 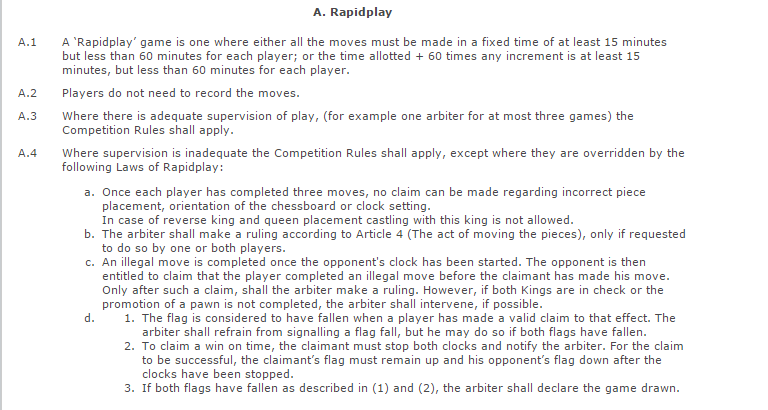 Not the answer you're looking for? Browse other questions tagged illegal-move or ask your own question.

38
I made an illegal move. What happens?
34
Is taking the opponent's king an illegal move?
5
Can you claim an illegal move in Blitz after pressing your clock (but without making a move)?
8
Illegal Move Missed-Too Late?
6
Can a win be claimed on the second illegal move if the first wasn't raised?
1
How is this move illegal?
4
Is this an illegal chess move?
5
Ignoring Touch Move results in an Illegal Move?