I am looking for a tree of sorts, like the one of Chessmaster XI, but with deeper analysis, like why is this move good.

For example, e4 gets the center, with the idea of opening the bishop. e5 comss.with the same idea, and go as far as 30 moves in theoretical lines such as the Najdorf with ideas behind them.

So a compilation of opening theory in digital format, of everything, including new developements.

For MCO, I am looking for a digital software that can fully explore it, like a ChessBase Tree.

Did you ever find a tree like this? I have a Chessmaster file that I have created that documents every move of every named opening line recognized by the program. Yes, it took me ten years and spanned 4 computers and probably 5 versions of ChessMaster to complete...and yes, I do account for transitions...its very awkward to use sometimes when stepping through successive transistions because its sort of a manual process. Here are some screen shots...oh, and at the end of every opening line, I analyzed the final position, scored it, and walked the score back to the previous branch...I did this for every position where there are several candidate moves, all the way back to the starting position of the game...the first screenshot shows that result. The second screen shot shows a position a few moves in (Note the references to possible transitions). The third screen shot shows one of hundreds of thousand of ending positions I had chessmaster analyse 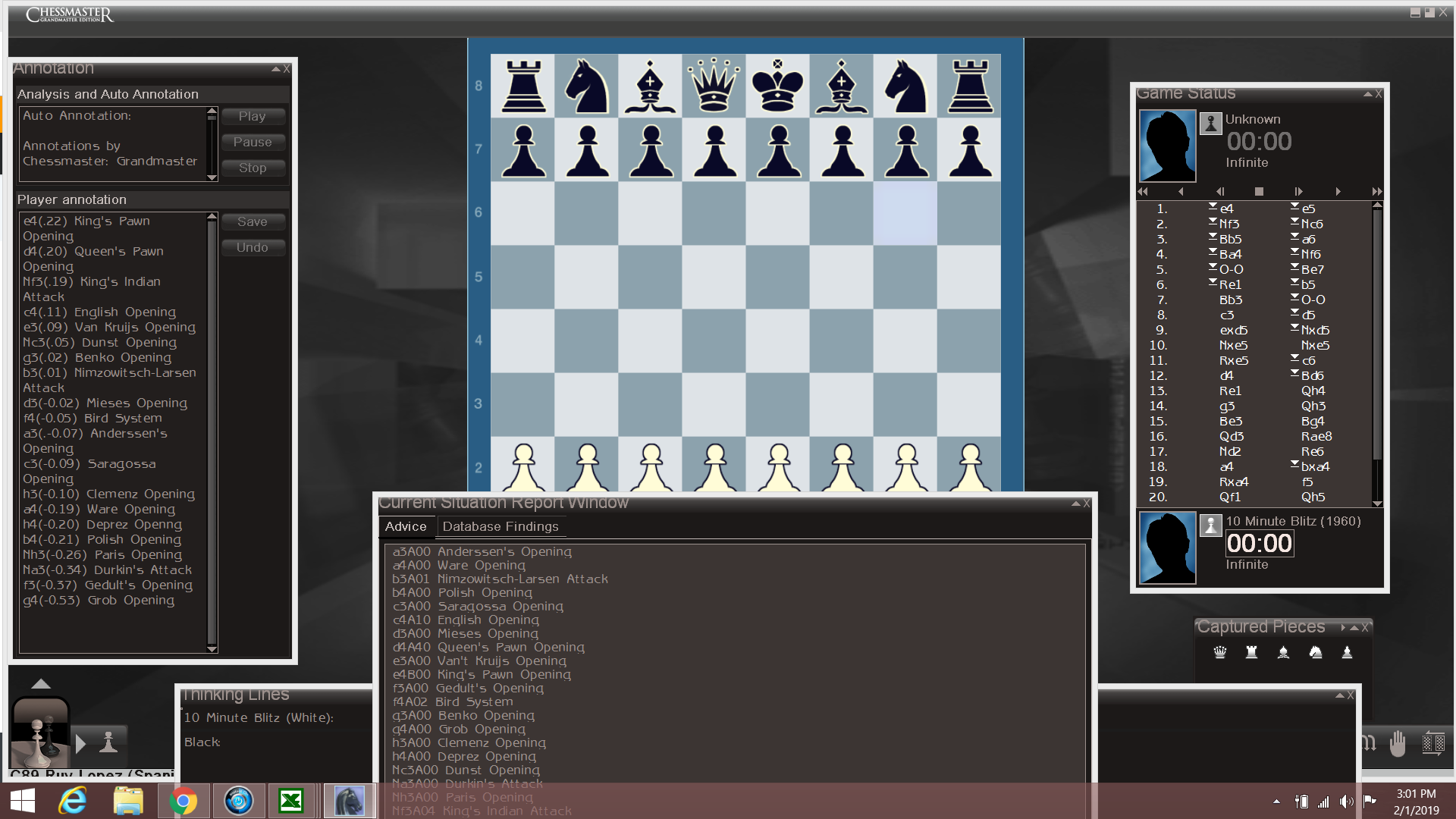 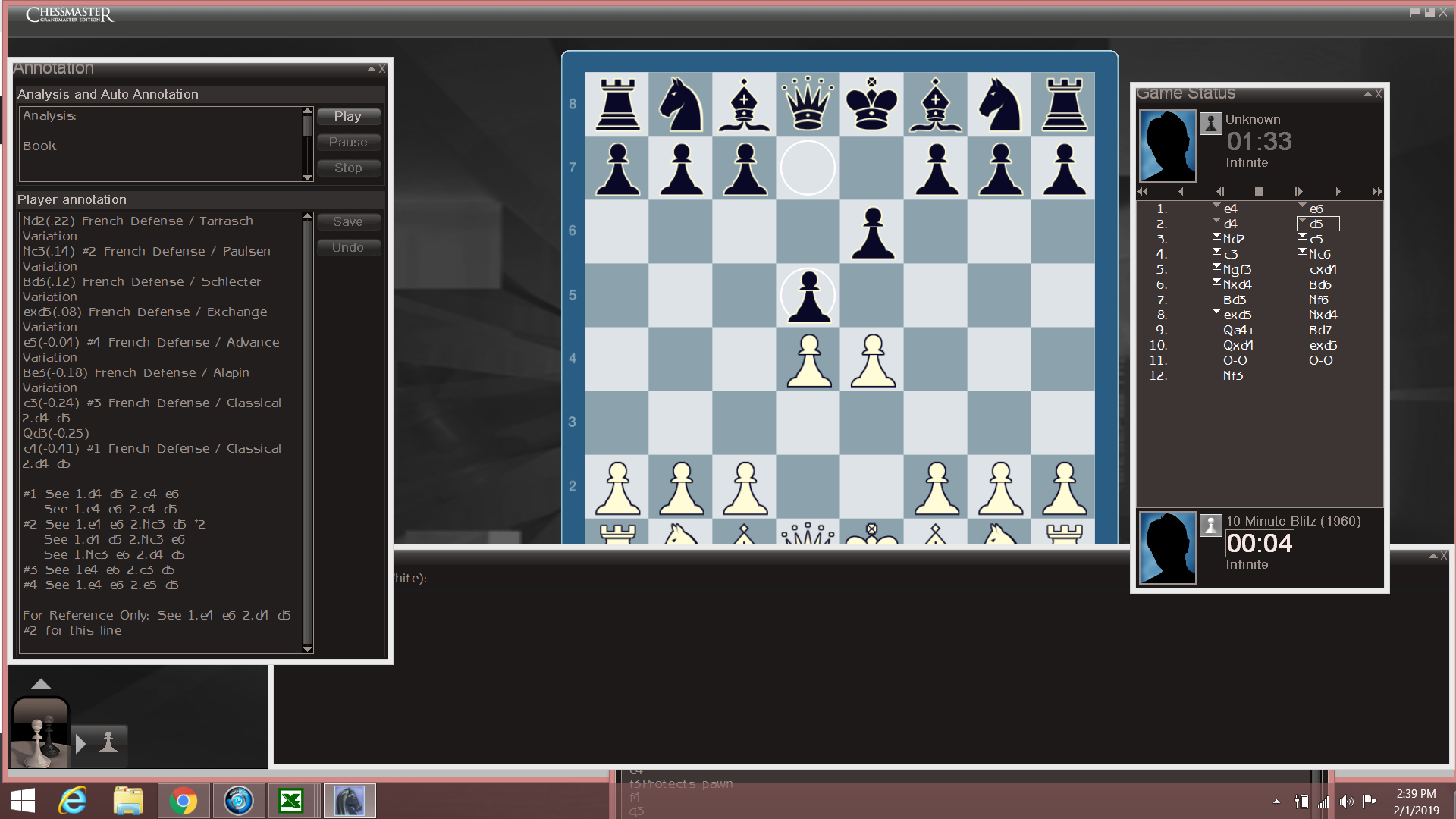 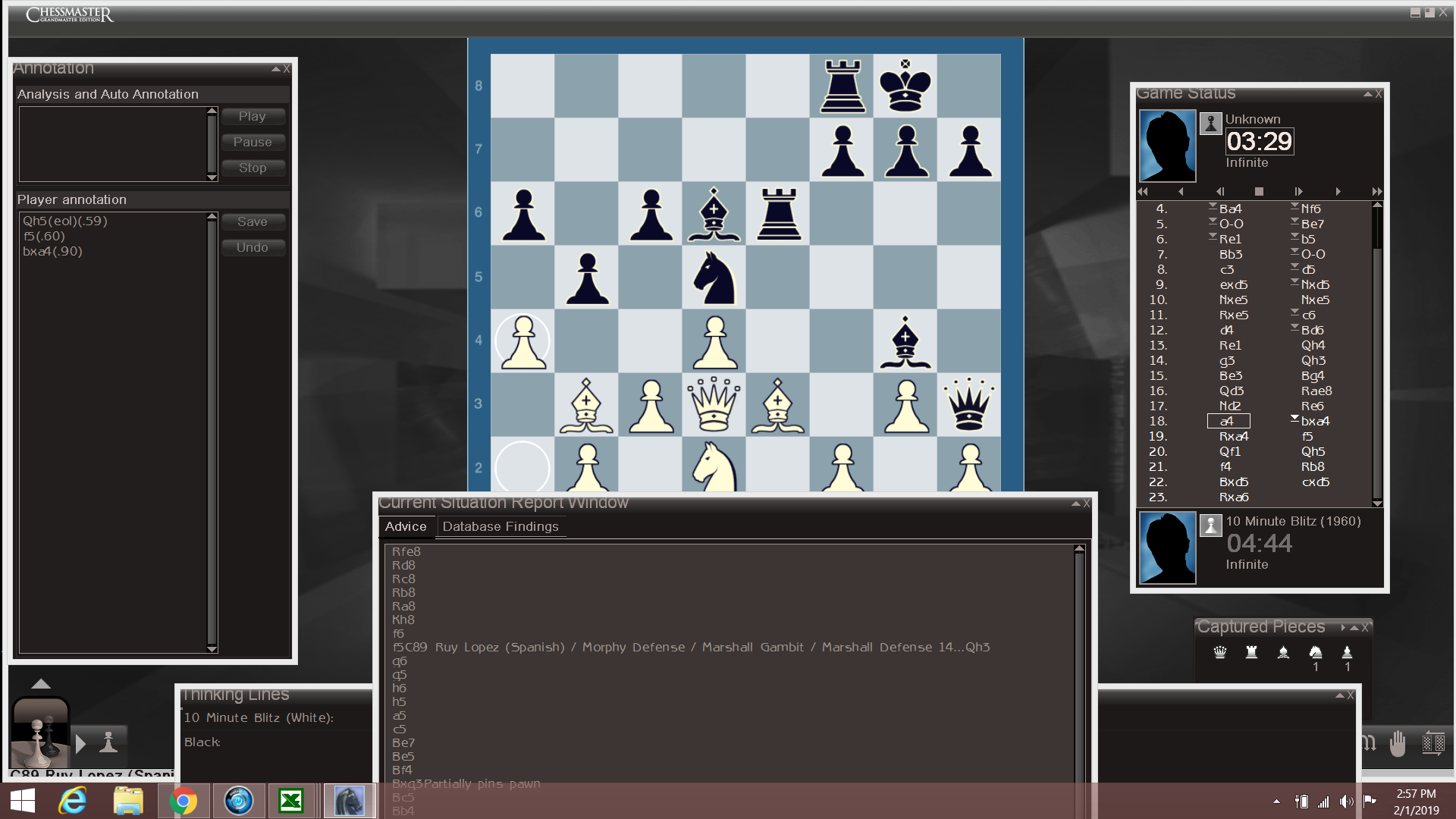 The .CMG file is 30 megabytes and I continue to expand it by adding in all the non-book moves I've encounted and explored as well...Sadly, I believe the file is actually reaching the limits set by the program and lately I've been losing work because the latest file I save frequently becomes corrupted and unusable (I back it up every few edits however, then back up the backup every few days). But still there have been times where I have lost weeks of analysis and added chesslines.

Therefore, I'm looking for a new platform to migrate all this work to and to continue this project on a modern platform. the .CMG format is probably 30+ years old now! Definitely could be improved!

The tree you describe here is the dream of every chess player. Unfortunately, there are only such trees (with moves explained, if the moves are not explained what you are asking for is the Opening Encyclopedia) on very concrete openings and with very little depth, and they almost never contain annotations explaining the moves, as they are used only for reference. The reason of the little depth is that opening theory is evolving at every top game, as discussed on this question. Thus, making such compilation including new developments is something that I can assure you, it does not exist.

What you can do is have a look at the book series "Move by move" by Everyman. You can find some of the books here, with a little description and what the aim of the series is. These series do present a compilation of certain lines (not all, as this would occupy several Chess Informant monographs) with every move explained. This is not the usual approach to opening theory, and one of the reasons that these series are popular.

Despite not being an opening book, the title "Logical chess: move by move" by Irving Chernev features the exact same comments that you made about the two opening moves. Here he covers several (full) games, from opening to endgame, and every single move has annotations of the same style that you ask for. It is a classic and an outstanding book, both for amateur and to club player.

Not the answer you're looking for? Browse other questions tagged opening software theory or ask your own question.

6
What is the best way to maintain an opening repertoire in electronic form?
52
Is there a good online opening training software?
5
An offline alternative to lichess.org's online analysis engine
1
software for a survey of chess openings
4
Offline move trainer software
1
Software with support for Database with opening analysis
3
A script that can create a chess tree from an EPD file