Chess960 vs. Chess480 castling moves? Which is better?

In the chess variants Chess960 (aka Fischer Random Chess) and Chess480 the castling moves are radically different.

What are other reasons to favor one castling system over the other?

I believe the premise of the question is rather unclear! If you're already saying that there are a set of FIDE rules for castling, then the comparison between other types of chess should be straightforward, wouldn't you say? Either they follow the rules or they don't, whereas you seem to be asking for a crude-subjective-qualitative comparison here (you use words like "which is better" or "favored"...), which is kinda impossible because castling in standard chess has well defined rules.

First off, unlike the well-known chess960 mode, chess480 still lacks a coherent definition as many different types of it exists apparently(one where queen has to be restricted to appear on the left of the king, other where the king has to be on dark squares etc.) so as long as there's not a coherent and consistent description of the game, it remains very difficult to do any comparison (unless e.g. you ask for a specific scenario). 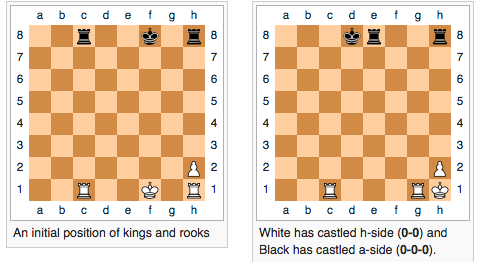 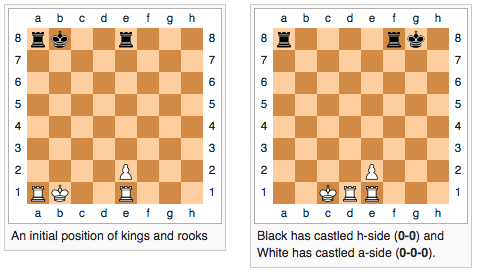 So as far as traditional castling rules are concerned, they are both equally undermining, as for one thing in either mode, the kings can be found on squares other than e-square in the initial setup and still be castled...

Maybe you could further clarify, as to what exactly you intend to achieve with such comparison. (and if you do, then I will edit my reply accordingly.)

I believe the question is quite subjective, but nonetheless, I think that both castling rules were designed to favor "classical" chess players.

As a FIDE chess player, I feel it is way more comfortable to know where my rook and king are going to be when they castle (that is, I will know where will I have to defend) that not, so I think Chess960 castling rules suit FIDE chess players best. An important argument for those novice to chess not being comfortable with this variation is that the final position of king and rook may look completely arbitrary, and understandably not appealing. More on this subject can be found on this article.

I believe, perhaps naively, that Chess960 will become more popular over time and eventually become the successor to classic chess. Perhaps not in our lifetimes.

When the game of chess evolved, and players began moving pawns two squares instead of one, it changed the texture of the game... or it would have, had it not been for the en passant rule.

The same is true of Chess960's castling rules. It preserves the inherent texture of the game.

If you look at a middlegame of Chess960, it is usually indistinguishable from a position that might have come from classic chess.

This is one of the genius parts of Fischer's invention... it does not change the game. It merely removes one of the most onerous aspects of the game (rote memorization). The essence is the same.

Not the answer you're looking for? Browse other questions tagged castling chess960 or ask your own question.