Is algebraic notation used just to communicate chess moves in written and spoken form, or should players strive to use it during their thinking process as well?

In Dan Heisman's excellent The Improving Chess Thinker, which examines the thought process of chess players as originally studied by Adriaan de Groot, Dan asks chess players to verbalise their thought process using algebraic notation. He includes several transcripts from beginners through to masters, including that of Max Euwe translated from descriptive notation, which looks like this:

[A short extract from Max Euwe's analysis of the “de Groot A” position]: 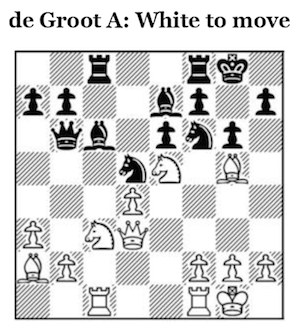 Do Grandmasters assess candidate moves by thinking “I take there, they take back with the knight” or “Nxd5 Nxd5”? Is the notation that appears in the transcripts a direct reflection of the actual thought process, or merely a vocalisation of what they're thinking in order to communicate their ideas to the researcher or coach?

Or, put another way, is it beneficial for chess players to think in algebraic notation (because it's quicker to think in “the language of chess”, perhaps?), or is it purely an aid for communication?

I wrote to Dan Heisman to get his take on the question. Here's his reply:

“Everyone is a little different. The book is algebraic so others can read and understand it. In practice some just think in pictures; no verbalization is accompanying. Others might think more "If I go there..." Sometimes algebraic is helpful to clarify in your own mind what you really mean.”

When it comes to actual thinking I can only speak for myself. I think in descriptive notation. But there was no algebraic notation when I first played in tournaments. Algebraic was done to better communicate moves without error to more players in all languages.

In descriptive notation errors were frequent because people are careless and do not realize that EG a bishop can make the obvious capture but also legally capture something else.

Also in descriptive notation, there are many abbrevs for the pieces in the various languages. Algebraic avoids having to know the language the game was written in.

These days more people probably think in algebraic because that is what they were taught when they learned the game. For me I can think in it for a few moves to discuss a position but for a whole game EG like when I played blindfold against others , it would not be possible.

And I suspect that those on the black side have a harder time doing what is symmetric for those of us using descriptive notation.

Not the answer you're looking for? Browse other questions tagged analysis psychology grandmaster or ask your own question.

0
Are there studies showing that descriptive notation is easier to use for blindfold than algebraic notation?

// TODO sg: TMP solution until we are confident in our current implementation of async imports // once we are, we can move the if into the js entry file and dynamically load the mark obsolete module