How can I tell when to sacrifice?

What are factors to consider when and when not to sacrifice? For example, imagine in a game where your opponent puts his bishop in direct sight of yours and you're not sure whether to take it or not? Is it safe to assume that one of the factors would be if your bishop is bad, then it might be a good idea to sacrifice it especially if the opponent has a good bishop?

What you describe would not be a sacrifice; it would be an exchange - bishop for bishop. And yes, if your bishop is bad (or generally unlikely to enter play without some time-consuming work), then it is a good idea to exchange, especially if your opponent's bishop is well-situated. 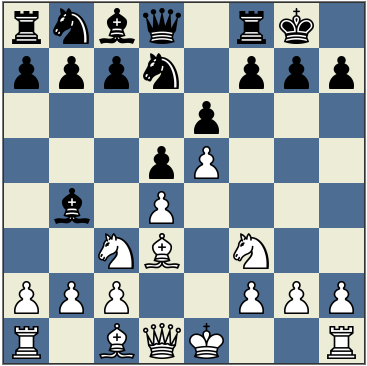 Now White plays the sacrifice: 7.Bxh7+! After taking the Bishop (7... Kxh7) Black is two points ahead, but severely exposed. White takes advantage of this by 8.Ng5+, threatening 8...Kh8 9.Qh5+ Kg8 10.Qh7#, which Black cannot avoid without losing his queen.

For another quick read on the topic of sacrificing, I would suggest The Art of the Sacrifice, written by an amateur only a couple months ago. It goes through the main points of sacrifices, along with profuse examples. Also, the ubiquitous Wikipedia is not to be missed.

Naturally, though, good chess reading costs money, so if you want some good, solid, on-your own instruction, you could consider purchasing some books on the subject.

Sacrifices have the following goals:

Some quick examples from one of my games:

(#1) - 10.Bxh6 might not be the best move from that position, but it is not a bad one either, there is a very dangerous pin by the white bishop that together with the Queen can do amazing things. The main idea is to expose the enemy king.

(#3 and #6) - 11.e5 if the Knight moved, I would have achieved #6 over the bishop, however he didn't and decided to take the pawn, I didn't care which way he take the pawn, my #3 is achieved since all I wanted to free the Queen diagonal.

(#3) - 16.Rfe1 is also interesting, some people would say it is not a direct sacrifice though, but it is deliberately not protecting a piece. The main idea is to don't waste any time and activate the rook ASAP, while still having a chance to protect the other piece if he decides to go for NxN first.

Examples: 1) You (White) have a rook on an open f-file, and your opponent has a knight on f6. You play RxN, Black retakes with his pawn at g7: ...gxf6. Two things have happened. Black has lost a major defensive piece on the kingside, and lost pawn protection on the g file. Even though you have "lost the exchange," what you have gotten is well worth a rook. 2) In another scenario, you might move Nf5 to coax ...gxf5 from the pawn on g6. You recapture, having traded a knight for a valuable pawn that no longer protects the enemy king.

Generally, you sacrifice in an area, usually the kingside, where you have preponderance of force. If you have four pieces to one, or five to two, you sacrifice one for one or two for two, even if your pieces have greater nominal value (sometimes a rook or queen for a minor piece). Then your remaining pieces crush the enemy king.

"Material" is but one of the types of advantages in chess. However, it is the easiest one for most people to understand.

You learn how to spot good sacrifices when you become more aware of the other forms of advantage in chess. Sacrificing is merely taking a hit on the material score in order to gain an advantage in another area.

These words will be easily forgotten without examples. The best examples are classic games. [The games of modern players are not as good because their defensive technique is so good that sacrifices rarely work against them.]

Don't wait for people to teach you in this thread - start learning with a google search or two. Here's one on Great sacrifices in chess.

Go over the many games there and learn from them. See if you can get a sense as to what compensatory advantages are gained for the sacrificed material.

Most of the examples presented in the other answers are about sacrifices related to tactics, i.e. you give up material for a clear purpose; to mate the enemy king or to gain back the material (and more) soon. While these are certainly valid sacrifices they don't happen all that often in high level chess, because everybody is doing their best to not allow them.

Much more common at those levels are positional sacrifices, where you give up material in order to gain a long-term positional advantage or even just to unbalance the position. Most common are pawn and exchange (you give a rook for a bishop or knight) sacrifices.

Typically exchange sacrifices happen in rather closed positions where the rooks are not that powerful and often the captured knight/bishop was a very valuable piece (for defense or attack).

Pawn sacrifices are often done to spoil the opponent's pawn structure or coordination of pieces.

As an example this very nice positional queen sacrifice by Caruana. Look at the position around move 21. Black is completely dominated on the light squares. While it is not clear how black will lose it is a pretty hopeless position.

Measurable gain is not a sacrifice.

There is a percentage of physical and before so don't hesitate, which capacity is been already accumulate for gain....

Not the answer you're looking for? Browse other questions tagged sacrifice or ask your own question.

18
How do you judge a sacrifice?

18
How do you judge a sacrifice?
2
Why sacrifice the rook?
4
Who is better after this queen sacrifice line?
1
Is this rook sacrifice intended?
27
Spectacular queen sacrifice game
10
Counting attackers and defenders, which pieces count?
13
How can I get a collection of chess games with a 'Greek gift' sacrifice?
2
Idea behind sacrifice pawn
7
Is there a set of general rules of material sacrifice?