What factors define changing popularity of different Openings over time?

Recently I found some rather interesting graph displaying how popularity of different openings changed over time. 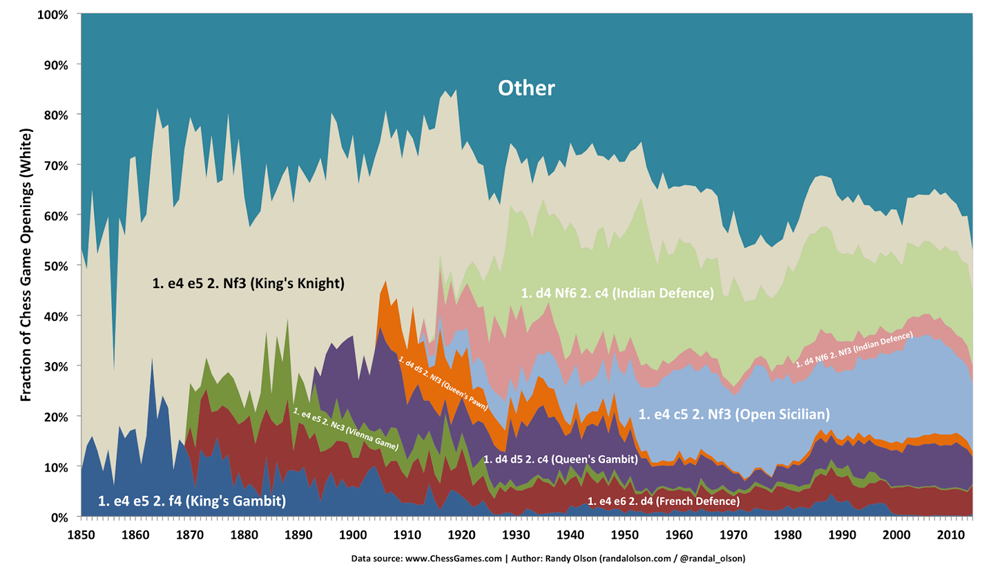 As far as I understand, new researches over classic openings may unveil some hidden treasures or vulnerabilities, but I can't figure out why changes were so drastic. For a comparison, in Physics, different approaches in Theory of Relativity also take place, but sooner or later more and more scientists group around three or so major approaches.

Furthermore, with today's progress in computational methods, strengths and weaknesses of each opening can be formally (not statistically) proven. Instead, what we are seeing here, "Other" openings take kind of 40% and growing on recent years.

So, my question is: Why in Chess there is no obvious trend? In other words, what factors (other than formal) define how each opening changes its popularity over time?

I realize that popularity may be based not only on pure science, but on players' (aesthetic) preferences as well.

Why in Chess there is no obvious trend?

Because in chess there is no theory. The best you can get is the sorted list of moves that are currently considered strongest.

Furthermore, chess allows you to choose and to express your way of thinking/approaching the game. In chess you have a chance to create your own position while nature is already predetermined and we can only try to understand it and adapt to it. Rarely we get the chance to change/reimplement something.

Since we have a choice in chess, of course there will be different trends -> some will like quiet positional play, some will go for sharp bloodshed and some will be somewhere in between.

In other words, what factors (other than formal) define how each opening changes its popularity over time?

Factors are listed in "the first thing that came to my mind" manner, not by their importance :

1. Number of lines player must learn;

Small number will be good for amateurs, since they can actually "have a life" and be able to learn all the intricacies of the opening.

For chess professionals the opening should have lots of branches and lines.

2. Can I obtain counterplay and how sound this opening is ?

Professionals dodge the forced opening lines because they might be refuted with computer analysis or with a strong analysis.

Amateurs love these since they can leave a computer to work 2 days and do all the "dirty work" for them ( and will do it better! ).

Opening must give the player equal chance to win the game, and player must have active counterplay. Days of waiting for opponent to make a mistake or "run out of steam" are gone.

3. How much explored it is?

New lines offer a lot of chances for winning, while explored ones usually end with a draw. This partly explains why some old openings got resurrected.

Opening trends are dictated by leading grandmasters and factors I described above.

With the emerging of strong chess software amateurs got the opportunity to compete with equal chances if he uses opening that is suitable for computer analysis and if he has decent playing strength.

Since popular openings are very well explored thanks to chess engines and enormous amount of games played, there was a danger of all grandmaster games ending in a draw. .

This was also foretold by Capablanca in the 1930s. In those days Black had a variety of good choices against 1.e4 so White turned to 1.d4 since all black had was Queen's gambit. This was an important thing since White had variety of lines to choose which can't be said for Black. Technically speaking, only White could win. Games became dull and technical for Black so after Second World War Black tried to find openings that gave him equal chances to win.

After Indian defenses were invented, Black entirely switched to ...Nf6 leaving 1...d5 as a relic of the past. Since the King's gambit was refuted and Italian game gave White nothing but a draw, people started playing Ruy Lopez.

Then came 1980s and computer revolution. After realizing that computer can calculate every forcing line with 100% precision people started to turn their attention to 1.e4 again, and to other forcing openings for Black hoping that the masters of the old missed something. In those days almost every opening was thoroughly played and many of them got revived. Especially is important Queen's gambit since many players like Kasparov and Karpov liked to have a solid opening that gave them a chance to outplay their opponent after defending successfully. The beauty of the Queen's gambit is that it embodies all the good sides of the 3 factors listed above: it remained sound/reliable for centuries, it is reasonably explored and can give Black equal chances. Indian defenses are prone to being "refuted" temporarily until someone with hard work resurrects them.

As for 1.e4, Ruy Lopez gave White permanent advantage ( although minimal one ) so Black tried to choose opening that gives equal chances but preserves solidity and soundness they had from 1...e5. There came Petroff's defense to the rescue. After a lot of analysis it has been proven it fulfills 2 factors listed above -> it was prone to refutation by a novelty at that time. Meanwhile, people also found that Marshall attack in Ruy Lopez can offer Black equal chances too so again people started playing 1...e5 more frequently. However, positional players disliked the sharped lines that could be refuted by a novelty and searched for solid openings. Then came Karpov and resurrected Caro-Kann. This opening suddenly got a burst in popularity since Karpov proved it satisfies all 3 factors listed above.

With the progress of chess software openings are analyzed very fast with little room for error. This results in professionals facing the "Capablanca prophecy" again, so they will again try to resurrect less known openings or invent new ones. One such example can be Scandinavian defense or Sokolsky attack, even Polish opening or Grob attack...

This is too broad to be explained here but I gave my best to explain it. If you need anything more leave a comment and I will reply.

Nice link, ups for that. Interestingly, I think not much changed during the last 50 years, except for the relatively large increase of the King's Gambit around the 90s and a slight decrease of the Sicilian in the last couple of years.

I believe that the grandmaster matches and especially the World Cup games have a huge impact on the openings. E.g., in the 1920s and 1930s, when the Soviet chess school came up, positional play became more important and you can see it in an increase of the move 1.d4 (in comparison to the more "aggressive" move 1.e4, picture in the link). New strategies were developed and influenced the whole chess community.

And still today, when one thinks of the current world champion, Magnus Carlsen. His influence is of that kind, that the main lines are played not as much as before. I believe that this idea of going into openings will be adopted by weaker players. But this trend can hardly be seen in this kind of charts, since all these games still belong to the mentioned 3-ply openings.