Is there any difference in tactics between chess and Chinese chess? If so, which one is the most fun? What are the important things to learn from it?

Douglas Crockford has written an accurate overview of Chinese Chess (or Xiangqi) from the perspective of a chess player. I quote the following:

Xiangqi can be played on a 9 by 10 uncheckered board. The board is separated into two territories by a river running horizontally through the center of the board. Bishops are unable to cross the river. Pawns gain the ability to move horizontally when they cross the river. Each of the territories has a 3 by 3 area called the Palace. The kings and queens are never permitted to leave the Palace. 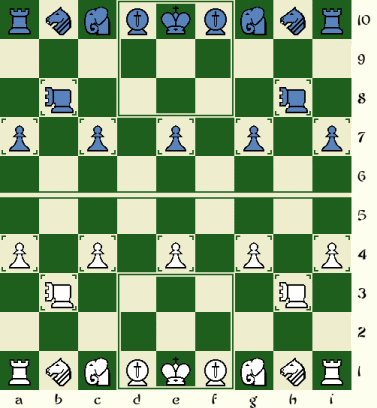 The king (or general) can move one square horizontally or vertically. The king is restricted to the nine squares of the palace. The King cannot leave the Palace, even to avoid checkmate. Kings act as rooks for the purpose of checking: If the two kings are in the same file, there must be at least one blocking piece between them. There is no castling.

The queen (or guard) moves one square diagonally (as in Shatranj). A queen cannot leave the Palace, even to prevent checkmate. Queens are restricted to five of the nine squares in the Palace. Each side has two queens.

The bishop (or elephant or minister) moves exactly two squares diagonally (as in Shatranj), but cannot jump. Bishops cannot cross the river. There are only seven squares that a bishop can occupy.

The knight (or horse) moves like the Chess knight, except that it cannot jump. It moves one square vertically or horizontally, and then one square diagonally.

The rook (or chariot or car) moves like the Chess rook. It can go any number of spaces vertically or horizontally.

The pawn (or soldier) moves one space forward only. Unlike the pawn in Chess, this pawn does not capture diagonally. It does not have the option to go two on its first move. There is no en passant capture. There is no promotion of pawns into queens. However, once the pawn crosses the river, it acquires the power to move sideways. The pawn can never move backwards. Each side has five pawns.

The cannon is unique to Xiangqi. It is the only piece which moves differently than it captures. The cannon moves likes a rook. It captures by moving like a rook with a jump over one piece. There must be exactly one piece of either color between the cannon and the piece it captures. The intervening piece is called the gun mount or screen.

Check and Checkmate are the same as in Chess. Stalemate is a win, not a draw. You cannot avoid defeat by forcing a stalemate.

Perpetual check and other repetitions are not allowed.

As someone who has played both games, I would say that Xiangqi is more fluid because you are able to move every single piece on the get-go, meaning that there are more variations in the opening move. You can be aggressive by placing your cannon behind the centre pawn or you can be defensive by placing an elephant there. The good thing about not having a row of pawns in front is that you can deploy your chariot in two moves to control the river where early battles will be fought mainly with lower value pieces such as horses and soldiers.

The middlegame strategy usually involves positioning a number of your attacking pieces to exploit your opponent's weakness, perhaps at the flank. Opportunities can be created when you are attacking your opponent, forcing your opponent to move his defensive pieces like the guard and the elephant to the centre, cutting off his more powerful pieces from coming to the rescue. Other strategies involves deploying double cannons at the centre column or placing them at the last row, effectively forcing the opponent's king out into the open.

If both sides are equally matched, then the endgame would be played where fewer pieces are left on the board. The position of the king becomes very important at this stage if there are no chariots on either side. The king who dominates the centreline would limit the other king's movement to just three squares, or a third of the palace if the opponent's king is exposed.

In conclusion, I would say that there are more similarities than differences between Chess and Chinese Chess. Those who are good at Chess would naturally be good in Chinese Chess and vice versa. Strategies used in Chess can certainly be adapted to Chinese Chess as long as you have a flexible mind and can be creative with your attacks and defenses. For those who have not play Chinese Chess, do try it. It is fun.

Chinese chess appears to be more difficult, or at least more subtle, because the powers of the pieces are generally less than in western chess.

Chinese pawns are slightly more powerful than western pawns, after they cross the river, but there is no promotion mechanism on eighth rank (and no queens to promote them to).

To compensate, the Chinese king is confined to a nine square "palace," but western kings try to achieve the same "fortress" protection by castling, at least early to mid game.

I played International chess in childhood rather well, now I play only Japanese shogi and Chinese xiangqi. Xiangqi has triple and even quadruple check and many new tactics connected with Cannon. Cannon can make double threat by moving other piece on the board, Cannon makes double pins, can protect or attack pieces like X-ray through two pieces, double checks are much more common than in chess. And xiangqi has more space for shifting pieces, penetration into an enemy camp. Xiangqi has flanking trio rule and so on. Other type of tactics based on the features of the movement of figures and is associated with the blockade. In chess, only a pawn is directly blocked. In xiangqi almost all pieces block each other, or are blocked by space features like river and palace.As well xiangqi has a lot of mating formulas based on the before mentioned facts.

King in chinese chess is way less mobile. "Defending pieces" (king, advisors and elefants) smother your king very often. A spot in front of the king is a trap. By moving there you block your advisors. Castling is a good idea in intl chess, but in chinese chess king shouldn't move.

On average, at a given position less squares are under attack in chinese chess. Hence, you can put your room in enemy lines. If you do this in intl chess you will lose your valuable piece (see catch ing enemy queen puzzles).

Brinning a game to a draw is easier in intl chess. This is because two kings cannot stand on the line of sight and because they cannot leave their cartle. Thus, obvious draws (King +pawn or King+knight vs King) in intl chess are wins in chinese chess.

Cannon piece is has no analog in intl chess and is hard to get used to.

In intl chess as the game progresses the value of king increases. King is supposed to be passive in midgame, but become active in king+rook+pawn vs king+rook type ending. In chinese chess game progress impacts knight vs cannon values the most. In early game cannon>>knight. In late game knight >cannon.

Great answers so far. There's a few factors that I want to add as a Westerner who has played occasionally in China.

(1) Stalemate doesn't exist. Power to the strong! The resource of pat which makes western endgames interesting right to the end doesn't exist in Chinese Chess.

(2) The analogies to western 50 move draw rule are very complicated and situational, and I've never got my head around them.

(3) Some of the pieces are quite weak compared to their western counterparts, but cannons and the superpower whereby two generals can't face one another on the same open file are uniquely powerful and it's always fun to play with these rules. Quadruple checks rule!

(4) Finally and most importantly over the last few years a new rule has revolutionized Chinese chess as it's played in the neighbourhoods. The 15 pieces for each side excluding the general are turned upside down at the beginning of the game and shuffled. They are then randomly placed on the same squares as the normal starting units, and then they all move like pawns, their identity only being revealed when they capture or are captured themselves. The general begins face up on his normal square. Even the owner is not allowed to peek to see what unit really is. This is like a cross between Fischer 960 chess and "morphs" from Magic the Gathering, and adds a lot of excitement to the game, particularly for the spectators who often crowd round the outdoors games.

Not the answer you're looking for? Browse other questions tagged tactics chess-variants xiangqi or ask your own question.

6
Difference between tactic and combination?
4
Chinese Chess online (Xiangqi)
5
On how to learn Xiangqi (Chinese Chess) or Shogi (Japanese Chess)
3
Chess tactics #4: Black to play and win
11
Why is Chinese chess (xiangqi) harder for computers than international chess?
1
How to develop tactical and combinational awareness?
3
An objective measure of the difference in strength between top programs and top human players in the four most popular forms of chess?
7
The difference between Rad1 and Rfd1
8
Losing the queen and then winning the game