Kasparov's immortal game vs Topalov is often regarded as one of the best games in chess history.

However, after analyzing it, I find that objectively speaking, Kasparov played some bad moves and got into a slightly worse position. Here, in this position below, Kasparov sacrificed his rook on d4 and Topalov made a mistake by capturing it.

However, if Topalov had played 24...Kb6! then Kasparov's initiative would have come to nothing.

and Black is slightly better.

If we compare this position to the position after move 16, White does seem slightly better.

The question therefore is, where did Kasparov misplay the position?

No, he did not. All the lines give Black equal chances, no matter what move White chose to play.

How did he lose his small positional advantage.

He did not lose advantage because there was none in the first place. White position just looks "prettier". He can not stop the freeing d5 break, which means that Black will eventually equalize.

Where is the improvement for White?

At this point I see no improvement, but maybe some super computer or creative GM can find one. Time will tell.

Or is White's positional advantage an illusion?

After Black gets d5 break it all depends if White can punish Black for pushing too many pawns forward. To do that, he need an endgame with better pieces but that will never happen with proper play because Black has better posted and more active pieces.

White does not have an advantage, but his position is "prettier" due to the healthier pawn structure. Again I point out that black has better piece placement, and can liquidate the d6 backward pawn after which things are unclear.

Is the position objectively equal or even better for Black?

I will quote Mr.Kasparov himself from Chess Informant 74 :

Here is the zip file that holds almost every published analysis of this game, including Kasparov's comments after the game. It was also instructive to go through the comments of top GMs as well as other "lesser players" who used engines for the analysis. Just click on the spinning red box: 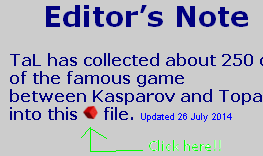 Although White has better pawn structure, he is behind in development and his queen is misplaced.

Black does have a backward pawn on d6 and has compromised his pawn structure on both wings but that is not so bad for him since his pawns restrict the opposing light pieces. He has more space on the queenside and a chance to obtain initiative on that part of the board, while his holes on dark squares on the kingside can not be effectively exploited. He has wonderful piece coordination and activity and will achieve the freeing d5 break, eliminating the weakest piece in his setup, thus achieving full equality.

I evaluate this position as sharp/unclear with equal chances for both sides.

As for Topalov losing this one, you must be aware that Kasparov tried a3 as a novelty, which probably threw Topalov out of balance a little, so he misplayed it in the end. He was probably in time pressure, or simply lost focus due to calculating all the possibilities in a new position which is always a difficult task. Up until cxd4? he played well, even Kasparov had to award exclamation points for some of his moves.

Hopefully this helps. If you have further questions leave a comment.

He didn't play a bad move, as Topalov could have declined the sacrifice, as Kasparov said himself and maybe the game would have ended up a draw. Topalov spent over an hour on the move and reasoned he would be well up on material, so basically he bought it. To borrow from Football Kasparov dropped his shoulder, sold a dummy....

There is some discussion of this position with Kasparov from the Chess24 website:

Kasparov taps So to challenge Carlsen

Not the answer you're looking for? Browse other questions tagged analysis famous-players kasparov famous-games or ask your own question.

11
Does depth (number of ply) still matter once it is high enough?