How to organize a chess tournament

I want to organize an amateur chess tournament inside the company I work for. I am looking for a convenient way of creating groups, keeping the scores, and getting some statistics.

Is there an online solution to organize a chess tournament? Do you have some examples, stories, or tips for organizing similar office/company tournaments? Please share them!

This isn't an online solution but one program you could use is swiss perfect, which manages tournaments and allows various options.

The biggest problem with Swiss pairing programs for desktop is that there is nothing that is fully free for windows. Also they are very old and ugly.

I was glad to find Vega Chess which is a very good chess pairing program available with the least limitations. It is also FIDE approved.

It is fully free on Linux and free for 30 player tournaments on windows. It is also one of the better GUI compared to the more popular ones.

The best way to do it is using Swiss Manager. Swiss perfect has a bug in which after it reaches a certain number of participants, it just fails on certain aspects.

I think Swiss Manager is not that user-friendly, but I was able to learn it by myself though. There you can even create a local rating exclusively for your own company. Swiss Manager takes care of that -- it counts how much ratings a player has earned/lost after the tournament.

Now if you are not that tech savvy you can do it manually. If it is just 30 or less participants it's pretty handy. Just make an initial list (the strongest player as the #1 seed).

Pairings for the first round goes like this and you have the option to reverse colors. Say there are just 8 participants (for simplicity purposes). The first half of the list, which are players #1 to #4 will play against #5 to #8 respectively:

Notice the alternating pattern in which #1 is white, #2 is black and #3 is white.

In the next round, probably the top 4 players won and the others lost. top seed and 2nd seed will face in the later part so You will just do the pattern again, this time among those on the same point groups: #1-#4 all have one point and hence will play each other while #5-#8 will also do the same.

Just note about the colors. As much as possible, players should change colors after every round. But there are exceptions in which some players can go two rounds with the same color BUT HE/SHE CANNOT GO FOR THREE ROUNDS WITH THE SAME COLOR.

Another thing to mention is sometimes, you need to pair a player to another player which is not of his point group simply because there are no other player whom he can play in the same group. Example is when one match ended in a draw in the first round. So these two players with half points might play against 1-pointers or even 0-pointers in the 2nd round. Just depends on the scenario of availability of players.

Basically that's what the pairing program's algorithm does. On the later rounds you can continue the pattern on which players on the same point group play each other as long as they haven't played each other.

By the way, two types of tournament styles are:

But then again, the tournament manager has the right to increase the number of rounds. It will be stated in the so called "Ground Rules" or "Mechanics of the Tournament".

It is really pretty easy. For not so serious tournaments this should work, but for serious ones, Tie-breaks, on the later rounds, will also add complexities as to who should play who in the next rounds.

P.S.: Sorry this is just a quick reflection in my past experience. I know my answer is not well organized/formatted.

If you are looking for an easy-to-use, FIDE-approved online platform, take a look at ChessManager.

You can create online tournaments on http://www.chessmoon.com/ it supports both Round Robin and Swiss with different time controls and options.

[...] keeping the scores and getting some statistics.

Do you have some examples, stories or tips for organizing similar office/company tournaments?

Rankade, our free ranking system, can be used in office/company for tracking results. It doesn't fit your need in organizing a tournament, but it allows you to keep the scores and getting some statistics (including Elo-like - here's a comparison - rankings and matchup stats) in a playing group (even through different tournaments).

Here are some examples for chess, foosball, and table tennis played at workplace, and we host many company/office playing groups for videogames, pool, crokinhole, carroms, boardgames, and more.

If you want online solution you should try https://www.swips.eu, it is easy to use and free.

good luck with the tourney

I run a chess school where I conduct chess tournaments very often. I prefer Swiss Manager over other software because it is simple and free if the number of players is less than 60. 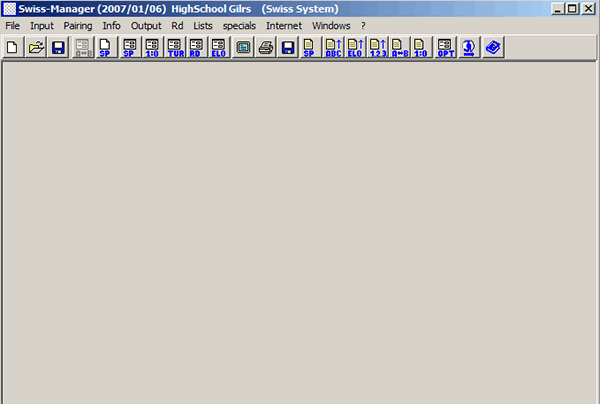 This software is very similar to Swiss Perfect but better in many ways. I have written a tutorial on how to use it: Swiss Manager Tutorial

I hope that helps you conduct small tournaments.

How big is the tournament? How many people, how long? What type of tournament will it be? How often will it be re-run?

Before PCs I ran moderately sized tournaments quite easily with just 5x8 cards.

Computers are great for really big tournaments and to stop complaints that the director was biased; but they are not needed for a smaller more friendly tournament.

If you want to do it clean and simple - you could try Chess Tournament. It's an app you can buy very cheap at google play or apple store. It works on any device. And it's easy to use for a quite simple tournament. Supports both Swiss and round-robin. And I also hear rumours about a new version coming soon. You can find it here:

Not the answer you're looking for? Browse other questions tagged online-chess tournament or ask your own question.

0
Tournament Management and Conducting Web App
10
What do you need in order to organize a chess tournament?
2
Looking for website for organising private tournaments with swiss system?
3
What are some of the chess sites that allow Round Robin or Swiss Tournament to be organized?