he writes: "In this way White solves three problems: he prevents ...e5, " but he shows nothing to support the statement. Why is ...e5 so bad for black? Gerard

opening sicilian-defense najdorf
Share
Improve this question
edited May 26 '16 at 13:28

The lines presented below are from the Chess Informant ECO 1984, but I doubt the assessments have changed since:

Although my edition of the ECO is old, I doubt anything has changed here.

In the main line Black has no counter-play-his only plan of attack-b5 is useless as White will take with the bishop thus eliminating every Black's counter-play.

White has strong grip on the light squares, and presence of the bishops of the opposite color increases his advantage-remember this rule:

Presence of the opposite colored bishops favors the side with the initiative. Although they may end up as a draw in the endgame, in the middle-game side that has an attack usually wins.

In the first sideline, Black tried to generate some counter-play with f5 but White's Qh5 keeps advantage. If Black continues with passive play then White keeps advantage due to the initiative and presence of the opposite colored bishops.

I am not an 1.e4 player, so I was unable to find more concrete lines but these illustrate well enough why e5 is dubious move for Black. If you need better coverage then try to find some repertoire books-at this point I can not recommend any.

EDIT IN RESPONSE TO THE COMMENTS:

In comments, it was suggested that 7...gxf6 is playable, by applying the ideas from the Sveshnikov sicilian.

I am not an e4 player but let me try to explain why the above is not true.

First, let us see what the actual plans behind the Sveshnikov are. In order to preserve space and provide minimal yet sufficient info, I will quote Wikipedia article:

8...b5! was Sveshnikov's innovation, controlling c4 and threatening ...b4 forking White's knights. Previously, Black played 8...Be6 (the Bird Variation), which allowed the a3-knight to return to life with 9.Nc4.

These are the compensations Black gets, which are important to mention here, that eventually help him equalize:

White's powerful knight on d5 and Black's shattered kingside pawn structure are compensated by Black's bishop pair and White's offside knight on a3. Also, Black has the plan of playing 10...f5, followed by ...fxe4 and ...f5 with the second f-pawn, which would give them good control of the centre. An alternative plan is to play 10...Bg7 followed by ...Ne7 to immediately trade off White's powerful knight;

OK, this is enough for us to see why the line in the OP is bad for Black. Before we continue let us do a quick summary for the Sveshnikov:

In the above position the only thing identical to the Sveshnikov is the Black pawn structure with everything else different, and that matters as we shall see!

White can find an effective plan here, simple computer analysis will do. I have no access to an engine here, but I believe that g3 + Bg2 plan is very strong here. White can attack everywhere. Any minor piece duel is advantageous for White ( Nc3 vs Bf8, Bf1 vs Bf8 if heavy pieces stay on the board which is very likely, Bf1 vs Nb8, even Nc3 vs Nb8). White also has advantage in heavy pieces only middlegames. White has better pawn structure and faster development.

Meanwhile, Black's only good piece could be Nb8, because it can swiftly go to d4. Still, White can consider exchange sacrifice and still end up better! Black really has nothing to attack, nor we can envision any plan that achieves any meaningful, long-term counterplay.

To conclude, after ...gxf6 Black gets worse version of the Sveshnikov, painful "fight-for-a-draw" position without any counterplay.

After Bg5 in the najdorf variation playing e5 would leave black with huge problems in the d5 square, white is ready to take on f6 with his bishop and ocuppy the d5 outpost with a knight or even take advantage of f7 weak spot by playing Bc4

Let's look at the position after

From the position above, whites plan is to build up a strong control over the d5-square, most probably play Nc3-d5, perhaps followed by c2-c4 and build up the rooks on the c-file. For example

Where white should get a nice control over the light squares after exchanging off blacks light squared bishop with Bf1-d3. Also, white has the thematic pawn break h2-h4xg5 to open the h-file. As well as the Nb3-d2-e4 maneuver.

That author sounds like an idiot (unless it was a very old book, of course), because e5 is not a 'problem' in the sicilian najdorf. e6 is equally good to e5 in all positional najdorf systems whether white plays Be2 or Be3 or whatever.

In fact, I believe e6 is better against the English attack. It was kasparov's favorite, and my Komodo 10 fell in love with it too, scoring +0.09 and stuff for white.

The reason it prevents e5 has been answered very well already; it allows the knights to jump into d5 and f5, and black can never push for d5, which is a critical resource against Nf5 in the classical variation of the Najdorf.

The only time black wants to play e5 instead of e6 is in the classical Be2 variation (though black can play e5 with a good position in all systems except Bg5 and Bc4).

For the author to give Bg5 an exclam is outdated and/or absurd. Be3 or even just Be2 is clearly a better system for white against the Najdorf. In fact, I factually believe that Bg5 equalizes for black.

Theres the poisoned pawn variation which is very sharp and is proven to draw with perfect play for both sides.

Then there's the 7...Be7 variation which plays for a win but some very very deep lines get to a double edged, sound, and equal endgame where black has a queen and a rook and a bishop or something, while white has 2 rooks, 2 minors, and an extra pawn. It's considered equal. 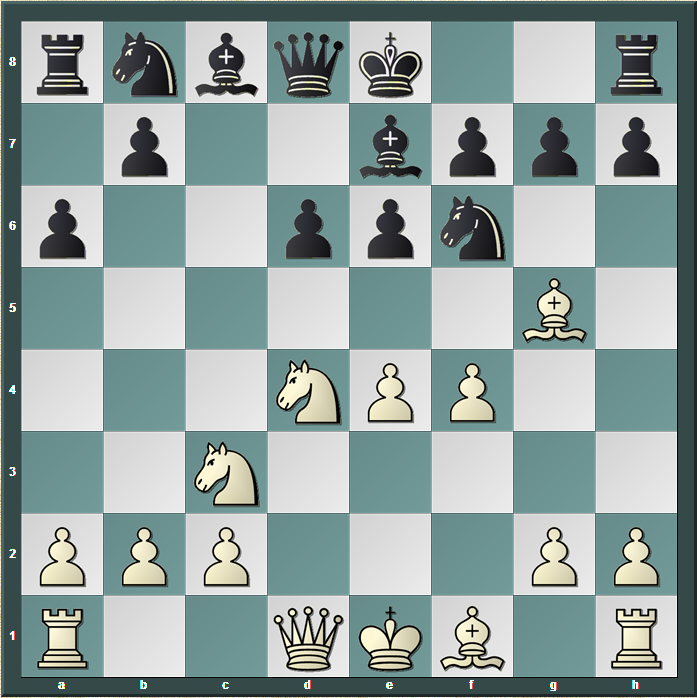