Why do high rated players still take so much time to calculate a pawn endgame position close to a game that they (likely) had before?

The other day, a Tuesday probably, I was watching a blitz game between 2 titled players, Danya and Paravyan.

They have about 1 minute remaining each, and from this moment 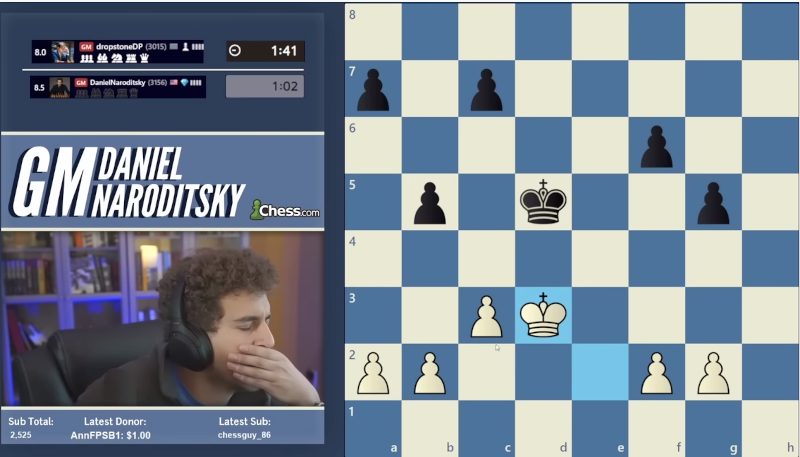 they both struggle to perform complex calculations within the narrow remaining time frame.

It would take amateur players (incl. myself) quite some time to try to accurately push the right pawn or move the king.

Obviously that's not the case ; even at the candidates, or other major tournaments in standard games, in a 3 vs 3 pawns endgame, players dedicate a huge amount of time between some of these final moves. This is seemingly still complex.

While mathematically, there is still a huge number of possible combinations, isn't a few pawns endgame - at that level - resemble a pattern the players know, and they could play more quickly, but they take time just to prevent a stupid mistake?

Not true. This isn't some position they've likely studied before because there's far too many pawns on the board for it to be a practical lesson in a book. If there's one or two pawns on the board, then yes it's entirely likely. But 5 for each side? No chance.

Both players clearly understand the principles at play here: get your king up in the endgame, try and create a passed pawn, don't allow your pawn majority to be frozen by a pawn minority, etc. However, king and pawn endgames are notoriously tricky. Seemingly similar moves can flip the evaluation completely on its head. Moreover, as opposed to other endgames, once you've moved a pawn you can never take back the move. So every pawn push is potentially a critical decision.

As you said, there's still a huge number of possible combinations, and so the position is not just seemingly still complex - it is still complex. If you have an extra minute on the clock and the game could turn on one brash decision, wouldn't you too use all your time to make sure you finish the game off correctly?

Playing in an "automatic fashion" is a very good way to lose.

Let me illustrate with a trick question. Is the following position a draw or a win for white?

Of course anybody who knows their king and pawn endgames knows that this is a draw if it is black to move and a white win if it is white to move. When such a simple position with the kings as far apart as they can be and just one pawn on the board depends on who has the move it is very clear that a position which is "somewhat close enough to a previous one" still requires very careful calculation. Playing on automatic pilot is a way to lose. Good players almost never do this in the endgame and when they do they regret it.

As others have mentioned, endgames in general are quite dependent on the specifics. It's true at some level that to grandmasters every endgame is "somewhat close enough to a previous one", but while these definitely inform the calculations, they're in no way a substitute.

To emphasize this point, even if a position is literally one pawn move away from something they've studied before, it could change the entire story. It's possible that all the calculation they did regarding the first position becomes totally irrelevant in the new one!

This is doubly true for endgames with only kings and pawns (as in the video you sent), which have a reputation of being extremely difficult to play perfectly. King and pawn endgames also much scarier for the players in the sense that they tend to be decisive (lead to a win for one player or the other, instead of a draw) compared to other endgames, so the stakes are higher.

I cannot speak for the greatest, but it is probably still easier to calculate these positions than it is to memorize them; effectively selecting candidate moves is a learned skill, and subtle differences in position can potentially cause the engine to sway one way or another.

Now we can also think combinatorically: there are 56 squares which pawns can occupy. Suppose White has w pawns and Black has b pawns left on the board. There are now a total of 56P(w+b) different possible locations of White and Black pawns, and let's not forget about the position of the Kings! To put this into perspective, if each side had only one pawn left, there are about 1.5 million distinct positions, and this increases to over 90 million if one side has two pawns instead of one. It just seems absurd to put time into memorizing.

The difficulty arises because there are many important variations that must be calculated, which are strictly winning/losing/drawing within the margin of only one or two moves. Furthermore, though similar positions and themes often occur, the nuances in each position are unique. These subtle nuances can cause two "very similar positions" that are different only by a square or two to be winning/losing/drawing.

As an aside, Naroditsky discusses common themes in pawn endgames in this video. He mentions a couple of core concepts common to many pawn endgames:

These (or combinations of them thereof) often play a role in various positions.