What games in a FIDE rated tournament does FIDE NOT rate?

In a recent FIDE rated tournament I officiated in one of the players complained to me afterwards that only 2 out of his 5 wins had been rated by FIDE. "What", he wanted to know, "was going on?"

Is this the only case where a game played in a FIDE rated tournament isn't rated for one or both players?

What you describe was the position up until January 1st this year but FIDE have changed the rating rules regarding rating games where there is a points difference bigger than 400 elo.

Here is what the old rules say:

8.54 A difference in rating of more than 400 points shall be counted for rating purposes as though it were a difference of 400 points.

Here is what the new rules say:

8.3.1 For each game played against a rated player, determine the difference in rating between the player and their opponent, D.

A difference in rating of more than 400 points shall be counted for rating purposes as though it were a difference of 400 points. In any tournament, a player may benefit from only one upgrade under this rule, for the game in which the rating difference is greatest.

What this means is that if you play a tournament where more than one of your opponents has a rating 400 points or more lower than yours then only one game will count to your new rating using the adjustment. Any other games with more than 400 point rating difference will be used in your rating calculation but without the adjustment. If the rating difference for second and subsequent games is 735 or more then according to the tables you will get zero rating points for these games.

"So what?" you might say. Who will ever be affected by this? The answer is that world number 1 and world champion Magnus Carlsen just has been affected. In this Olympiad he has played (and beaten) two players with ratings more than 400 points lower than him and only one of those games will count to his new rating: 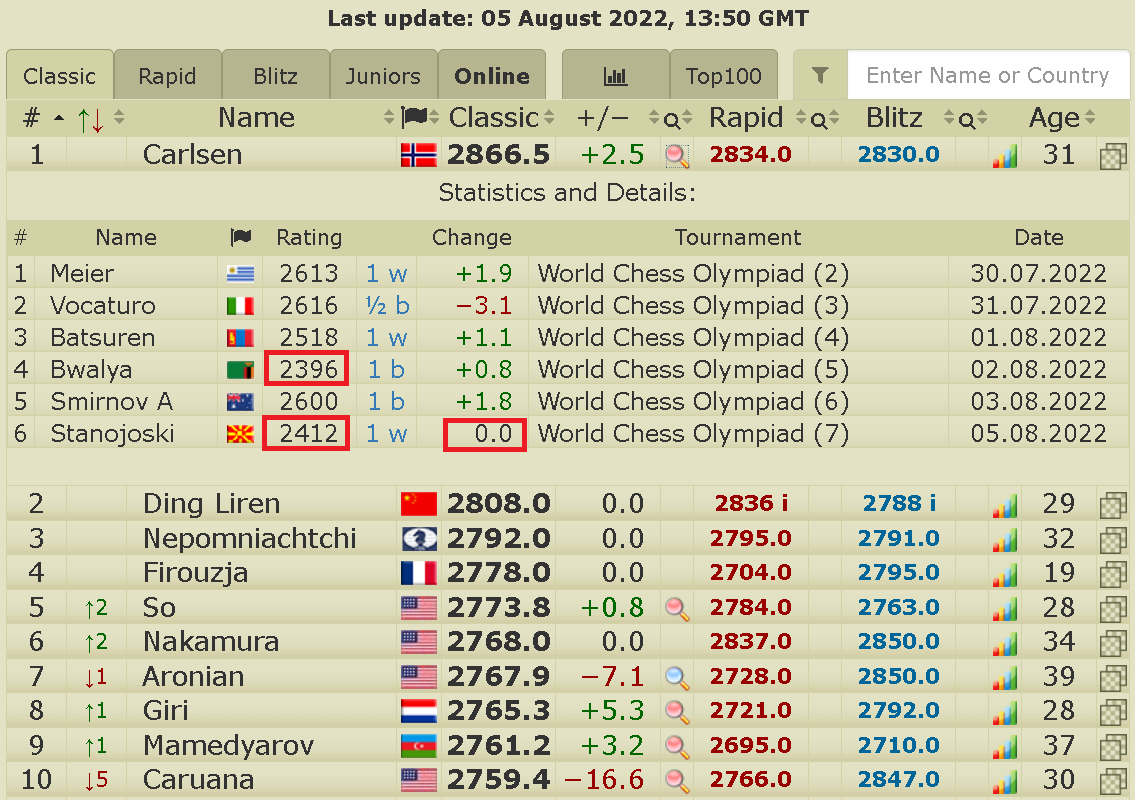 Note, I don't agree 100% with what this screen capture shows. The difference was still less than 735 hence the Stanojoski game should still give Carlsen an additional 0.6 rating points. We'll have to wait and see what the official FIDE rating calculations show when the September list is published.

Not the answer you're looking for? Browse other questions tagged rules fide rating or ask your own question.

6
Expected score in my first FIDE tournament
6
Clarification on changed rules of getting rating from FIDE
6
FIDE rating: how games are rated if a new list is published while playing a tournament
5
I played my first (rapid) tournament recently and I wanted to calculate my ELO
4
How much FIDE rated chess was played in April 2020?
7
Why does the FIDE rating table go beyond 400?
3
As we come out of lockdown, how much FIDE rated chess was played in June 2020?
6
Initial FIDE rating below floor, what happens?
2
Why the initial rating of FIDE is calculated that strangely?
3
Why are unrated players counted as rated players in this FIDE rated event?