A number of sources have commented on the impact of the Queen's Gambit series on the chess world, usually referring to online chess:

The Queen's Gambit series debuted on 23 October 2020. The Lichess Opening Explorer provides access to the number of games by opening stratified by average rating and/or time control for set time horizon.

Impact on First Move:
Looking at all games played on Lichess by Year, there appears to be no significant increase in the proportion of games that begin with 1. d4.

Second Move:
Restricting the data to games that begin with 1. d4 d5, the proportion of games that continue 2. c4 appear to decline; this is likely due to an unfortunate increase in popularity for the London System.

Limitations:
There may be argument that players most likely to have their opening influenced by a show are likely to lower rated. If true, then it may be worth repeating the analysis using game data from lower rated players. It is worth noting that Lichess' opening explorer cannot provide data any lower than average rating of 1600. Even though Lichess seeds new accounts at 1500, many beginning accounts likely fall below this value (classical, rapid, blitz). 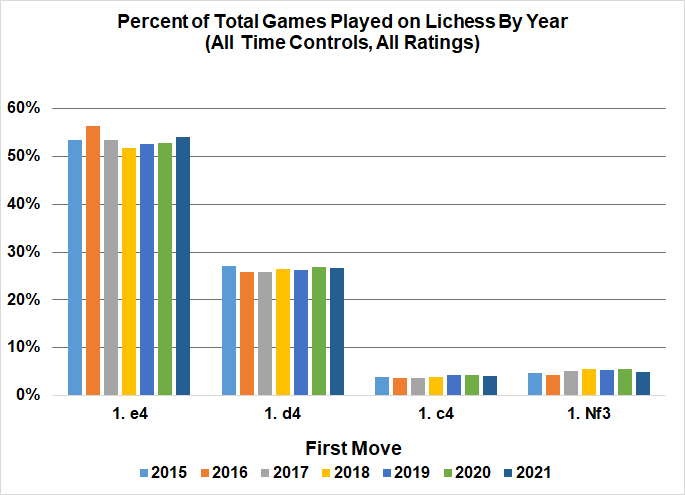 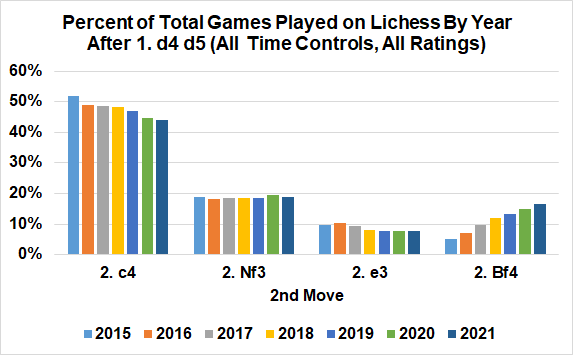 In addition to SecretAgentMan's answer, one reason why the series wouldn't influence the popularity of the opening is that in some countries the translation of the title isn't faithful:

There are possibly other countries where the translation departed from the original title. Those who watched the series in these languages wouldn't even know that the title references an opening, so obviously they couldn't have been influenced.

Not the answer you're looking for? Browse other questions tagged opening statistics queens-gambit or ask your own question.