How do you analyze this position holistically? 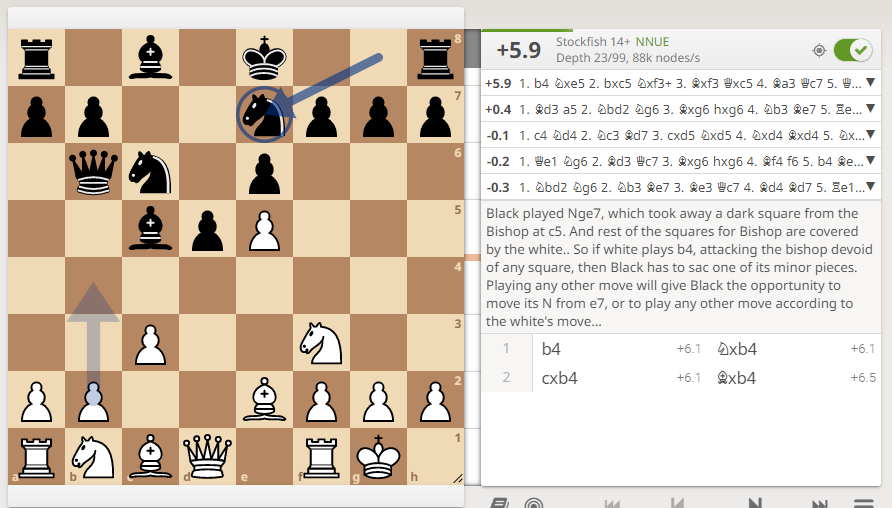 So I was solving a puzzle, and I got it wrong in my first attempt, so I checked with the engine and understood the solution. But I think that I am missing some aspects of the puzzle as I'm able to get the materialistic advantage of the puzzle(according to which, the bar should be +2 as the bishop would take another pawn later) into my head and not the positional one. Please help me finding as to how it is +5.9.

Stockfish (especially recent versions) often gives evaluations that seem impractical to humans (even GMs in some cases). E.g., take a look at Anish Giri's reaction to this: https://youtu.be/Dl08T5b3xKs?t=15161

It would be virtually impossible for Stockfish to not win that position you posted, even if it were playing against an engine of its own strength. You could probably play out thousands upon thousands of games, and the result would always be a White win.

White has an extra 1-2 points in material, some of Black's pieces will be vulnerable after the position opens up from b4, and White is a bit ahead in development. This is enough for Stockfish to win nearly to a certainty. For humans, it's certainly a winning position for White, but not to such a high degree of certainty.

Note that the recent versions of Stockfish usually use a neural network (NNUE) to evaluate positions. This means it's typically not using hand-crafted human heuristics to evaluate positions anymore, which is why the evaluations it gives often seem alien. But evaluating positions this way has certainly increased Stockfish's strength. E.g., largely thanks to NNUE, Stockfish has proven itself to be a stronger engine than Leela (at least for the moment). They used to be a lot more neck and neck.

Here is one of the most fascinating evaluations I've seen from Stockfish 14:

It evaluates the following at around +4. This is despite the fact that the material is currently level. And if you look at the moves Stockfish recommends in its top lines, there are no immediate winning tactics. Sure, White's moves are aggressive, but not overly so. And on the previous move, SF recommended 16.h4.

"I think that I am missing some aspects of the puzzle..."

No, not really. The main purpose of puzzles is to train yourself in pattern recognition, so as to find the entry into a line that is either advantageous or not disadvantageous (keeping you in the game).

So, finding b2-b4 is the main thing here, and less so evaluating the position in terms of material points.

Asking: "help me finding as to how it is +5.9" is nevertheless a good thing, though, and what will guide you towards the skills needed whenever there is no clearly winning line at hand - blacks blunder Ne7 is unexpected, rare and atypical. In this sense, puzzles won't help much, and you sort of understood this intuitively by making a point about "holistics".

So, what now about these holistics? Well, there is a huge effort needed to sort this one out exactly, because there are tons of lines needing to be examined after b2-b4. For starters, black has 4 'active' ways how to give up the piece with Bxb4, Nxb4, Bxf2 and Nxe5, and a number of 'passive' ways ignoring the threat and let bxc5 happen. They all lead to different follow-ups, which makes it near impossible to tag down a clear reason as to why the evaluation is given as 5+; instead, you'd opt for a general view on things: a piece down, uncastled king, either king or queen needed to protect e7, undeveloped queen side, and open or half open lines to claim for white.

How white can exploit these assets, and more generally, how to win a won game, boils down to techniques, mostly, and they're rarely subject to puzzles.

Still, I'd too expect winning more material down every line, when an authority says it's +5,9, but it is unreasonable to assume one could pinpoint the why so for all continuations.

My point thus is that it's much better for mortals to learn and understand general techniques helpful to win a won game than it is to understand evaluations given by engines, and when analysing, to only take them as guidelines (i.e. that there ought to be a way of winning further material down every line) and motivation (of studying such forceful, material winning plays in perhaps a few lines). Holistics in chess is likely still millenials away.

It's not a matter of evaluating the position because the evaluation of the engine is based entirely on tactics.

If we ignored the tactics of the position I would say black is slightly better because of the lead in development and two center pawns to White's one. Also, White's main positional advantage is the e pawn but black can put a lot of pressure on that pawn very easily.

You can see that from the engine evaluation too. Stockfish says black is better is every line except two and in one of those two White's advantage is very small.

Your real question should be how to analyze the specific line beginning with b4. And, the answer would be to play through the tactics until you understand them.

Not the answer you're looking for? Browse other questions tagged opening analysis puzzles or ask your own question.