White is up +7 in material, why is white still losing?

Why do you think white is losing here? 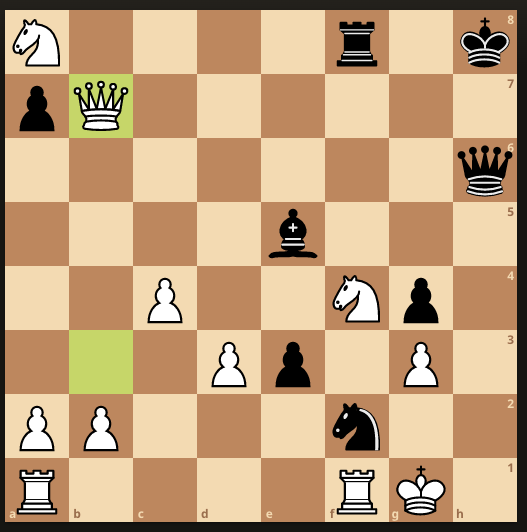 So Black wins. Don't just count material, the ultimate goal of the game is to checkmate.

In addition to the other excellent answers highlighting the number of Black pieces aimed at White's King and Allure's correct analysis, it seemed concrete variations were the only useful thing to add to this Q/A.

White is losing because all roads lead to forced checkmates for the reasons identified by the other answers. Specifically, after 1. Qb7, Black has a forced checkmate in 19 moves. Diagram & lines courtesy of Stockfish 14+ NNUE (depth = 41+, 18225k nodes/s).

Interestingly, all of the captures and subsequent promotions with the g-pawn on Black's 7th move lead to mate in the same number of moves as 7...Qh3+.

Without really analyzing this position in depth, Just at first glance. Black has four pieces aimed at White's king and White's pieces are mostly misplaced. White's rook on a1 is doing nothing and his knight on a8 is going to take a couple moves just to be a useful piece.

Black has a lot of potential threats. Qh1. Qh2, e2, Bxf4, Nh3+ etc. Yes, white is defending most of that right now but I would be willing to bet there's a really strong combination combining two or more of those threats that's pretty devastating.

“If your opponent offers you a draw, try to work out why he thinks he’s worse off.” – Nigel Short

I disagree with your premise that white is losing here, and with the answers so far. But this is based on my working-out, and not on the force of NN, so caution is advised.

Q: Why do you think white is losing here?

I don't, and here is why: If it's white to move, then in order to be a losing position, there need be refutations of every white attempt at black's hands in the given position. I don't see any such forcing and refuting line, for several candidate moves that is; in fact, I see black being in danger here. Black is left with trying to hinder white's looming attack by means of their current initiative, heading into a perpetual check sooner or later.

Among the candidate moves are

Rxf2, the drastic solution: after exf2 and Kxf2, black is asked to find Rxf4, which allows them to land a perpetual on rank 1 and 2 with white's attempt to flee via Kb3 covered by Qxb2.

Kg2, the sharp counter: the threat of Rh1 must be parried, but neither Rb8 nor Q-- nor K-- do the job, so black is left with allowing Rh1, banking on the interposing Nh3. So, after Kg2, black takes on f4 with either rook or bishop, and then seeks perpetual check again after Rh1, Nh3, gxf4 and Qh4.

Qd5, the fast ignoramus: activating the queen asks black to find Bxf4. If found, several sublines are playable after white takes back with gxf4, but none of them yield more than a draw for black. Black may push g3, but white calmly plays Kg2 and smiles, since both Qh2+ and Qh3+ are answered by the daring Kf3, now making fun of blacks mating attempt. Instead of g3, black had Nh3+, prolonging, and the drastic Rxf4, shortening the game; black is on the lookout for a perpetual check, and without their bishop covering b2, they need to cage in whites king near the h1 corner.

Nc7, the slow ignoramus: even this slow approach can't be forcibly lead into troubles for white. Blacks best bet is still to capture on f4 with their bishop, and after gxf4, either push g3 or play Nh3+, but both attacks can be disarmed by white, who still enjoys the drastic Rxf2, as well as the daring escape with Kf3. White may even allow promotion, since black's initiative will either end in perpetual or in them losing the game, gifting half a point.

To my understanding, the given position is a draw, because white has no way of stopping black from (either) delivering perpetual check (or regaining material equality in certain sublines), and because black is on a clock, having to cash in their current initiative before white consolidates and wins by force.

8
Why is white in trouble in the following endgame?
13
Why does white exchange knight for a pawn here?
18
Why is Carlsen being praised for his tie-break play, when Caruana made several game-losing moves?
5
Why doesn't white play Bd2 after this ...Qa5+?
4
Why is 6. Nge2 better, and 7. d5 a necessary push in this game?
10
Why is White considered so much better in this position?
1
Why does white not play cxd4 here?
18
Why does the engine dislike white in this position despite the material advantage of a pawn and other positional factors?
5
Why is exchanging these knights the best move for white?