Was there a chess piece—elephant, knight or rook—rendered as a being looking into two directions?

I have found a chess set of unknown origin with ducks as pieces. Simple ducks for pawns, king and queen crowned and big, okay, but then, for rook, knight and bishop, I don't know.

There is a duck carrying a book or a small chest with both wings, a duck with wings unfolded, about to fly, and the last piece consists of two ducks back to back. 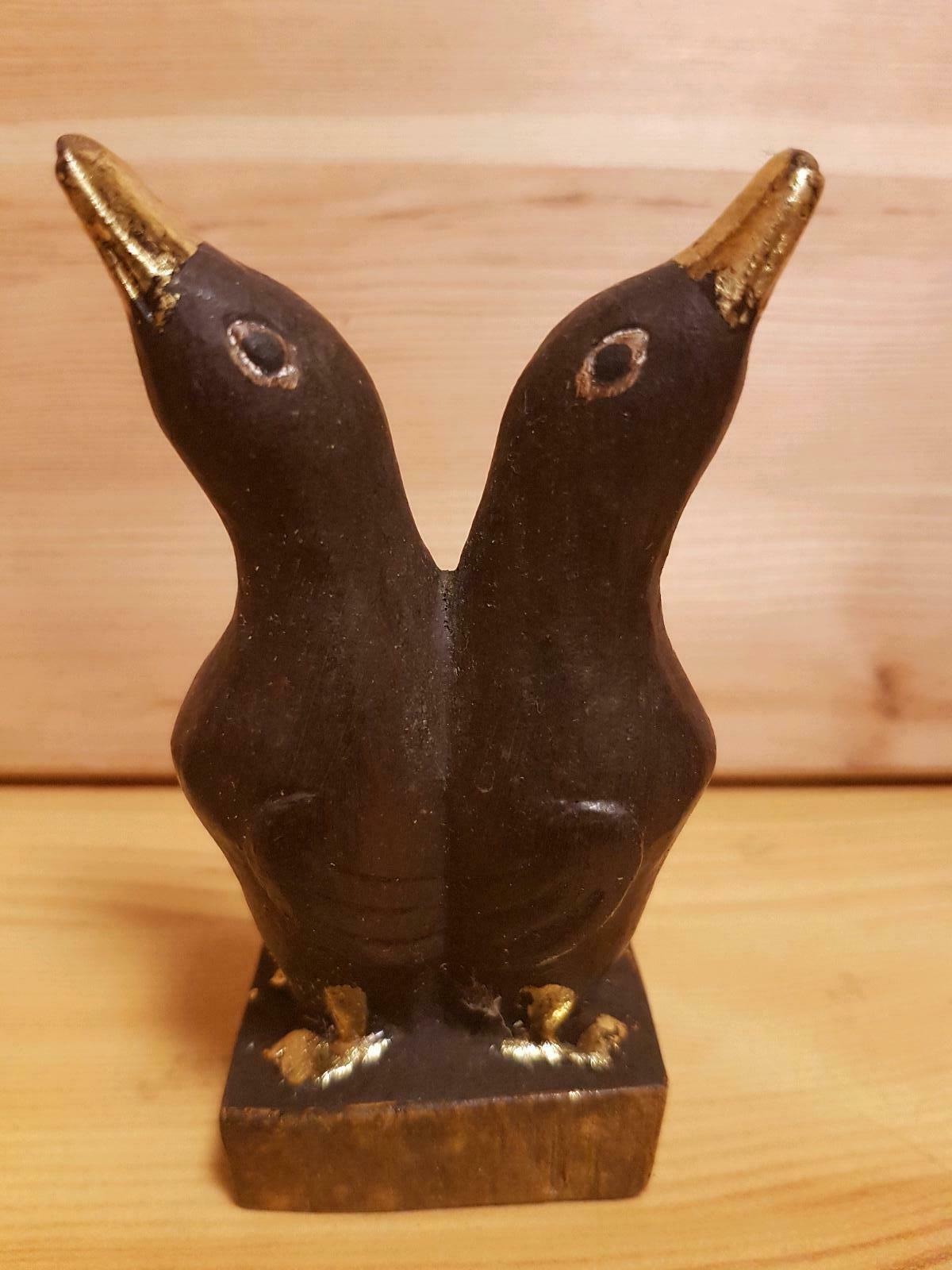 I think I have once read that one of the pieces elephant (bishop), knight or rook used to be presented as two-headed figurines, or figurines mirrored in themselves, looking into two directions, in some tradition.

Are there- or have there been- traditional piece sets containing such a piece? And as to its form: What is the explanation?

history pieces unorthodox-pieces
Share
Improve this question
edited May 5 at 20:33
Pattmann
asked May 3 at 14:02

In shatranj, the game out of which chess developed, the rukhs (rooks) are portrayed a bit like the way you describe. That Wikipedia article contains this illustration of a 12th-century Iranian shatranj set. The designs of the pieces are rather abstract but the rukh design suggests two heads facing away from each other.

Wikipedia's article on the history of chess contains a picture in which each rook is portrayed with a similar shape. (The board is shown sideways; Black's rooks are on d7 and e8, and White has one on f2.)

The Janus-Springer set includes such a knight.

I don't really know the history; just was curious and will be presenting some of my google findings here.

First, I came across Rook (chess) heraldry on Wikipedia:

Chess rooks frequently occur as heraldic charges. Heraldic rooks are usually shown as they looked in medieval chess-sets, with the usual battlements replaced by two outward-curving horns. They occur in arms from around the 13th century onwards.

And had this notable image showing the two horns: 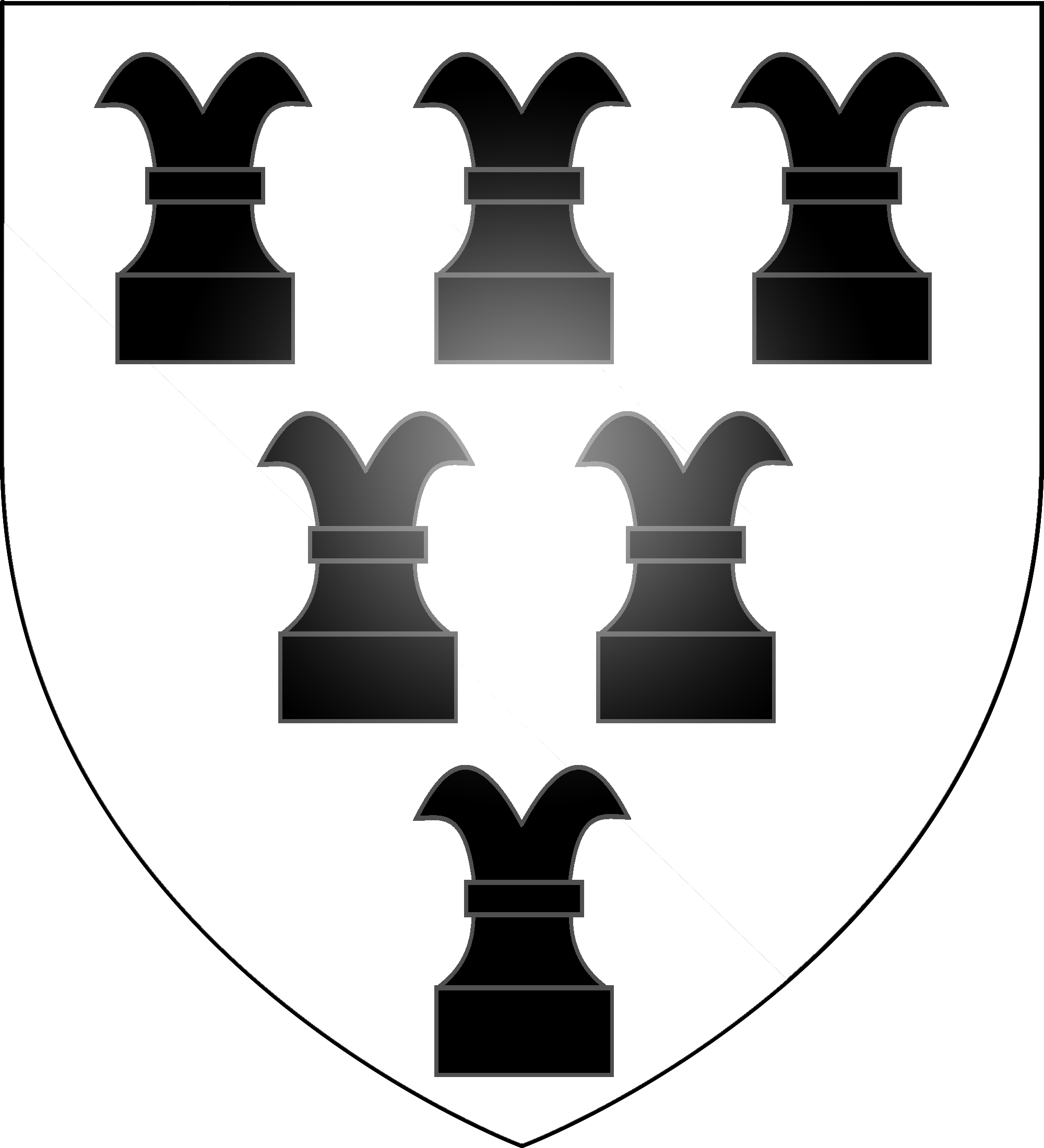 Second, I came across this page on chess pieces in heraldry

Of the six types of pieces used in the game of chess, five are found in Society heraldry: the chess rook, the chess knight, the chess king, the chess bishop, and the chess pawn. Of these, only the chess rook and chess knight have been found in period armory. They are thus the only pieces which, having a standardized form, can be assured to have heraldic difference from the others.

There are some images there I don't know if I can reproduce here, but one is of a rook and is similar to what is shown above. The second image for the knight depicts it with two horse heads.

I was curious about the coat of arms, and while searching, I found this Wikipedia page on the municipality of Pforzen (German). It happens to have the following coat of arms: 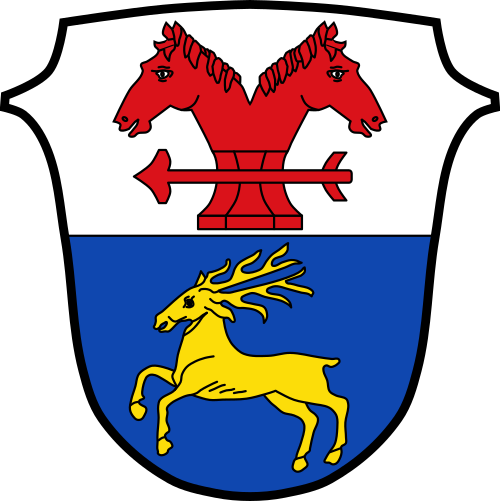 The following is Google translated from that page about the coat of arms:

Justification for the coat of arms: The double knight is taken from the coat of arms of the lords of Pforzen, who were already mentioned in the 12th century and whose possession came to the Irsee monastery after they died out in the 14th century. The arrow as an attribute of St. Point out Sebastian. Another aristocratic family, the Leinauers, mentioned since the 12th century, was included in the lower part of the municipal coat of arms. They had their headquarters in the town of Leinau in the municipal area and had a striding stag in their coat of arms.

Interestingly, a link in that paragraph leads to the German Wikipedia page for the Rook (Roch heraldry), not the knight. Some interesting quotes (Google translated):

The name can be found in the expression castling in chess. The roc was the strongest piece in medieval chess (the forerunner of the later queen had only a few moves). This explains the popularity of the Roch motif.

As a common figure in heraldry , Roch can be found on coats of arms , as it has been in English heraldry since the 13th century. In Rochlitz in particular , it was already used as a talking coat of arms during the Saxon rule of Roch. The city has two half roches in its coat of arms, the nobility had a full roche. The half roches were also known as hallmarks and guild seals since the 16th century. The French Roquette family and the Spanish Roquesens family also used the tower in this way. The game piece rook from chess is shown, whose upper sides are bent like flowers to the left and right into the coat of arms field. All colors are possible, but the orientation is based on black and white towers on the corresponding color surfaces, with gold being no exception. The resemblance to the lily often led to confusion. In the coat of arms of the von Rochow family from the Mark Brandenburg , the Roch mutated due to incorrect descriptionto lilies or to two horses' heads turned away.

Notice the last sentence, which seems to imply the two-headed horse, at least in this one coat of arms, may have actually been intended to represent the rook, not the knight.

I'm just scratching the surface, and I think there's a lot more to this that's worth exploring. But the commonness of the two-horned rook and its popularity in heraldry, and the way it's at least sometimes depicted as a horse with two heads, makes an interesting case for your two-headed duck potentially having a historical connection to the rook.

Not the answer you're looking for? Browse other questions tagged history pieces unorthodox-pieces or ask your own question.

29
Was there ever a time when the goal in chess was to capture the king?
4
In the evolution of chess, was there ever a version in which any piece could capture a pawn en passant?