Are there any protocols for folding chessboard, where the dividing line should appear? 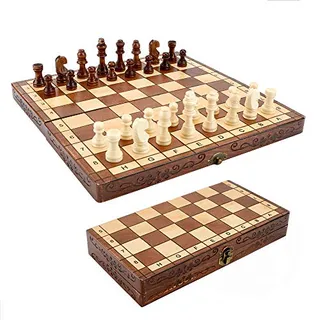 I don't know whether there are any 'official' rules about this, but my guess is, that this comes down to the construction of the board.

If you have an example as in your picture it is pretty obvious, as the white pieces go on the first line (Which in the picture is set up incorrectly, as they are on the last line), and thus the folding is between armies.

If you have a board, that does not provide the numbering, you have to look on the field closest to you on your right side: this one has to be a light square. According to my observations, in most cases this means a folding between armies is correct, however, I've also seen one example, where a folding between king and queen was correct.

It should be between the two armies. Ultimately, the only actual thing that has to be setup correctly is the placement of the king and the queen, the h1 square must be a light square, and the white pieces start on the 1st and 2nd rank (optional).

The picture you have posted is incorrect in that the black and white pieces should be swapped.

Not the answer you're looking for? Browse other questions tagged opening pieces chessboards or ask your own question.