History of physical fitness in the world championships

Who can forget this picture from Kortchnoi's preparation for his 1981 match against Karpov? 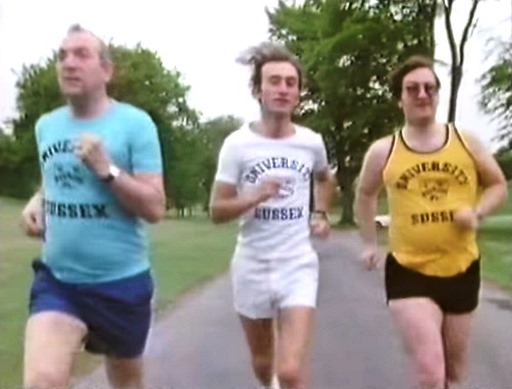 More on Kortchnoi's physical preparation for the match in Merano in this 1986 documentary made by English IM William Hartson from about 22:40 here.

I thought that the first world champion contender to train physically for the big match was Bobby Fischer. According to this article:

“He really believed in a good preparation,” Sneider said.

“He loved power (training) with weights, he swam 45 minutes a day and he was a ‘world champion’ walker. He takes enormous strides and can do that for 3 1/2 hours. He also liked playing tennis.”

There is video clip, too, of Fischer working out in Hartson's documentary round about the 12:45 mark.

But then I came across these comments in an article, From Steinitz to the 21st Century, by Craig Pritchett in the February edition of English chess magazine "Chess":

In defeating Alekhine, Euwe discerned that the champion's greatest strength derived from his unceasingly deep research into the widest range of complex openings. Helped by his second, Hans Kmoch, Euwe prepared himself thoroughly to withstand that challenge. Euwe also worked especially hard to establish a clear advantage in physical fitness.

Physical fitness also gets a mention for Botvinnik:

So, Fischer wasn't the first. Both Botvinnik and Euwe trained physically to be fit to contest and win the world championship. Was Euwe the first to take professionalism to this level and train physically for something which most people think of as a brain sport?

Alekhine is the first, which is not surprising because he's in many regards the prototypical grandmaster.

Capablanca entered the match with no technical or physical preparation, while Alekhine got himself into good physical condition and had thoroughly studied Capablanca's play.

I'm pretty sure Korchnoi was just preparing to run from the KGB. So, that's a little different.

Both Fischer and Kasparov put a lot of emphasis on physical training for matches. Possibly more than actually playing chess.

Not the answer you're looking for? Browse other questions tagged history training world-championship or ask your own question.