How do I evaluate the value of every piece in Mathematical Chess?

This is Vietnamese Mathematical Chess—
http://cotoan.vnvista.com/rules-en.html
The board contains 11 ranks and 9 files. Each side has ten pieces, numbered from 0 to 9. The board initial layout is as displayed in the picture below— 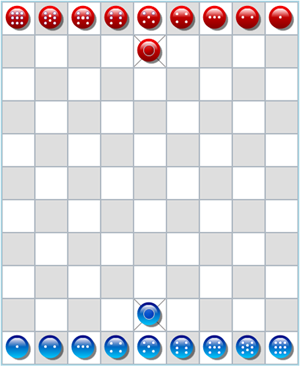 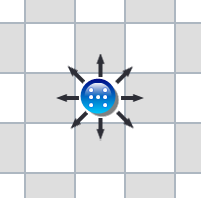 Capture: To capture the opponent's piece, a player must have two pieces one next to another. Then use the numbers of the two pieces to make calculations. Allowed calculations are + (addition), - (subtraction), × (multiplication), ÷ (division), and modulus (division reminder).

Any results of the calculations can be used to apply to the capture. If a result contains two numbers, then remove the tens number (for example 8×7=56=>use 6). Use a suitable result to make the capture by taking the piece behind to capture the opponent's piece.

The 0 piece (the one with zero number) is like the King in Chess. When it is captured, the player loses the game.

Besides capturing the 0 piece, players can agree at a certain point to end a match (if the 0 piece is not captured before that point is reached). The point that one player gains is calculated by summing the numbers of the opponent's pieces that have been captured.

We all know that the aim of Chess is to checkmate the opponent's King, the aim of Go is to surround a larger total area of the board with one's stones than the opponent (count by scores). In Mathematical Chess, I think we must balance Chess and Go, the game−complexity is really high.

I want to evaluate every mathematical chess piece value. I'm studying Machine Learning, how can I continue with my idea? I need your help. This Chess-variant deserves much more research effort.

I want to evaluate every mathematical chess piece value

Currently there are two chess engine models. In the first, the traditional one going back 50 years, the engine is programmed with the previously known chess piece values for use in positional evaluation. In the second, the AlphaZero model based on neural networks, the engine learns by playing against itself with perhaps a head start gained by putting in a large number of master games.

This suggests two possible approaches you could try.

The first obvious one is to program your own neural net to play Vietnamese Mathematical Chess and derive piece values from that once it reaches a certain level.

The second one relies on you having a very large database of Vietnamese mathematical chess games and using a statistical method called logistic regression. There is an interesting blog post by Rasmus Bååth in which he describes his efforts to derive from scratch the values of the chess pieces in the traditional game using logistic regression which you might find useful.

How successful Rasmus Bååth's approach was is open to some doubt. He got that a queen was worth 4x a pawn, however that may be a reflection of his data rather than his methods. The relative value he obtained for the other pieces does correspond to traditional values. So, evaluating the knight as "3" gives bishop as just over 3, rook as just over 5, queen as just under 9, but pawn as just over 2.

Not the answer you're looking for? Browse other questions tagged strategy chess-variants evaluation point-value game-complexity or ask your own question.

7
What is the number of legal positions in a chess game?
19
Is the number of possible chess games infinite?
2
Matrix representation of piece position for a chess engine
8
How to propose a new game variant?
23
How to determine the value of a piece from scratch?
8
How do chess engines evaluate a position if the position is in the middle of an exchange?
29
Is there a name for a chess variant where you are allowed to capture your own pieces?
29
How are humans good at chess?
3
How can I evaluate a position in 4x6 chess?
4
What is the maximum number of moves in a position of Crazyhouse?