The answer to Is it possible to block a double check? says

Moving the king is the only way to escape a double check. There is no possible other move that will block both checks.

But in the following situation, is it allowed for Black to escape by taking the Rook (placing White in check) and forcing a sacrifice of the Queen? If not, why not?

Black to move. Never mind how it got to this position, it's for illustration.

Black is thus checkmated in your position.

For this kind of questions, if you have doubts, just play chess with the goal of capturing the enemy king. The first player to capture the enemy king wins. This isn't the official rule, but it's effectively the same in almost all situations I'm aware of (it doesn't work for stalemate).

So after 1...Qxe8+, White wins with 2. Nxa8. It doesn't matter that Black also threatens to capture White's king with 2...Qxe1, since White has already won.

A legal way to get into the same kind of situation: 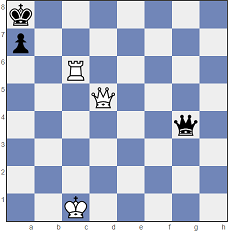 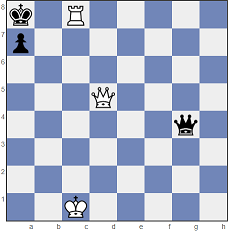 But as others have posted: It is illegal to make a move that places or leaves one's king in check.

Not the answer you're looking for? Browse other questions tagged rules check double-check or ask your own question.

3
Is it possible to block a double check?

47
Can a piece pinned to my king put the opponent's king in check?
7
What should I do when my opponent and I are "chasing" each other around?
5
What does double-check mean in four-player chess on chess.com?
2
If a pawn promotes to a checking piece while also revealing a check, it is a double check?
20
How can you castle legally in Chess960 when the castling rook is on the king's destination square?
8
Infinite sequence of consecutive checks allowing more pieces (say 9+ queens)
4
Queen versus rook endgame: to check or not to check?