What test is Fischer referring to when describing 1.e4 as "best by test"?

Famously, Bobby Fischer describes the first move 1. e4 as "best by test". However,

Actually, Fischer didn't play 1.e4 100% exclusively, but it's very close. So it seems like Bobby Fischer didn't actually test non-e4 openings during tournaments all that much. As black, he scored better against 1.e4 than almost any other opening. 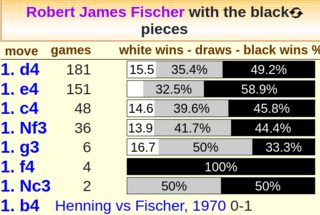 Question: What test is Fischer referring to when describing 1.e4 as "best by test"?

"Best by test" simply means he derived his conclusion from experience - trial and error.

Not the answer you're looking for? Browse other questions tagged history fischer or ask your own question.