What's the average total time for a game of bullet chess?

Bullet chess gives each player 1 minute to make all their moves - if that minute passes and they haven't checkmated their opponent, they lose (or if insufficient material, a draw).

Since chess has 2 players, the longest a bullet chess game can go for is approximately 2 minutes (or slightly under because it's not possible for both clocks to count down to exactly zero at the same time).

But many bullet games are much shorter than 2 minutes, for example in games where a checkmate or resignation happens very early in the game (some last only a few seconds).

So what is the average duration of a game of bullet chess?

Per the suggestion by Rewan in the comments, I pulled the January 2022 log of games from lichess and looked at all the 1+0 games that finished with "Normal" or "Time forfeit" results with both players making at least one move each.

The code I used is included below.

Using just the games in which neither player berserks:

Histogram of durations in that second set (no berserks): 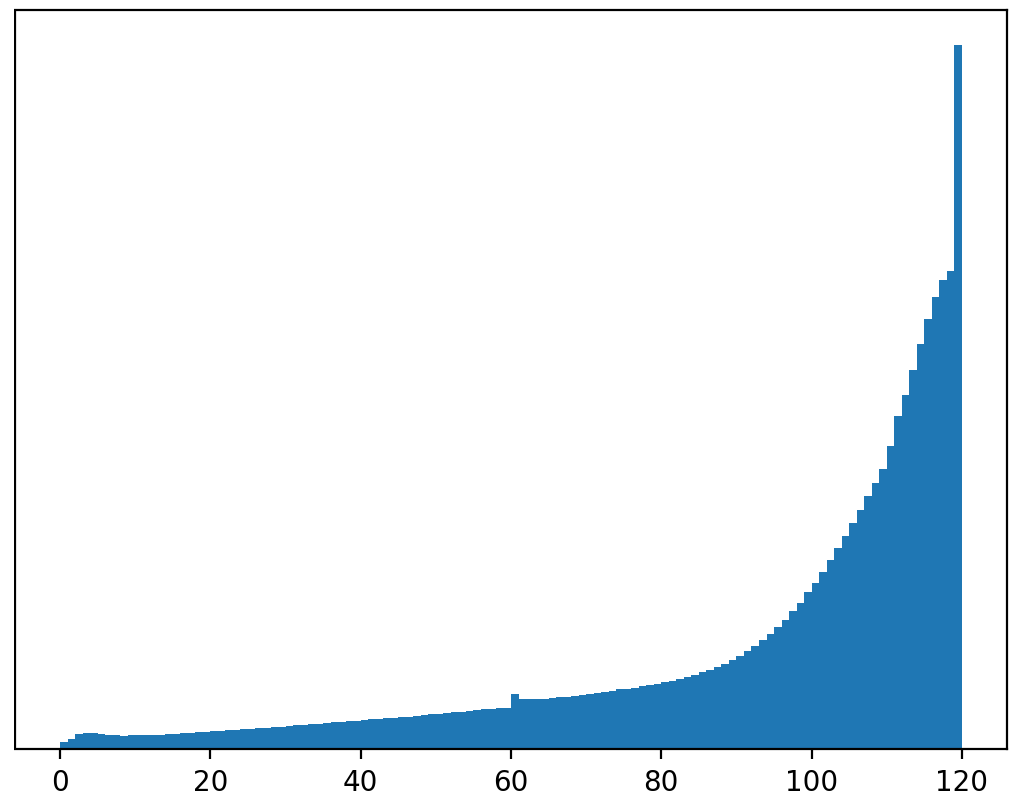 Note the blip at t=60s. This duration is over-represented due to the games that have exactly two moves with white timing out. These stem, I believe, from challenges in which the challenged player does not immediately respond, and the challenger (playing white) doesn't notice when the challenge is ultimately accepted.

Also note that the duration of the game is at least somewhat dependent on the strengths of the players. Here's a graph of the durations for games in which both players were about the same strength (Elo within 100 of each other) plotted against the players' average rating: 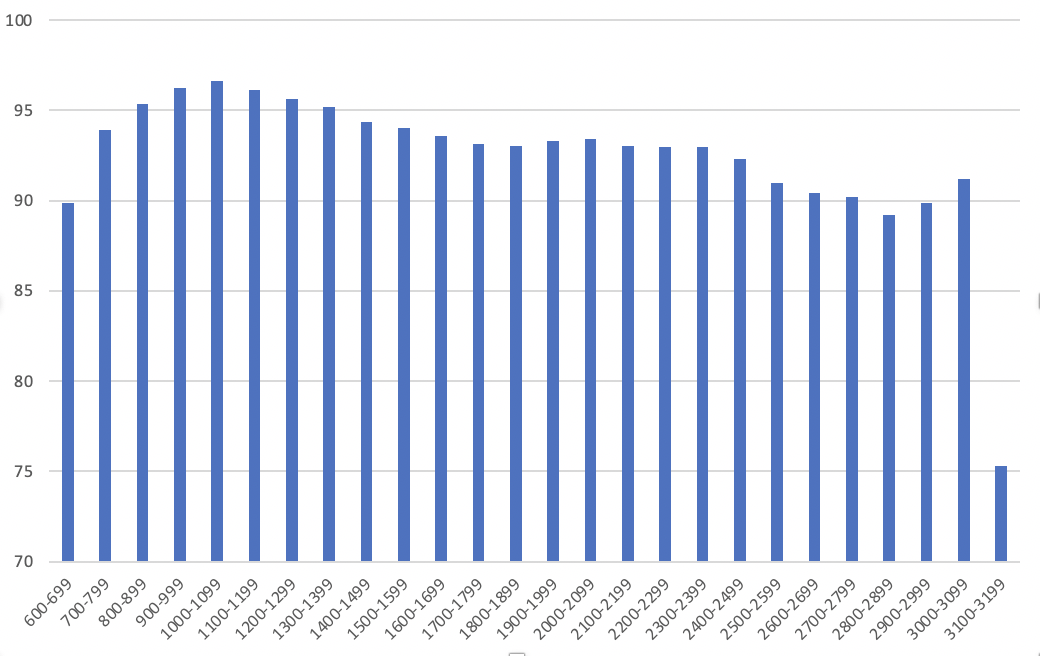 I'm guessing the sudden dip at the end is an artifact stemming from the lower game count there, although perhaps to reach that level, premoves really become much more necessary.

Collected data from the top 100 bullet players in Lichess using the berserk module from lichess api.

The function client.games.export_by_player() can give info about the games played by a player. This includes createdAt and lastMoveAt timestamps values from which we can calculate the duration of the game.

Be noted that extracting game time duration through game clk info may not be appropriate because most of these players are pre-moving. Even if their clock is at 1s some players can still make some moves with their clock still at 1s.

Bullet games from top 100 bullet Lichess players, each player has around 200 games at tc 60+0 less duplicates.

There are games that are more than 120s due to pre-moves. 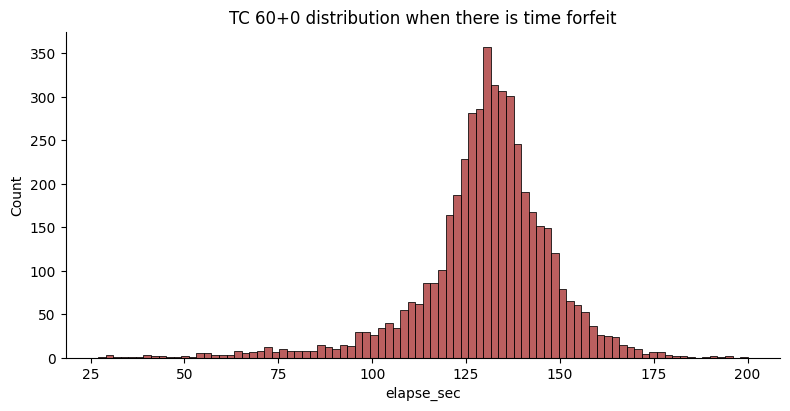 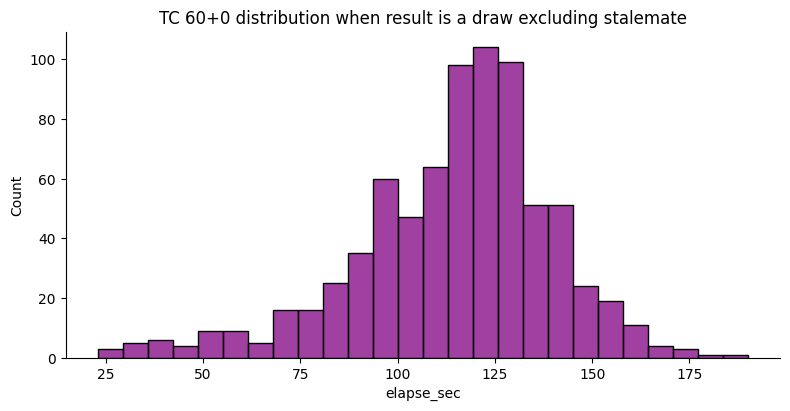 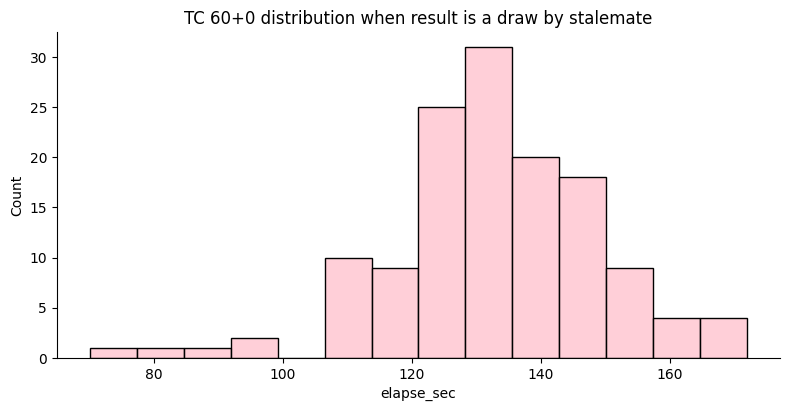 Typical game header in the pgn from pgn key of the returned request response.

Elapse time can be calculated using the EndTime and StartTime tag values. 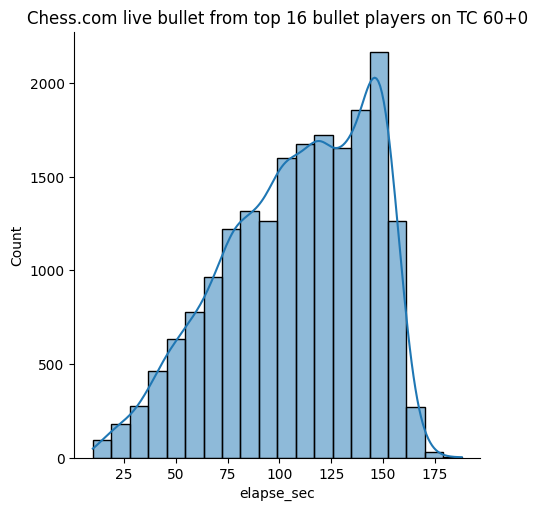 Not the answer you're looking for? Browse other questions tagged statistics bullet-chess or ask your own question.