I am referring to this picture. 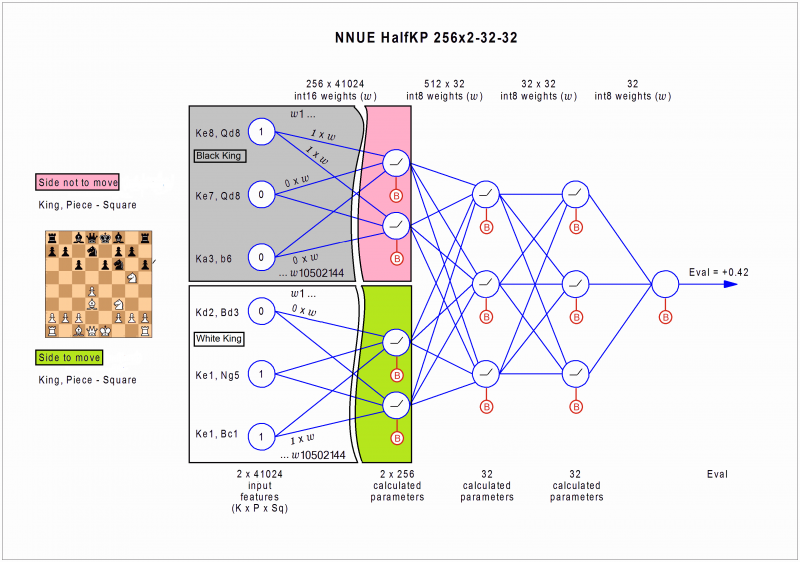 What do the individual neurons in the ANN do? Do they represent criteria for the evaluation, like for example material, pawn structure, king safety and so on?

I will extend a bit on Scounged's comment, which in principle suffices as an answer.

Indeed, each neuron is nothing more than a little funtion computer that takes all inputs, multiplies them with a weighting, and "fires" if the resultat is above some level (e.g. by a sigmoid, but 0/1 would work as well - anything nonlinear works).

The ineffability of NN always has been a main criticism against them. It is typical "emergent" behavior, and any NN that is large enough can no longer be split into sensible sub-units, even if the emulated function can. (It is very possible that a NN that simulates the KR/K mating technique is still simple enough for such an analysis.)

Not the answer you're looking for? Browse other questions tagged stockfish or ask your own question.

2
What are the scales of the numerical evaluations of the strongest engines based on?
0
What fraction of a Pawn do the most powerful chess engines (Komodo, Stockfish, Houdini, Fritz, Hiarcs, Gull, ...) use as their evaluation unit?
8
What is the optimal way to use Stockfish programmatically?
4
Leaving the score aside, what are the criteria allowing Stockfish to choose its "best move"?
5
HalfKP Structure for Stockfish / Shogi NNUE - how does it work?
1
Why was the engine giving such positive evaluations for my game with equal material?
4
Why doesn't SimpleEval's eval change in multiples of 1?
1
How do you make NNUE neural network for the newest Stockfish chess engine?
1
Detailed Stockfish Evaluation Function