Can I move a piece somewhere else if I left it but didn't press the clock?

Can I move a piece somewhere else if I left it but didn't press the clock?

Suppose I touch my queen and then move my queen, keeping it on a square, and take my hand off. Then, before I press the clock, I realize that it's a wrong move. Thus, I move the queen to a different square and then press the clock. Is this allowed, or do I have to play the queen on the first square (if my opponent calls the arbiter)?

I am getting conflicting answers. An official answer would be appreciated.

When I first started playing competitive chess 50 years ago what you describe was standard practice in blitz but not allowed in standard time control chess. Nowadays it is not allowed at all except in the case that moving the piece was not legal, for instance because it left your king in check or placed your king in check.

4.7 When, as a legal move or part of a legal move, a piece has been released on a square, it cannot be moved to another square on this move.

Legal and illegal moves are defined so:

There are two cases when the requirement for the move to be legal would allow you to take the move back, indeed require you to do so.

The first is if your king ended up being in check after your move:

3.4 The queen may move to any square along the file, the rank or a diagonal on which it stands. 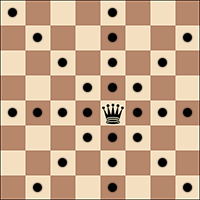 No, you may not move that piece to another square even if you have not yet pressed your clock.

When, as a legal move or part of a legal move, a piece has been released on a square, it cannot be moved to another square on this move.

(Art. 4.7 continues with further laws regarding captures, castling and promotion.)

You didn't ask, but note "legal" in the answers: if you made an illegal move, and did not press the clock, you may and must change it, and usually (modulo §E11.5, "Do not distract your opponent in any way!") get scot-free. In German even the part on the board ("Zug ausgeführt") and on the clock ("Zug abgeschlossen") have different names in the FIDE rules to easily distinguish these actions (I didn't memorize the English names).

It is not allowed to change your move: https://www.fide.com/FIDE/handbook/LawsOfChess.pdf

"When, as a legal move or part of a legal move, a piece has been released on a square, it cannot be moved to another square on this move."

Not the answer you're looking for? Browse other questions tagged rules pieces otb-chess or ask your own question.

3
In an ECF tournament, how are rapid play rules different from standard play?
3
What would happen if I touch two different pieces with each hand at same time?
9
Touch a piece and then claim opponent's previous move was illegal
14
What is the result? (Rules + puzzle)
17
Is it legal to hit the clock with piece, captured or otherwise?
31
Should a player be forced to move a piece that he has picked up after a spectator knocked it off the board?
8
Mate with both hands: Result?
8
I didn't notice that my opponent forgot to press the clock and made my move. What should I do?
5
Ignoring Touch Move results in an Illegal Move?