Is it possible for the hopper/locust to jump over unmovable squares?

If a board with unmovable squares, such as Chessence, has a Cannon on a1, and an enemy piece on a3, can the Cannon jump over the unmovable square (a2) and capture the target?

Normally, a "leaper" such as Knight is unhindered by the unmovables squares, but I believe that's the way leapers themselves moves. (Nothing could "block" them)

For lesser leapers such as the Knight in Chinese chess (Horse), an unmovable square immediately adjacent to the Horse might render it unmovable to the two squares diagonally to the unmovable square in the same direction (I believe). eg. A Horse in b2 can not move to a4 or c4.

But I don't specifically know how do "hoppers/locusts" move "behind the scene".

In the rules of hoppers, it didn't mention anything about "if an unmovable square could be counted as a 'hurdle'", so I don't really know what should I do?

Somebody please be so kind and enlighten me.

Thank you very much for your help! 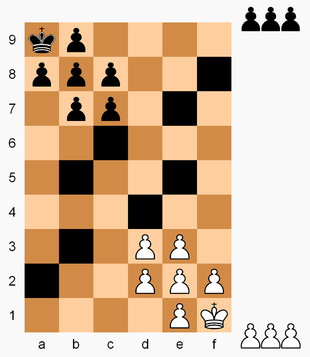 If a board with unmovable squares, such as Chessence, has a Cannon on a1, and an enemy piece on a3, can the Cannon jump over the unmovable square (a2) and capture the target?

A hopper is a piece that moves by jumping over another piece (called a hurdle). The hurdle can be any piece of any color. Unless it can jump over a piece, a hopper cannot move.

The board is a 6×9 rectangle of squares with eight squares missing. [...] A man may not move to, nor through, a non-existent (blackened-out) square; except that a man moving as a knight may jump over a non-existent square.

So the question is really whether a hopper (such as a cannon) can use a square that is not part of the board as if it was a square of the board that is occupied by a hurdle (a piece of any color).

Phrased like that the obvious answer seems that no, a square that is not part of the board is not like a non-empty square. However if we imagine that all unavailable squares are instead occupied by neutral (belonging to neither player) immovable pieces (obstacles) and we also stipulate that these pieces cannot be captured by either player or by any piece, then none of the rules of Chessence require any change. Both a void and an obstacle stop the movement of a rider such as a rook or bishop, so in that respect a non-board void square is very much like a neutrally-occupied square. Prior art for this interpretation exists as the obstacles in the Shuuro chess variant, although knights are granted the power to sit on top of such obstacles. I am not aware of any chess variant that combines hoppers with obstacles, though.

In conclusion, given that voids and obstacles are interchangeable for most rules, there is an argument to be made for either allowing or disallowing using voids as hurdles. However, games that use the language of voids should be expected to default to disallowing, and games that use the language of obstacles do not have a clear default. So be sure to talk to your opponent about the rules that you are going to play by!

Not the answer you're looking for? Browse other questions tagged rules chess-variants unorthodox-pieces or ask your own question.

7
Would certain checkmates be possible if the king could move into check?
3
Fairy endgame statistics for KDDDDvKN (D=dabbaba; '2,0' leaper)?
5
What is the maximum number of squares 8 queens and 8 nightriders can attack on a 16x16 board?
7
16 roses, 16x16 board; maximum double-attacked squares while all 256 squares are attacked at least once?
25
Is rotating a pawn so that it faces a different direction and then moves in that direction technically permitted according to the 2018 FIDE Laws?
5
Chess variants-Anyone recall the name for one that has a "superpiece" with the movements of the queen and knight?
1
What arrangement of 8 each of these 4 different compound leapers has the "strongest coverage properties" on a 16x16 board?
5
Controversy over the Xiangqi cannon piece?