Is there any correlation between average rating and the time of the day?

I play online bullet, mostly lichess, sometimes chess.com. Once I noticed that my average performance varies depending on the time of the day: e.g. at the morning I can lose 50 rating after a dozen of games, but I will easily regain it at the evening. One possible explanation is that my brain may work worse at the morning because of sleepyness or something. But can the reason be not me but my opponents?

Imagine two countries, A and B, in different time zones. Players from A and from B tend to play chess at the evening; let it be 00:00 UTC and 12:00 UTC respectively. And, for some reason, players from A are generally stronger than players from B. In the extreme example players from different countries never meet each other, so their ratings establish independently. So even if two players have similar strength, the player from B will have higher rating (because he is stronger among his population).

Another (imaginary) example about days of the week: it could be possible that on average stronger players tend to play on weekdays and weaker players on weekend, which leads to the similar effect.

Have anyone ever analyzed this kind of statistics and is the phenomenon in question possible, or it is believed that ratings are homogeneous in this sense?

I tried to calculate the day/night score rate on a couple of GMs with lichess account. Data is from the lichess bullet games. I use the UTCDate and UTCTime tag in the game header to classify day/night time.

It does not consider opponent's day/night, this is just a simple stats about the perf of the given player.

Here is the result. 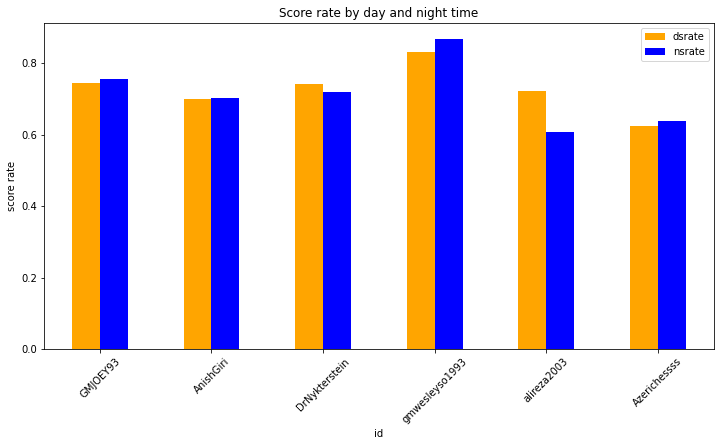 Not the answer you're looking for? Browse other questions tagged rating online-chess or ask your own question.

3
Is it possible to know an average variability of score on chess.com?

21
What's the correlation between FIDE rating and online rating?
2
Why the ratings used for different time controls are different?
9
Worrying inconsistency in playing strength
3
Are engine ratings directly comparable to human-level play?
4
Absolute strength and stability of Elo
4
Initial FIDE rating Question
1
Why the initial rating of FIDE is calculated that strangely?
7
Historical motivation for the 1200-1800ish rating average
4
List of chess players by their peak FIDE blitz rating
6
Is there a tournament system that pairs players based on ratings being similar?