How the highest Elo rating has been changing over time? Is there such an abstract data? Preferably FIDE rating.

I've been trying to find a graph or a table, but all I can find is a list of peak ratings for best players. Meanwhile I want to know the "maximum achieved rating vs time", regardless to a player, i.e. maximum of all players rating.

I wrote some queries against the database I constructed from the FIDE downloadable data, for post 2001, and Olimpbase for pre 2001.

This gave me (horizontal axis is year plus 2 digit month): 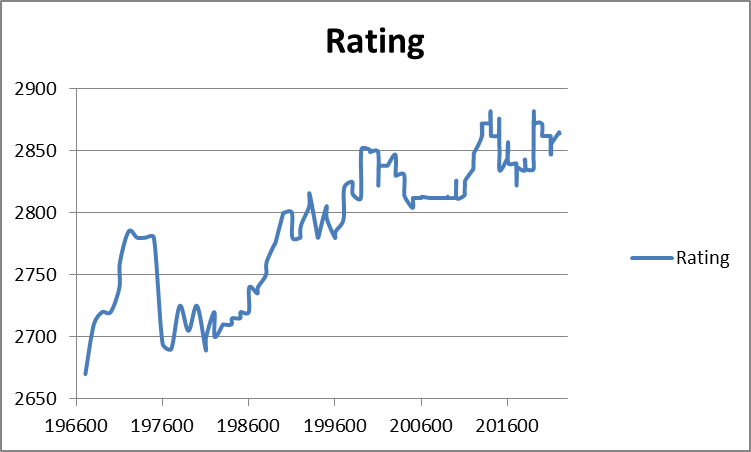 Your basic question seems to be if there are lists of top FIDE ratings. The obvious ones can be found at https://ratings.fide.com/toplist.phtml, and tell you the top 100 ratings per month from 2000. If you want earlier lists, you can typically find them printed in major chess periodicals (such as British Chess Magazine) shortly after they were issued by FIDE; a library can help you with that. I expect FIDE also could help, but there may be fees involved.

If I interpret your first question correctly, it would be answered simply by tabulating the the top rating 100 found in the lists from the referenced site.

Not the answer you're looking for? Browse other questions tagged rating statistics elo records or ask your own question.