What is the longest possible forced checkmate sequence?

The answer is "yet unknown, but we have a known current record holder".

There are two main sources for records.

OP asks for the longest win under basic rules, so Snag 1 in @HaukeReddmann's answer wouldn't apply.

Records in chess problems have already been far exceeded in tablebases so far generated, so I think these can be discounted as a pointer to the answer.

The most convincing pointer I have come across so far is "Haworth's Law". (Guy Haworth sadly died very recently.) This is available via the following link: http://centaur.reading.ac.uk/36276/3/HaworthLaw.pdf

I reproduce it here. 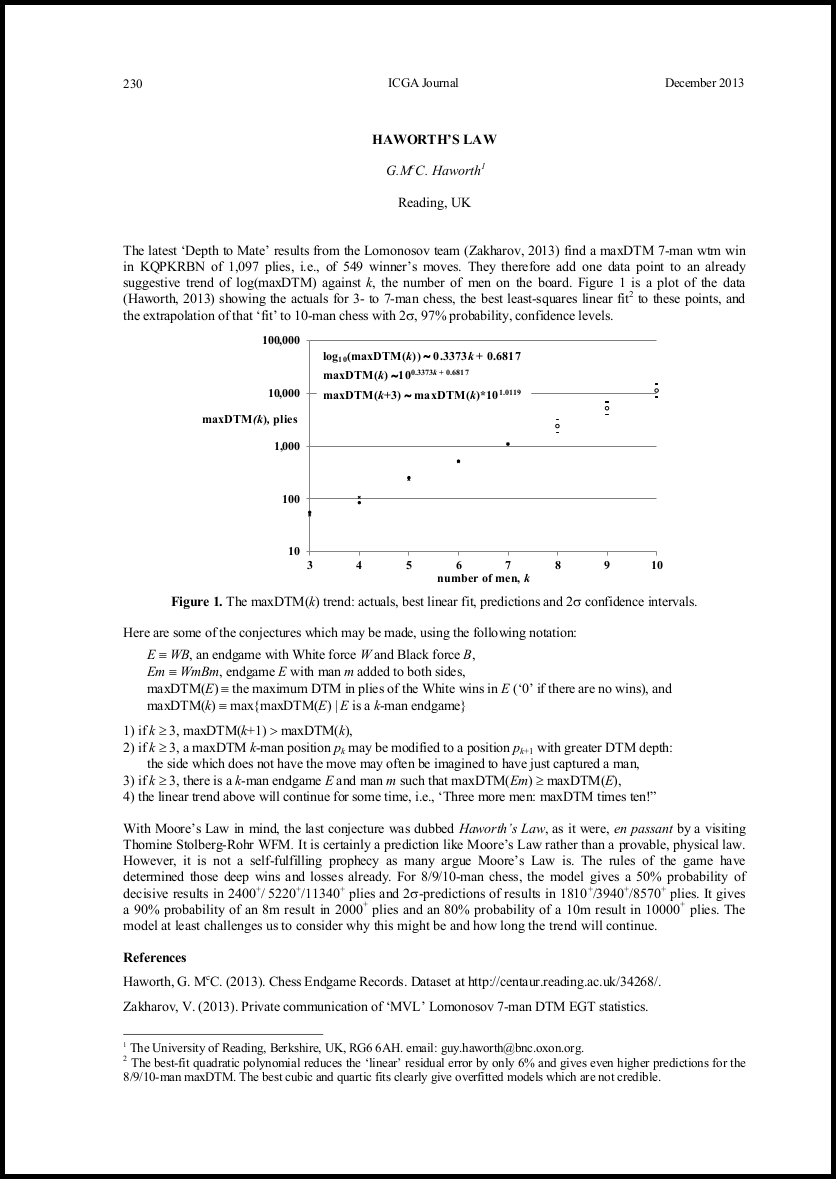 I should note that the points shown on the graph for 3 to 7 men (8 to 10 are only predictions) form a better straight line than I ever managed in my physics pracs at school. Also the conjecture has so far proved itself as a predictive method. I believe it was first proposed on the the basis of the 3-4-5 man Nalimov tables and the values for 6 and 7 man tables have morphed from predictions into verified measurements.

The author wisely doesn't predict more than a few increments ahead, but I would say that the best guess for the longest mate with 32 men would be arrived at by extending the straight line already accurately measured by the EGTBs (as you would in verifying Boyle's law or whatever).

Because the y axis is a logarithmic scale this would give a longest forced mate with 32 men on the board of around 1.2 x 10¹¹ moves. (Not a footnote; twelve hundred trillion moves in American trillions.)

One possible snag here is that the EGTBs don't exclude all illegal positions and I imagine OP is looking for the longest forced mate from a legal position.

For the EGTBs produced so far this is not a problem because the maximal mates are all from legal positions. However starting from the 12 man EGTBs some of the endgame classifications become illegal (e.g. KQQQQQQQQQQK). This effect progresses as the number of men increases until by 32 men, although the number of classifications is enormous, the only one that contains any legal positions is KQRRBBNNPPPPPPPPKQRRBBNNPPPPPPPP.

It's not clear if that would affect the rate of increase. The straight line graph for legal positions could conceivably flatten beyond 12 men (though there's no reason I can think of to suggest it would). At any rate it's hard to imagine that the author's first conjecture could fail, so on the basis of tablebase results to date, it would be reasonable to assume the answer would at least exceed the intersection of Haworth's line with the 12 man ordinate, viz. about 25,000 moves.

A second possible snag may be "Snag 2" mentioned in @HaukeReddmann's answer.

I haven't seen the paper he refers to. I would be very grateful if he could actually dig it out.

Without further details this snag is less than convincing for two reasons.

The second is that in practice it becomes apparent that one of the major factors adding to the length of a mate is actually the necessity of avoiding exchanges. Anyone who has practiced queen v rook endings will probably have come to the conclusion that he could do the things faster if he didn't have to worry about the possibility of a queen for rook exchange.

OK, in that case he's swapping down. Here is another example where a maximal length mate in bishop & knight v knight is played by Nalimov. You will notice he has any number of opportunites to make an equal swap while Black's knight is on the board, but all such swaps would immediately draw.

It may be that more cogent reason's are given in the actual paper. There is obviously a discrepancy between the paper @HaukeReddmann mentions and the predictions given in Haworth's paper but at least we don't have to wait for the end of the universe for a resolution. Haworth predicts that the 8 man tablebases should throw up a mate that needs at least 1200 moves, so the resolution should arrive with the completion of those tablebases (assuming they're DTM tablebases).

Not the answer you're looking for? Browse other questions tagged theory problems checkmate forced-move or ask your own question.