Why is this seemingly quiet and normal position actually -3?

Factors like these seem solvable (at a minor cost). Indeed, it seems like white can reroute the knight via Nd2, stop Nf4 via g3, and at worst, cover the resulting light-square weaknesses via Bf3-Bg2. Black doesn't have any immediate attack, and apart from his pawn on d4, none of his pieces are encroaching upon white's territory. Optimistically, the d5 square might even be a future outpost. Personally, I would have given such a position a "-1" -- i.e., a slight advantage for black.

What makes this quiet position so positionally dominating for black? How does the accumulation of minor positional advantages make such a large difference here?

You mentioned seven points which give Black an advantage. Here are two more:

It should be obvious that White is in hot water. You write that optimistically the d5-square might even turn into an outpost; as this line shows, Black's position is simply too dynamic, and White will need Black to misplay to even be able to think about subtle positional goals like this.

Stepping through the analysis, there are large swings in favour of black on most turns where the white knight on e4 is only protected by the pawn on d3. I'm guessing that Stockfish really likes the passed pawn on the d file.

After the white knight goes to d4 on move 10, Stockfish only thinks that white is okay after its move on move 11 (after the other knight moves to d2 and becomes a second defender of the knight on e4) and on move 14 (when there's a chance to pick up black's undefended knight on e5 in exchange for the knight on e4). As long as white can keep material even without allowing a passed pawn, Stockfish thinks it's okay. On every turn where allowing a passed pawn is the only way to keep material even, Stockfish thinks it's bad for white.

I'm no expert, but that's my guess.

Edit: I'm not sure how to include Stockfish scores in board notation here, so here's a picture. 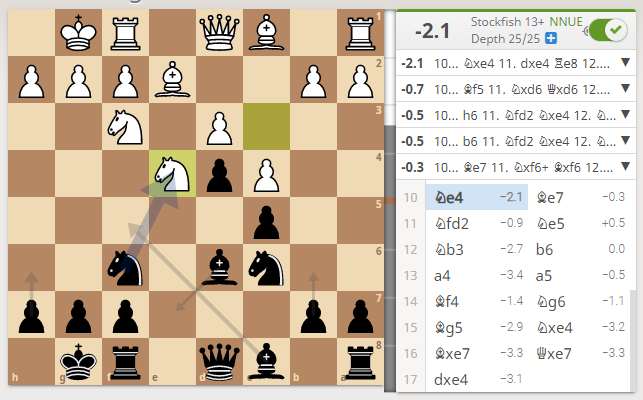 Black is simply better, a pawn up and good pieces.

What makes this quiet position so positionally dominating for black? How does the accumulation of minor positional advantages make such a large difference here?

I think you've committed a common mistake. You've assumed Stockfish evaluation score has anything to do with human evaluations. No, there isn't any direct connection. I could simply scale the scores by a factor of 10, but the engine would still play the same move. The recent introduction of neural network is making the situation even worse.

Trying to break down Stockfish's evaluation on the absolute terms like what you're doing now is ineffective. The scores are here simply to guide Stockfish what to play next.