Why does Black play b6 in these lines of the King's Indian?

In this position, White is threatening to play some combo of Bxc5 / Nxe5:

Here 11...b6 is the most popular response. My question is, why not Ne8 / Nfd7 / Nh5, since those moves simultaneously deal with White's threat while making way for the f-pawn to be pushed? Initially, I thought the reason was because it'd be somehow bad for Black if White decided to capture on c5 and Black had to capture back with the d-pawn. But consider this very similar line:

This has an ~80% winrate for Black according to the lichess Masters database, and here he's basically saying to White "please, go ahead and capture my knight! I'll capture back with the d-pawn and I'll be super happy with my position!"

So why is 11...b6 preferred to a knight move in the original position?

This is the old, old main line that is usually considered dead equal.

I can't believe the 80% winning percentage for black has to do with the objective merits of the position.

Note that Lichess' opening explorer does not show the ratings involved in those games, nor the dates. Looking at percentages only can be extremely misleading.

I think the following is happening: theory probably says that Bg5 10.Bg5 h6 11.Be3 is slightly more precise than 10.Be3, because it has provoked the weakening move ...h6, and that can sometimes be exploited.

So in the games where 10.Be3 is played, white is probably weaker on average, or he would have played 10.Bg5. That can explain the 80% score for black.

In similar fashion, the difference in frequency between ...Ng4 and ...b6 may have something to do with the time period, one was probably in fashion for a while, then the other.

I only checked Gallagher's Play the King's Indian, which contains the position after Bg5 h6 Be3 by transposition.

His assessment of ...Ng4 there is that it's obviously critical because it was played by Fischer (!) but unnecessarily risky, and he analyzes ...Nh5 and ...b6 to comfortable positions for black.

Anyway my feeling is that it's all a matter of taste.

After 10. Ng4 then simply 11. Bxc5. You lost a centralized knight but more importantly, after dxc5, white can double on the d file and try to open the centre after rd1

11.... Ne8 is passive. White probably won't play Bxc6 because otherwise the knight goes to d6. I dont think it is time to play it and f4 but since we are humans, practical chances exist. **

White has a space advantage and has a slight lead in development. Opening the position would work in white's favor. That is why i think the key move in this line is 8. D5. White shouldn't have closed the position while black should try to do it. That is why b6 is preferred. 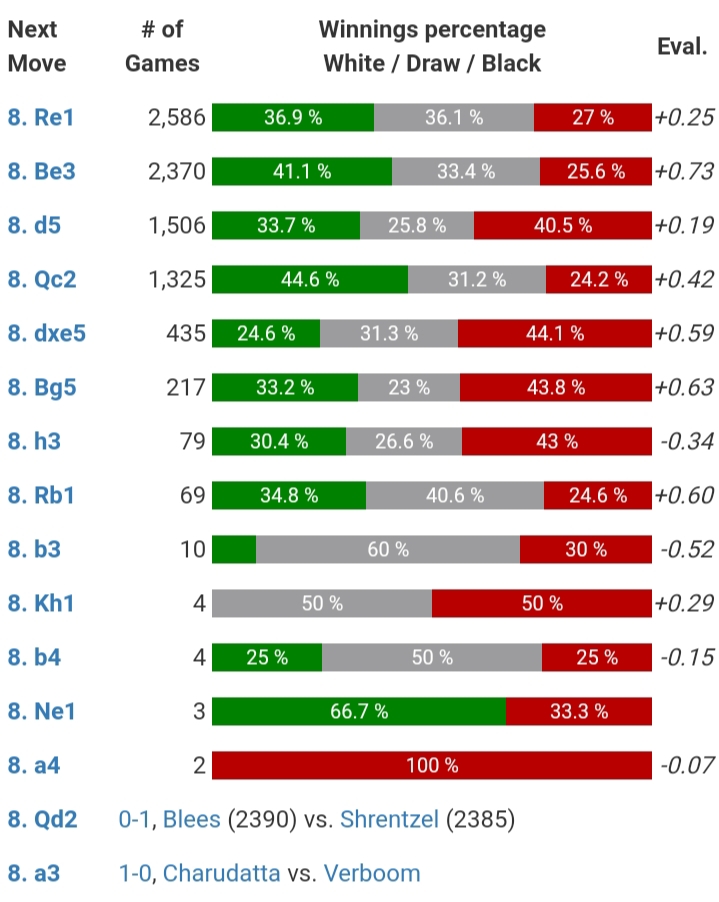 White suddenly scored lower than black after 8. D5 A computer might be able to handle blacks kingside attack but a human make mistakes. Be3 is much better. If you don't open the position, attack would come from the flank. If that flank is where your king is in, it suddenly becomes more effective than an attack on the other flank due to checks and mate threats. I would think that is why black scored high

(Note that if the resulting position is the same after either Nh5, Nfd7, if Ne8 then it shouldn't matter result wise. But some are better to sidestep some ideas from white) 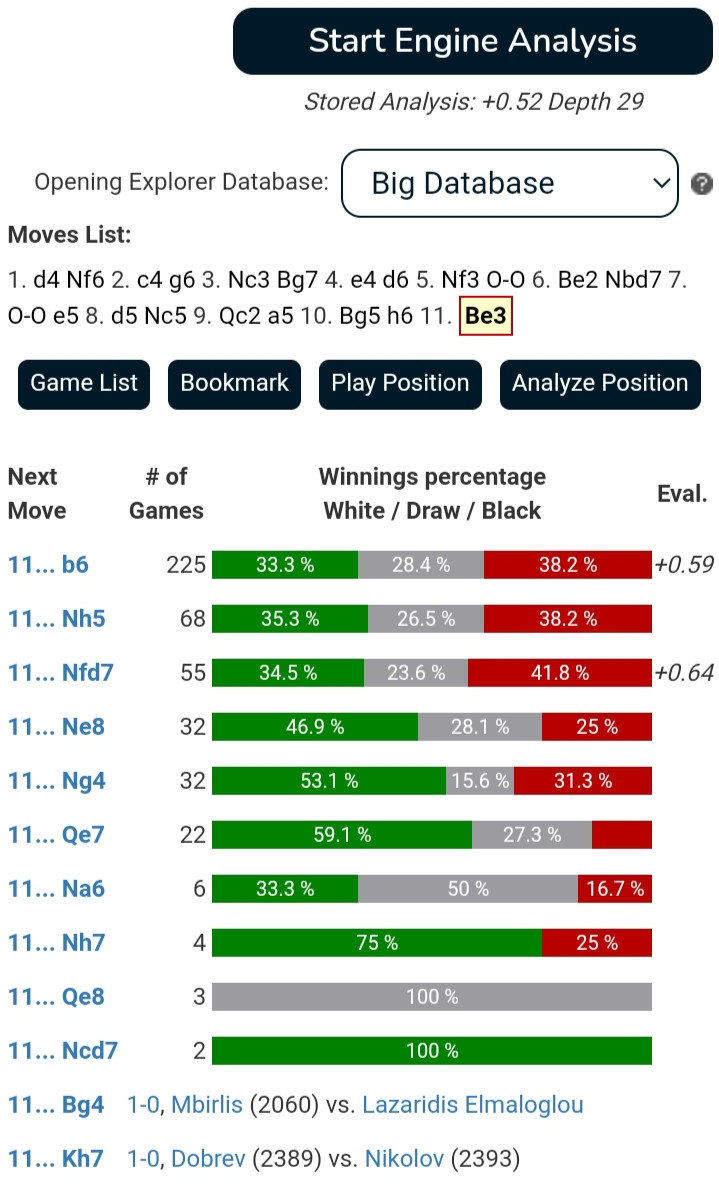 Edit: i would think statistics can describe practical chances well but there are stuffs happening too. It could be that even tho the moves are inaccurate, the opponent doesn't respond properly, the number of games are small and so on

Rizal provides a good move analysis. Positionally, the black knight at c5 is well placed and moving it would decrease its influence. Supporting the knight with b6 keeps the knight on a good square. If white takes the knight, then capturing the bishop with bxc5 keeps the center closed and opens the b file for black. This makes white's typical plan of queen side expansion difficult. Black can proceed with the usual f7-f5 plan unhindered by white's queenside pressure.

Not the answer you're looking for? Browse other questions tagged opening kings-indian or ask your own question.

4
Why is it said that beginning with 1. Nf3 2. c4 avoids the Benoni but beginning with 1. d4 2. c4 does not?
3
Exchanged Slav defense. Gambit the c6 pawn. Why not?
12
Outsmarting an intelligent copycat in the Ultrasymmetrical English
3
Why is Black supposed to attack on the kingside in the King's Indian?
4
Move orders in the 6.Qc2 Anti-Meran Semi-Slav
4
Understanding Kh1 and Be3 in the King's Indian Defense Bayonet Attack
2
Feedback and advice on a slav position for White
2
What's the point of the Two Knights French?
3
What is this line/trap in the Caro-Kann called? After Bf5, White chases Black's bishop and plays e6
2
London system move order