I was browsing the candidates' profiles of the FIDE World cup on the official website and noticed something interesting.

On the profile page of GM Vladislav Kovalev, a Belarusian chess GM, has an interesting declaration, called "Licensed", which I didn't find on the profile of any other players. 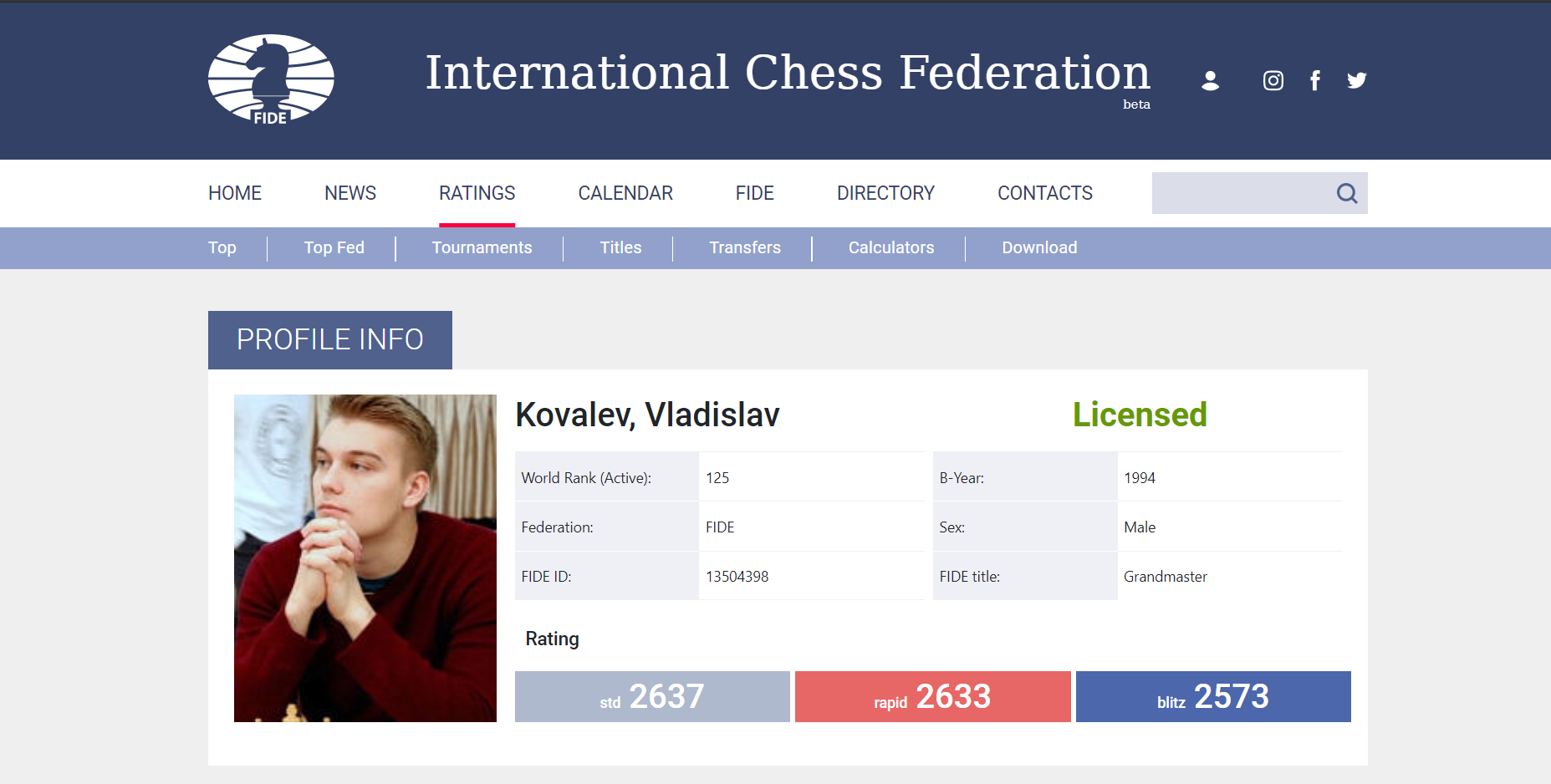 Initially, I thought that this is because he is playing under FIDE and not Belarus. So I checked the profile of GM Alireza Firouzja and there was NO such declaration whatsoever. But, I have noticed another disparity in Alireza's profile. He is enlisted under the Federation of France but his national ranking is calculated under FIDE.

Can anyone please help me to understand about what's going on?

Can anyone please help me to understand about what's going on?

Yes, it is nice that we can look up our entries on the FIDE rating website but actually there is a business need for this information for arbiters and tournament organizers to avoid fines from FIDE.

Whenever a FIDE rated tournament is rated by FIDE (standard time control only because rapid and blitz, for the moment are free) FIDE charges the federation 1 euro per player for Swiss tournaments and lower rated (average rating < 2230) round robins. The full details are given in Appendix 2 of the FIDE 02. Financial Regulations / Financial Rules (effective from 1 Jan 2021) document.

Additionally FIDE has its Online Arena where players can register directly with FIDE and play online. Online players who aren't already registered OTB with a federation get a FIDE online registration. This licenses them to play in FIDE's Online Arena but does not license them to play rated FIDE OTB tournaments.

Therefore if your federation is FIDE (for whatever reason) then you need to pay FIDE a registration fee (which ideally is more than you would pay a normal federation) before you can be licensed to play OTB.

Here are some useful extracts:

2.5 Players with no Federation are automatically considered to be ‘FIDE flag players’ and their website profile cards indicate FID as their Federation.
2.6 Players registered as FID are provisionally licensed to play over the board rated tournaments after paying the ‘FIDE license fee’ of 60 euros. ‘FIDE flag players’ are encouraged to join a National Federation rather continuing to play as FID.
2.7 The provisional license under FIDE flag expires on 30 June of the following year.
2.8 Before 1 July, the license must be renewed with a payment of 60 euros to FIDE, without further notification from FIDE, failing which the license is annulled.
2.9 ‘FIDE flag players’ with a valid provisional license are referred to as ‘licensed’ on their FIDE website profile cards

If an arbiter or organizer submits a tournament for FIDE rating which includes one or more unlicensed FID players then the federation has to pay the license fees, basically a fine. Hence this information (licensed or not) is vital for arbiters and organizers.

Here is the FIDE profile for one of these unlicensed players, Abbagouni, Raja. You will see that in the top right hand corner it says:

Not Licensed Player.
Extra fees for tournament Organizers are applicable.
Please refer to FIDE Handbook or proceed to get license

Not the answer you're looking for? Browse other questions tagged fide grandmaster world-championship or ask your own question.

11
Which chess website has the strongest players?
2
What happened to the official website for the World Chess Championship 2010?
3
What does the FIDE do besides organize the international tournament?
20
When will the 2018 FIDE Candidates tournament be held, and who will qualify for it?
3
FIDE tourney location
3
FIDE World Champions after 1993
6
Does FIDE make any money from media coverage?
3
What does the FIDE president do?
2
What does it mean for a country to be a FIDE "Affiliated Organization" instead of a FIDE Member?
0
What are the new FIDE regulations for arbiters?