I am rated 1330 for Blitz on Lichess. I was trounced by a clearly better player who had a lower ranking of 1315 for Blitz. Their profile also shows a Rapid rating of 1729.

Is it possible for these both the Blitz (34 percentile) and Rapid (70 percentile) ratings to be a true reflection of the player's ability? Both ratings are on over 300 games.

On chess.com my ratings are:

My understanding of chess doesn't change based on time control. I am poor at quickly performing safety checks and so blunder more at faster time controls.

There are several factors involved with rating differences:

First of all, offhand I don't see what advantage "differential sandbagging" would bring on Lichess, but then, I never played online. That said, I can come up with much more legit possibilities for person X having a vast rating difference in different modes:

tl;dr: I wouldn't think for a second of any foul play.

My real FIDE Elo was 2400 at max in 199x and in 2018 my real blitz rating was 17xx(Now I got few hundred points back in few tournaments). Not everybody who plays on platforms or even in tournaments have your "professional attitude" and cares about rating - I don't care about my - I play for fun, intentionally go for high risk combinations often loose to 1500-1600 players but at same time when I meet GMs I pretty often beat them or play on equals as that game for me makes sense and I'm concentrating and not playing fake combos just for fun. My online ratings are fluctuating like hell as I often play at work while in boring meetings and just resign when asked question and have to go or sometimes loose stupidly due to double focus! My own top rating on lichess is 23xx and often it falls to 22xx or even 20xx, but at the same time I have a 2400+ player against whom I lead 6:0, because I play those games - they make sense to work for me - if I play you I may easily loose as I don't care - I know I'm better player, nothing to prove.

So only 400 points diff between 2 online ratings and with different time controls - good but slow player. Or may be like me - does not care ratings!

Players like you who are analyzing his opponent ratings after the game instead of game itself never learn a game itself. If you will not change your attitude you will never learn to play chess!

This is really not a huge difference, and if you were wondering whether they are cheating, 1700 Lichess rapid is pretty low (would be about 1300 USCF). 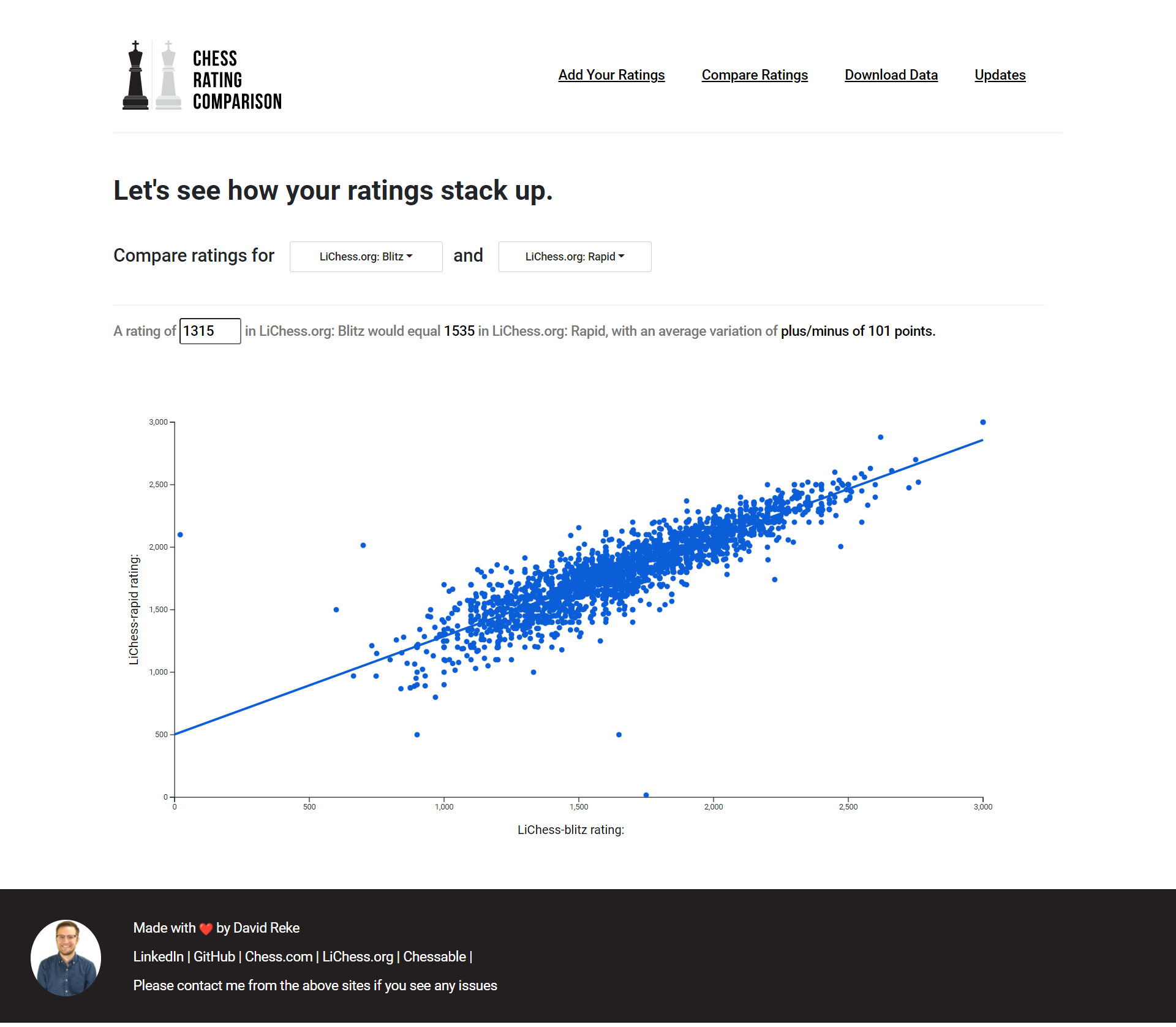 5
Illegal swiss pairings?
2
In online correspondence chess, are the ratings adjustments based on the pre- or post-game ratings?
5
Why are USCF quick ratings lower than USCF regular ratings?
8
FIDE rating in blitz
6
Relation between ratings for Chess960 and standard chess
2
Where can I find a description of the "old" USCF rating system (that was in use through the 1990's)?
5
List of chess players by their peak FIDE blitz rating
6
Is there a tournament system that pairs players based on ratings being similar?