Why is Jovanka Houska introduced as a WGM when she holds the more prestigious IM title?

I've been watching the Champions Chess Tour and find it strange that Jovanka Houska is always (at least whenever I am watching) introduced as a woman grandmaster. Now I have absolutely no problem with her holding that title, but she also holds the more prestigious international master (IM) title (in addition to being the highest-rated active British womans player and even 9-time and current British women's chess champion).

Why do they not introduce her by instead or also mentioning her higher title?

The short answer is I’m proud of both titles and I don’t mind which one is used. I always refer to myself as an IM..but there are situations where saying (or writing) WGM just fits better (because it sounds grander!) and I am happy with that. 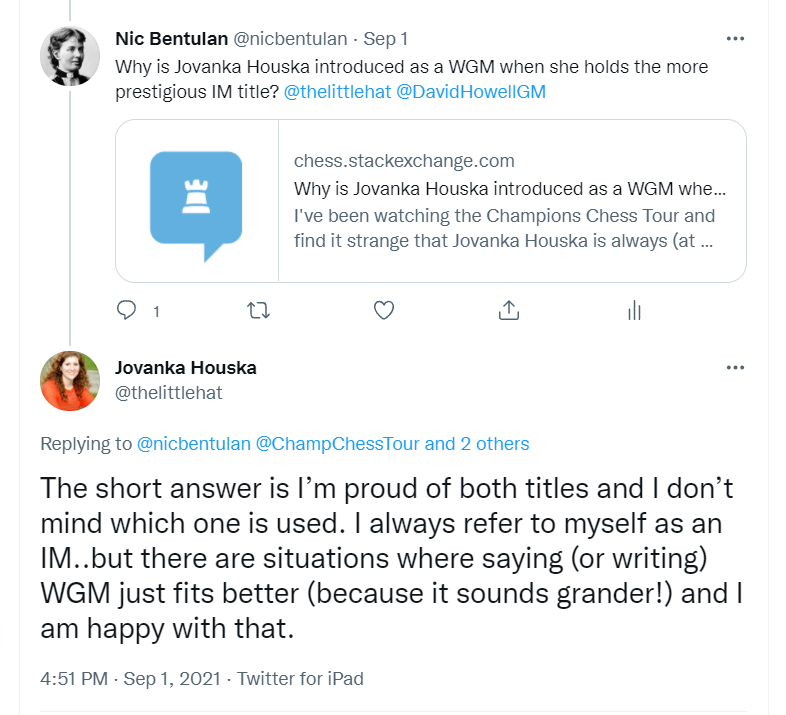 Personally, I of course find it weird that Houska doesn't mind because one title is necessarily higher than another, but I think it's just either-(humility)-or-(not minding the less-informed in chess terms) on h part.

I think an important aspect to consider is the audience of the show. For the Champions Chess Tour, chess24 has two English language shows; one with Houska and David Howell targeted to a more casual audience, the other with Tania Sachdev and Peter Leko that is aimed towards an audience that is more familiar with chess terminology and concepts.

I think a decision was made that the title of "international master" is too unfamiliar to a casual audience. Everybody knows a grandmaster is "someone who is great at chess", but only people who know chess lingo know what an IM is. I think either the producers of the show or Houska herself decided to go with the easier to understand "Woman Grandmaster" title because the viewers would better understand it to mean "a lady who is great at chess".

It is interesting to note that Tania Sachdev, herself also both an IM and WGM, is introduced as an IM on the show targeted to the more technical audience.

It's perhaps worth starting by identifying the difference between an IM and WGM title. According to the latest FIDE regulations - FIDE Title Regulations effective from 1 July 2017:

In order to achieve a norm, a player must perform at a level at least of that shown below:

Why do they not introduce her by also mentioning her higher achievements?

There is no rule requiring them to introduce her in any particular way. Generally speaking on these shows the presenters are introduced the way they want to be introduced provided it is truthful.

Famously, Judit Polgar refused to take any women's titles and only ever applied for open titles. That was her way of fighting for women's recognition in the chess world. I suspect that Houska is taking a different route by asking to be identified by her women's title. That is also a subtle way of making the point. She is a top class international player and a woman.

8
Why do women have a lower Elo requirement to obtaining (women) FIDE titles?
4
Did Jovanka Houska defend women's british chess championship?
0
Both (at least) WGM and PhD/doctorate

7
When was the FIDE title of Candidate Master first awarded?
6
Why did the USCF stop using a "grandmaster" title in 1961?
2
Why are some chess championships defended while others have the champion starting from scratch?